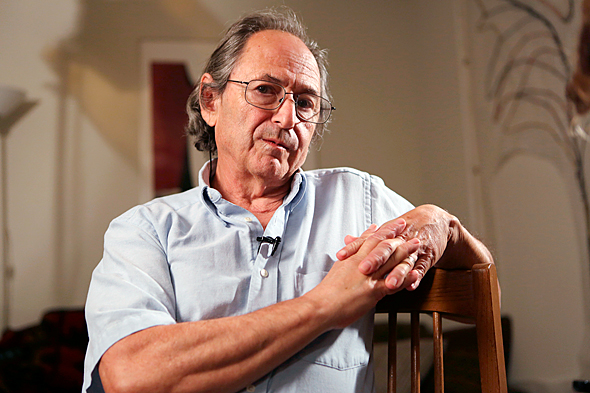 Nobel laureate Michael Levitt, an American-British-Israeli biophysicist who teaches structural biology at Stanford University and spends much of his time in Tel Aviv, unexpectedly became a household name in China, offering the public reassurance during the peak of the country’s coronavirus (Covid-19) outbreak. Levitt did not discover a treatment or a cure, just did what he does best: crunched the numbers. The statistics led him to the conclusion that, contrary to the grim forecasts being branded about, the spread of the virus will come to a halt.

The calming messages Levitt sent to his friends in China were translated into Chinese and passed from person to person, making him a popular subject for interviews in the Asian nation. His forecasts turned out to be correct: the number of new cases reported each day started to fall as of February 7. A week later, the mortality rate started falling as well.

He might not be an expert in epidemiology, but Levitt understands calculations and statistics, he told Calcalist in a phone interview earlier this week.

The interview was initially scheduled to be held at the fashionable Sarona complex in Tel Aviv, where Levitt currently resides. But after he caught a cold—” not corona,” he jokingly remarked—the interview was rescheduled to be held over the phone. Even though he believes the pandemic will run its course, Levitt emphasises his support of all the safety measures currently being taken and the need to adhere to them.

Levitt received his Nobel prize for chemistry in 2013 for “the development of multiscale models for complex chemical systems.” He did not in any way intend to be a prophet foretelling the end of a plague; it happened by accident. His wife Shoshan Brosh is a researcher of Chinese art and a curator for local photographers, meaning the couple splits their time between the U.S., Israel, and China.

When the pandemic broke out, Brosh wrote to friends in China to support them. “When they answered us, describing how complicated their situation was, I decided to take a deeper look at the numbers in the hope of reaching some conclusion,” Levitt explained. “The rate of infection of the virus in the Hubei province increased by 30% each day—that is a scary statistic. I am not an influenza expert but I can analyze numbers and that is exponential growth.” At this rate, the entire world should have been infected within 90 days, he said.

But then, the trend changed. When Levitt started analyzing the data on February 1, Hubei had 1,800 new cases each day and within six days this number reached 4,700, he said. “And then, on February 7, the number of new infections started to drop linearly and did not stop. A week later, the same happened with the number of deaths. This dramatic change in the curve marked the median point and enabled better prediction of when the pandemic will end. Based on that, I concluded that the situation in all of China will improve within two weeks. And, indeed, now there are very few new infection cases.”

Levitt compared the situation to bank interest—if on the first day a person receives an interest rate of 30% on their savings, the next day of 29%, and so forth, “you understand that eventually, you will not earn very much.”

The messages his friends translated quickly made waves in China and people wanting to make sure he did indeed write the information attributed to him started contacting Levitt. “That is how I knew I needed to continue,” he said. “I could have said, yes, that’s what I said,’ and left it at that.”

New numbers were being reported every day by various entities, such as the World Health Organization (WHO). Levitt started sending regular reports to his Chinese friends, and their popularity led to interviews on Chinese television, for example on CNN-equivalent CGTN. Based on the diminishing number of infection cases and deaths, he said, the virus will probably disappear from China by the end of March.

Initially, Levitt said, every coronavirus patient in China infected on average 2.2 people a day—spelling exponential growth that can only lead to disaster. “But then it started dropping, and the number of new daily infections is now close to zero.” He compared it to interest rates again: “even if the interest rate keeps dropping, you still make money. The sum you invested does not lessen, it just grows more slowly. When discussing diseases, it frightens people a lot because they keep hearing about new cases every day. But the fact that the infection rate is slowing down means the end of the pandemic is near.”

There are several reasons for this, according to Levitt. “In exponential growth models, you assume that new people can be infected every day because you keep meeting new people. But, if you consider your own social circle, you basically meet the same people every day. You can meet new people on public transportation, for example; but even on the bus, after some time most passengers will either be infected or immune.”

Another reason the infection rate has slowed has to do with the physical distance guidelines. “You don’t hug every person you meet on the street now, and you’ll avoid meeting face to face with someone that has a cold as we did,” Levitt said. “The more you adhere, the more you can keep the infection in check. So, under these circumstances, a carrier will only infect 1.5 people every three days and the rate will keep going down.”

Quarantine makes a difference, according to Levitt, but there are other factors at work. “We know China was under almost complete quarantine, people only left home to do crucial shopping and avoided contact with others. In Wuhan, which had the highest number of infection cases in the Hubei province, everyone had a chance of getting infected, but only 3% caught it,” he explained. “Even on the Diamond Princess (the virus-stricken cruise ship), the infection rate did not top 20%.” Based on these statistics, Levitt said, he concluded that many people are just naturally immune to the virus.

The explosion of cases in Italy is worrying, Levitt said, but he estimates it is a result of a higher percentage of elderly people than in China, France, or Spain. “Furthermore, Italian culture is very warm, and Italians have a very rich social life. For these reasons, it is important to keep people apart and prevent sick people from coming into contact with healthy people.”

China did great work and managed to gain complete control of the virus, Levitt said. “Currently, I am most worried about the U.S. It must isolate as many people as possible to buy time for preparations. Otherwise, it can end up in a situation where 20,000 infected people will descend on the nearest hospital at the same time and the healthcare system will collapse.”

Israel currently does not have enough cases to provide the data needed to make estimates, Levitt said, but from what he can tell, the Ministry of Health is dealing with the pandemic in a correct, positive way. “The more severe the defensive measures taken, the more they will buy time to prepare for needed treatment and develop a vaccine.”

Levitt avoids making global forecasts. In China, he said, the number of new infections will soon reach zero, and South Korea is past the median point and can already see the end. Regarding the rest of the world, it is still hard to tell, he said. “It will end when all those who are sick will only meet people they have already infected. The goal is not to reach the situation the cruise ship experienced.”

The Diamond Princess was the worst-case scenario, according to Levitt. “If you compare the ship to a country—we are talking 250,000 people crowded into one square kilometer, which is horribly crowded. It is four times the crowding in Hong Kong. It is as if the entire Israeli population was crammed into 30 square kilometers.” Furthermore, he said, the ship had a central air conditioning and heating system and a communal dining room. “Those are extremely comfortable conditions for the virus and still, only 20% were infected. It is a lot, but pretty similar to the infection rate of the common flu.”

As with the flu, most of those dying as a result of coronavirus are over 70 years old, Levitt said. “It is a known fact that the flu mostly kills the elderly—around three-quarters of flu mortalities are people over 65.” To put things in proportion: “there are years when flu is raging, like in the U.S. in 2017, when there were three times the regular number of mortalities. And still, we did not panic. That is my message: you need to think of corona like severe flu. It is four to eight times as strong as common flu, and yet, most people will remain healthy and humanity will survive.”