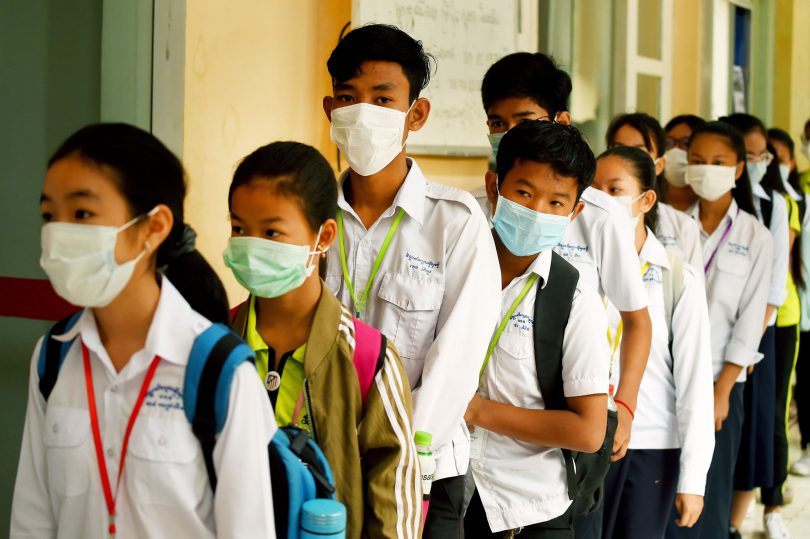 Burden of COVID-19 and epidemiologic risk factors in children
Relatively few cases of COVID-19 caused by SARS-CoV-2 infection have been reported in children compared with the total number of cases in the general population. As of Feb. 20, 2020, 2.4% of the 75,465 cases (confirmed and suspected) in China had occurred among persons younger than 19 years old. An analysis from one large city in southern China suggests that, among all cases, the proportion of children younger than 15 years old may have increased from 2% to 13% from early to later in the outbreak.

Of the cases reported in China to date, most children had exposure to household members with confirmed COVID-19. In one case, a three-month-old child visited a healthcare setting before COVID-19 was confirmed and was thought to be the first case in a family cluster—the source of infection (healthcare or community) was not determined. At least one child who primarily had gastrointestinal symptoms sought care at multiple outpatient healthcare centers before becoming a confirmed case.

During previous outbreaks caused by related zoonotic beta coronaviruses, Severe Acute Respiratory Syndrome (SARS) and Middle Eastern Respiratory Syndrome (MERS), the majority of confirmed cases occurred among adults. During the 2002-2003 SARS epidemic, less than 5% of cases were diagnosed in patients younger than 18. The majority of SARS cases in patients younger than 18 were thought to have occurred through household transmission, though some cases were hospital-acquired. The majority of MERS-CoV cases in children were also thought to be due to household transmission.

Children may play a role in the spread of SARS-CoV-2 in the community. In one report examining 10 infected children in China, SARS-CoV-2 ribonucleic acid (RNA) was detected in respiratory specimens up to 22 days after symptoms began and in stool up to 30 days after symptoms began. A case report of a 6-month-old infant describes detection of SARS-CoV-2 RNA in blood, stool, and multiple nasopharyngeal swab samples, even though the infant’s only documented manifestation of illness was one recorded temperature of 38.5° C (101.3° F). Viral culture was not performed on specimens in these reports; therefore, it is uncertain whether persistent or asymptomatic RNA detection represented potentially transmissible virus.

Currently, it is unknown if differences in reported incidence of confirmed COVID-19 among children versus adults in China is because of difference in exposures (e.g., children are less likely to care for sick contacts), disease severity, testing, or surveillance (e.g., symptoms at presentation differ from case definitions for surveillance or diagnosis).

The predominant signs and symptoms of COVID-19 reported to date among all patients are similar to other viral respiratory infections. These include fever, cough, and difficulty breathing. Gastrointestinal symptoms, including abdominal pain, diarrhea, nausea, and vomiting, were reported in a minority of adult patients.

In a report of nine hospitalized infants in China with confirmed COVID-19, only half presented with fever. At least one child to date had primarily gastrointestinal symptoms of vomiting, diarrhea, and anorexia at initial presentation. There have been multiple reports to date of children with asymptomatic SARS-CoV-2 infection.

Data from pediatric cases of SARS and MERS also show milder symptoms among children compared with adults, and adolescents with SARS had more severe symptoms compared with younger children. Co-detection of other respiratory pathogens (influenza, respiratory syncytial virus, Mycoplasma pneumoniae) have been described in children with COVID-19.

Clinical course and complications in children
Complications of COVID-19 appear to be milder among children compared with adults based on limited reports from China. Severe complications (e.g., acute respiratory distress syndrome, septic shock) were reported in one case of a 13-month old with confirmed COVID-19. Other reports describe a mild disease course, including in infants. As of February 20, 2020, just one of the 2,114 deaths among 55,924 confirmed COVID-19 cases in China occurred among children younger than 20 years old. No further details were provided about this patient.

During the 2003-2004 SARS outbreak, patients younger than 12 years old had milder and shorter illnesses than adults, and no deaths were reported. Death was rare among children with MERS. One pediatric death from MERS was reported in a child with cystic fibrosis who had respiratory specimens also positive for influenza A(H1N1)pdm09 and multidrug-resistant Pseudomonas.

Though symptoms and disease course for COVID-19 may be milder in children than adults, it is unknown if children with underlying medical conditions are at increased risk of severe disease.

Treatment and prevention
Currently, there are no antiviral drugs recommended or licensed by the U.S. Food and Drug Administration (FDA) for COVID-19. Clinical management includes promptly using recommended infection prevention and control measures (e.g., a respirator or facemask, gloves, gown, eye protection) in healthcare settings and supportive management of complications.