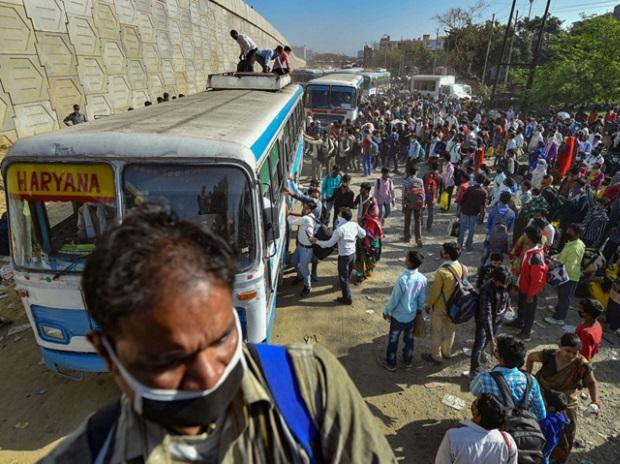 Various incidents from across India suggest that poor migrant workers have been reduced to being just bodies devoid of any humanity.

On March 24, Prime Minister Narendra Modi announced a 21-day national lockdown to try and control the spread of the deadly coronavirus (Covid-19) pandemic in the country. The lockdown entailed shutting down of all but essential services, with people not venturing outside their homes. This also meant the shutting down of all economic activity in the country, including manufacturing or building activity. What the country saw after this announcement was nothing short of a crisis, however. Instead of leading to a complete shutting down of movement across the country, it led to hundreds of thousands of migrant workers deciding to pick up their stuff and start a long march back to their villages. The story was repeated across all of India.

The scene of thousands of migrants marching on deserted highways with their luggage on their backs towards their villages was reported not just in India but all over the world. It makes one ask if our poor and migrant workers have been reduced to mere physical bodies in this coronavirus infected world. Are they just phsyical bodies devoid of any humanity in their existence? This perception was further solidified when we saw scenes of these poor migrant workers being sprayed with chemicals in Bareilly, Uttar Pradesh. Hundreds of them – including women and kids – had managed to escape starvation in Delhi and reached their homes in Bareilly but were forced to take this chemical bath to disinfect them. According to sources, the chemical used in this spray was a combination of sodium hypochlorite (bleach) and water, but district authorities explained that it was only a plain solution of chlorine and water. It is reported that this disinfectant is used by municipal corporation personnel to clean buses, floors, metallic surfaces such as door knobs and frames. A similar scene was seen in Wayanad, Kerala. After facing allegations that they had also used bleach to spray on people at a public crossing, the authorities asserted that it was only a soap solution.

Incidents like the one in Bareilly bring forth the inhuman treatment meted out to poor migrant workers. This may be happening for two reasons – one, a section of our administrative bodies have been grabbed by the middle or upper classes with their elite mentality that perceives poor migrant workers who perform low-paying jobs as unclean, dirty and possibly infected bodies. Secondly, we treat them only as inanimate physical entities, not as human beings. While a human being would have some socio-human characteristics, regarding them as mere physical bodies allows us to treat them like doors, knobs and frames.

These incidents also suggest that during these times of the Covid-19 pandemic, we are cultivating and mobilising fears and anxieties that erode human qualities such as sensitivity, concern and care (seva) from our individual and social self. These fears project our own compatriots as our possible enemies and we are trying to save ourselves from any contact with our own people. Eminent post-modernist thinker Giorgio Agamben while investigating coronavirus crisis rightly opined that we are turning into a society which has no value, other than survival. He further said that the coronavirus condition is transforming us into a society, which no longer believes in any thing but ‘bare life’. We are losing friendships, affections, religious and political convictions.

Taking a clue from Agamben, we can even say that as human beings we are nowhere, only our machine produced and internet, smartphone circulated messages are everywhere. Our human responsibilities have been reduced to mere messages on social sites and smartphones.

The fear of ‘getting sick’ makes us more selfish and self-centered. Agamben rightly observed that fear is a poor advisor. Bare life and the fear of losing it is not something that unites people but blinds and separates them. Prime Minister Narendra Modi perhaps hinted at something similar when he appealed people to practice social distancing but emotional closeness. This emotional closeness may save human nature and humanity in our beings in this time of crisis.

The recent incidents with poor migrant workers that we have witnessed during this lockdown shows that we are not according proper human and civilised treatment to them, neither in their homeland nor in their home state. Recently in Siwan district of Bihar, returning migrants who had somehow managed to reach their home district were put in a small space locked by an iron gate in very infectious conditions. They cried and appealed for rescue the entire night. They were taken out and taken to isolation centers in their respective panchayat aboard trucks, packed like cargo.

These incidents only highlight how we don’t consider the poor as valuable human beings. They are just possible carriers of a deadly pandemic. Compare this to how the government brought back stranded NRIs from Covid-19 affected countries like China. The Chief Minister of Bihar, Nitish Kumar also opined that the movement of the migrant workers will break the lockdown and disseminate the disease. These very migrants help their home state by sending money back home, money earned through their hard work but now they find that governments have turned their backs on them and treat them as vectors while putting them under constant surveillance.

Theoretically speaking, the situation of migrant labour in India emerging out of the coronavirus crisis is unique. Neither Adam Smith’s theory of labour value in capitalism nor Marx’s concept of labour power help us in explaining or understanding this situation.

Only post-modernist theoreticians such as Foucalt and Giorgio Agamben’s notions of bio-politics of the state may help us understand it but even they do not fully apply to this situation. Only the Agambenian notion of a biological body, the notion of bare life with no human value attached to it can seemingly explain this situation and behaviour.

As the country grapples with coronavirus, hopefully we will not lose our sense of human value, dignity and respect for our fellowmen. Coronavirus may infect our bodies but must not be allowed to infect our hearts and minds.