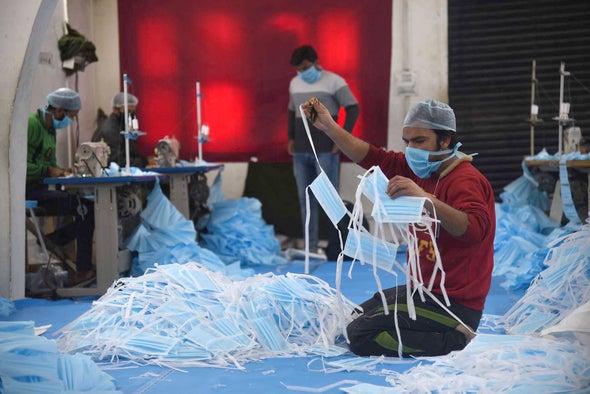 Slated for human trials, EIDD-2801 could become the first pill for COVID-19.

An oral medicine was able to hinder the coronavirus behind COVID-19 as it attempted to replicate itself in human lung cells in test tubes, scientists reported Monday. It also hampered closely related coronaviruses from reproducing in mice for several days and improved their lung functions.*

The drug, called EIDD-2801, interferes with a key mechanism that allows the SARS-CoV-2 virus to reproduce in high numbers and cause infections, the researchers explained in the journal Science Translational Medicine. Human trials have not yet been done, but if the effect is similar in people, the drug would be the first pill available to help with the COVID-19 pandemic, which has resulted in more than 1.3 million cases and about 76,400 deaths worldwide. An oral medication would be a boon, because it would be easier to give to more people than an intravenous injection.

The study was done by a team at Emory University, the University of North Carolina at Chapel Hill and Vanderbilt University Medical Center in Nashville, Tenn. A company that has licensed the drug, Ridgeback Biotherapeutics, has just been granted permission from the U.S. Food and Drug Administration to begin 10 patient trials of the antiviral pill in the next few months.

The same university collaboration had already found that Gilead Sciences’ experimental medicine remdesivir was effective in shutting down replication of the coronaviruses that caused the original SARS and MERS epidemics. Remdesivir has received attention because it entered clinical trials against SARS-CoV-2 in March, and the first results may come by late April. The findings announced yesterday indicate that EIDD-2801 was possibly even more successful in disrupting coronavirus replication than the Gilead drug. On March 20 the researchers investigating EIDD-2801, co-led by Tim Sheahan of Chapel Hill, posted the results of their animal studies on the preprint server bioRxiv while submitting them for peer review. Given the current COVID-19 crisis, “it was important to share,” says George Painter, a professor of chemistry and executive director of the Emory Institute for Drug Development, which first produced the drug.

Back in 2018 Painter and the labs he leads identified EIDD-2801’s activity during a search for a universal influenza medicine. Last October, before the pandemic hit, the Emory program got $15.9 million from the National Institute of Allergy and Infectious Diseases to perform human tests of the drug against the flu virus that was likely to be circulating later in the year. When SARS-CoV-2 emerged, Painter’s group immediately shifted focus.

EIDD-2801 inhibits the coronavirus’s self-copying operations in a manner that is different from remdesivir. While remdesivir brings that replication process to a full stop, EIDD-2801 introduces mutations—mistakes—into the virus’s RNA as it makes copies so that the viral RNA becomes so damaged that it cannot infect cells. Another feature of the drug is that it is able to work against a host of other RNA viruses. Thus, it could serve as a multipurpose antiviral, much in the way some antibiotics can work against a wide variety of bacteria. In several preclinical studies, researchers from multiple labs have shown that EIDD-2801 was effective against several strains of influenza, as well as the viruses for respiratory syncytial virus and the viruses for chikungunya, Venezuelan equine encephalitis and Eastern equine encephalitis—all microbes that intermittently pop up in different parts of the world and produce widespread sickness in their wake.

The compound may be initially beneficial as a “prophylaxis [that] health care workers can take to prevent an infection,” says Wayne Holman, co-founder of Miami-based Ridgeback Biotherapeutics, which has licensed the drug from Emory’s nonprofit biotech company Drug Innovation Ventures at Emory (DRIVE). Another potential use of EIDD-2801 might be to protect uninfected nursing home residents and workers if an outbreak occurs inside a facility. Holman says the wider goal is to have an oral pill that can be taken twice a day by patients at home early in the course of the disease to prevent it from progressing to hospitalization, mechanical ventilation or death.

In addition to planning clinical trials in the U.S., Ridgeback has also asked U.K. authorities to start tests there as well. “We’ve done three to four years of development work in just the past three to four weeks in response to the new pandemic,” Holman says.