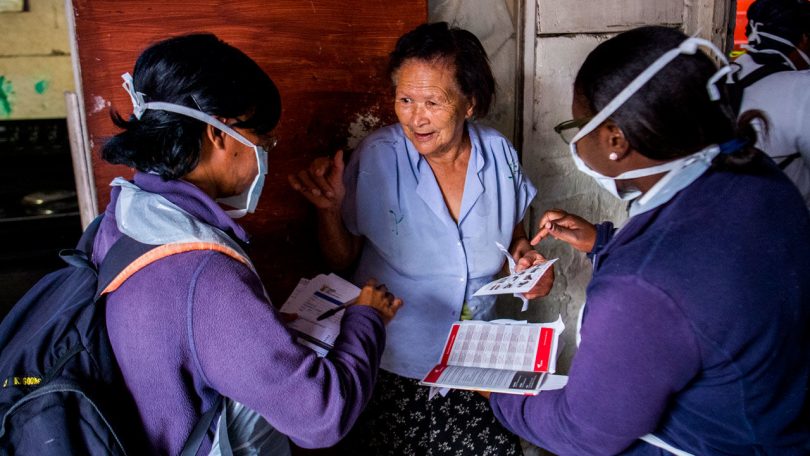 As the COVID-19 pandemic sweeps into South Africa, the decades the country has spent fighting the world’s worst combined epidemic of tuberculosis (TB) and HIV could give it an advantage. But those infections could also worsen the pandemic’s impact.

By 6 April, South Africa had 1686 confirmed COVID-19 infections, the highest number on the continent—and that is almost certainly an undercount. At the same time, one in every five people aged 15 to 49 is HIV positive and two to three people die every hour from TB. South African scientists hope the resources and health networks built to fight those diseases will help them battle the new pandemic. “The COVID-19 response draws on the same skills as TB and HIV,” says Gavin Churchyard, director of the Aurum Institute, a Johannesburg-based research and health care nonprofit.

Infection control measures are similar for COVID-19 and TB, he points out, because both seem to spread through exhaled droplets. That means health care workers are familiar with the protective gear they need to treat suspected COVID-19 patients. And South Africa’s government is repurposing the aggressive “find, treat, and prevent” strategy that’s key to its HIV response, Churchyard says. It began to send mobile COVID-19 testing clinics into densely populated areas this week to identify cases and contacts.

His institute has “massively slowed down” its regular research activities, stopped recruiting patients into clinical trials, and mobilized its 3000-strong staff—80% of whom are frontline workers—to help national COVID-19 testing and contact tracking efforts. Aurum’s researchers also plan to study treatments and vaccines and will monitor how well South Africa’s COVID-19 response is working, Churchyard says.

The African Health Research Institute (AHRI) in Durban, South Africa, which normally focuses on HIV and TB, has redeployed its entire infrastructure and staff to fight the pandemic. It has made its mobile clinics, community workers, and labs available for coronavirus testing, and its researchers will help run a trial to see whether chloroquine can protect health care workers. Funders—which include the Wellcome Trust and the Howard Hughes Medical Institute—have been “astonishingly flexible,” says AHRI Director Willem Hanekom.

COVID-19 is just beginning to take a toll across Africa, but South Africa and many other countries have already instituted local or nationwide lockdowns. Many countries face the question of whether existing illnesses will worsen the pandemic’s impacts. In South Africa, two national surveillance sites, one run by AHRI and the other by the South African Medical Research Council and the University of the Witwatersrand, will screen 40,000 households in areas with high rates of TB and HIV. Researchers hope to learn whether HIV positive people have impaired immunity to the new coronavirus, and how lung damage from TB might influence disease outcome. They will also investigate the impact of the nationwide lockdown on rural households, as well as on mental health, says Kobus Herbst, who heads the South African Population Research Infrastructure Network, which includes Aurum and AHRI.

A Cape Town, South Africa, laboratory run by the Desmond Tutu HIV Foundation is also joining the effort. The lab studies how TB is transmitted by putting patients in phone booth–size rooms and sampling their exhaled air for microorganisms. It is planning to see whether the same technique can detect the new coronavirus, which could yield a way to diagnose asymptomatic COVID-19 cases, says foundation leader Robin Wood. “I do think our observations of transmission of TB and COVID-19 will have comparative relevance,” he says.

Churchyard thinks South Africa is in for a rough ride. Despite the millions spent fighting TB and HIV, the death toll from both remains among the highest in the world. “Just having this technical capacity does not guarantee that we will contain this new epidemic,” he says.

For him, the disease has already hit home. Last week, Aurum senior researcher and HIV prevention stalwart Gita Ramjee became one of the first people in South Africa to die from COVID-19. That was a heavy blow, Churchyard says, but it galvanized him and his colleagues. “Gita was a fighter. She would want us to be out there doing what we can.”