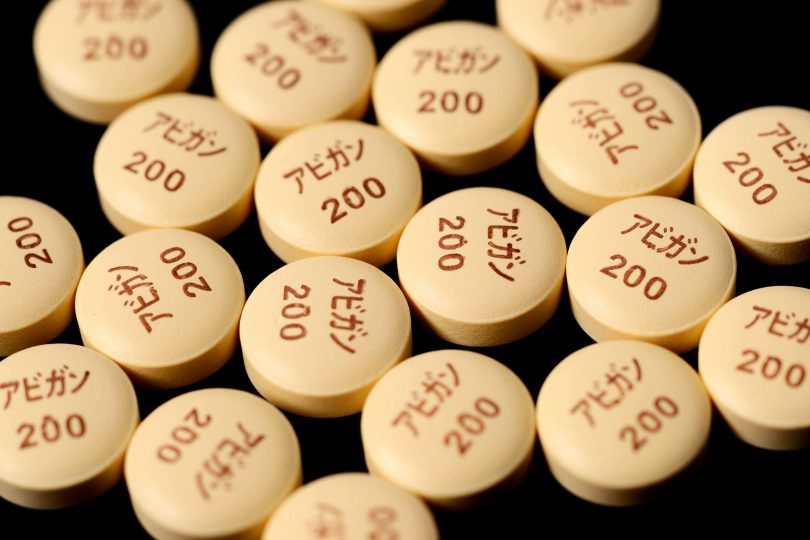 Based on a compound discovered in 1998, the antiviral favipiravir is already being used in Japan and Turkey. Its maker? A subsidiary of Fujifilm.

IN LATE FEBRUARY, executives at Fujifilm’s Tokyo headquarters scrambled to coordinate with a team of 100 employees who would be responsible for a task unprecedented in its 86-year history: Japan’s health minister, Katsunobu Kato, had enlisted the camera and imaging company’s help to fight Covid-19. At that point only some 130 people in the country were infected. But a pandemic was in sight.

With the outbreak spreading fast and no vaccine or treatment on the horizon, Kato hoped to find an existing drug that could be used to treat the wave of patients that was sure to come. One candidate was an anti-influenza drug called Avigan, which had been developed decades earlier by the Fujifilm subsidiary Toyama Chemical.

In the weeks that followed, the Fujifilm team managed more than some governments could claim to have done in response to the spread of Covid-19: Working from different offices and factories, members of the group made contingency plans for ramping up production of the drug, advised clinical researchers throughout Japan, and helped get the drug to hospitals where its use had been approved by the government as an emergency measure to treat dozens of Covid-19 patients. On March 28—last Saturday—Prime Minister Shinzo Abe told reporters that his government had begun the formal process for designating Avigan as Japan’s standard treatment for Covid-19.

A critical step in that process involves clinical trials, one of which will conclude at the end of June. And while there is not yet any detailed data supporting Avigan’s effectiveness as a Covid-19 treatment, there are some reasons for optimism. One of them arrived on March 17, when Zhang Xinmin, an official at China’s Ministry of Science and Technology, said that favipiravir, the generic version of Avigan, had proved to be effective in treating Covid-19 patients at hospitals in Wuhan and Shenzhen.

It was, Zhang said, “very safe and clearly effective” for treating Covid-19 patients. And while the data and methodology behind Zhang’s claims have not been made public, he did announce some of the conclusions doctors had drawn from them: At a hospital in Shenzhen, Zhang claimed Covid-19 patients treated with favipiravir tested negative for the virus after a median of four days, rather than the 11 days it took for members of the study’s control group to test negative; in another study carried out in Wuhan, patients taking the drug allegedly recovered from fever nearly two days earlier than those who did not take the medication.

Such results, preliminary and unconfirmed as they are, would seem to conform with the way favipiravir works. Unlike most other influenza treatments, which inhibit the spread of the virus across cells by blocking the enzyme neuraminidase, favipiravir works by inhibiting the replication of viral genes within infected cells, thereby mitigating the virus’s ability to spread from one cell to another.

What this means, in practical terms, is that patients who take the drug while their viral load is low or moderate may prevent it from making them any sicker. And there is some evidence that favipiravir can achieve these same effects in viruses other than influenza. Prime Minister Abe seems to be among the believers, and on March 28 he announced that Japan will “start to boost production and proceed with clinical research in cooperation with those countries that wish to join us.” He also said that many countries had already expressed an interest in the drug.

Though Abe did not mention any of those countries by name, one of them seems to be the United States. According to a recent report in Politico, Fujifilm has discussed with the FDA and the US Department of Health and Human Services the possibility of Avigan trials in the US, and it is seeking research funding from the US government. After Abe spoke to President Trump by phone about Avigan, the report says, the White House National Security Council began pressuring the government to accept a donation of Avigan from Japan and asking the FDA to authorize its use on an emergency basis.

IN LATE 2014, favipiravir was deployed as an emergency treatment in West Africa, where an Ebola outbreak of unprecedented duration and scale was killing thousands of people. With the support of the World Health Organization, Doctors Without Borders offered the drug to a broad swath of infected patients on a compassionate use basis, provided that they were not pregnant, since favipiravir can cause serious birth defects.

A study concerning its use in Guinea showed promising, though not definitive, results: When administered to patients with low to moderate viral loads, favipiravir cut Ebola’s mortality rate in half, from 30 percent to 15 percent. Now, five years on, Japan’s government hopes it will have similar benefits against Covid-19, which as of April 3 had killed 61 of the 2,617 people who tested positive for the virus in the country.

Fujifilm has refused to comment on China’s claims about favipiravir—it was not involved in the clinical trials carried out in China, which relied on drugs produced by its former manufacturing partner, Zhejiang Hisun Pharmaceutical, which has been China’s main producer of favipiravir since Fujifilm’s patent on the drug expired there last year.

The company received government approval to manufacture the drug for new and recurring influenza in mid-February, as well as approval for starting clinical trials to determine its efficacy against Covid-19. By late March, once trials had concluded, China had begun exporting favipiravir. In Turkey, health minister Fahrettin Koca said a shipment of the “special drug” from China was being used to treat Covid-19 patients in 40 different cities.

Japan, too, seems to have recognized Avigan’s utility as a tool of soft power. Three days after Zhang announced that the drug had been effective in clinical trials in China, Indonesian president Joko Widodo told reporters he’d imported 5,000 doses of Avigan, and that he was “in the process of ordering 2 million more.” This highlights the tension between hope and science in the battle to save lives from Covid-19—while not yet officially Japan’s go-to treatment for the novel coronavirus, Avigan has been successfully used to treat dozens of Japanese patients, according to Prime Minister Abe.

And while Japan’s government is waiting on the results of its own clinical trials before deploying the drug on a mass scale domestically, it seems willing enough to let countries like Indonesia roll the dice on it.

Indonesia is not the only country that would be trying its luck—Fujifilm told me a number of other countries have made inquiries or requests for Avigan, but the company declined to name them and won’t say how much of the drug it will be exporting.

Favipiravir is not the only existing drug to be put forward as a potential Covid-19 treatment. A study published in The New England Journal of Medicine in March showed that the HIV drug Kaletra failed to produce better results than standard care when administered to Covid-19 patients in Wuhan over a period of 14 days. Remdesivir, an experimental antiviral drug developed by biotech giant Gilead, is the subject of two clinical studies in China, which are supposed to yield results in late April. Meanwhile, a clinical trial is now underway in Italy, Spain, Germany, France, and elsewhere to test the efficacy of Kevzara, a rheumatoid arthritis treatment that some believe may calm an overactive immune response that in some Covid-19 patients can damage lung tissue even after much of the virus has passed from the body.

Perhaps the most controversial Covid-19 treatment so far has been the combination of hydroxychloroquine and chloroquine, two anti-malaria drugs first approved by the Food and Drug Administration more than six decades ago. On March 21, President Donald Trump sent a tweet endorsing their use as a Covid-19 treatment, citing a French study which involved only 42 patients. Days later, an Arizona man who watched Trump’s televised briefings—where he also enthused about the drugs—died after ingesting a form of chloroquine sold as a fish tank additive. (A statistically insignificant study published in the Journal of Zhejiang University found hydroxychloroquine to be no more effective than conventional treatment.)

MEDICINES, LIKE PEOPLE, sometimes take unusual routes to get wherever it is they are going. When Toyama Chemical began working with virologist Kimiyasu Shiraki to develop a new anti­viral compound in 1990, the company had in mind a treatment for herpes. Eight years later, it shifted gears after Shiraki instead stumbled on a compound that showed promise as an influenza treatment. Toyama Chemical worked to perfect the drug, dubbed favipiravir, even as the cash-strapped company sold part of its shares to a different pharmaceutical company in 2002. When Fujifilm acquired the company in 2008, the camera and imaging company was keen to move forward with the drug’s development.

During years when its longtime rival Kodak inched closer to Chapter 11 bankruptcy (which it filed for in 2012), Fujifilm diversified its operations. Health and medicine, which now account for 20 percent of the company’s overall sales, is a particularly attractive market in Japan, where more than one-fourth of the population is 65 or older. In 2014, Japan’s Pharmaceuticals and Medical Devices Agency finally approved favipiravir, which was put to the test against the Ebola virus later that same year in West Africa.

Among those researchers who studied favipiravir’s efficacy against Ebola was Xavier Anglaret, who worked as part of a team from Inserm, France’s National Institute of Health and Medical Research, as it conducted two clinical trials and one cohort study in Guinea starting in late 2014. His team was rushed there from Côte d’Ivoire, where they had spent the previous 20 years conducting clinical trials, starting with HIV in the early 1990s.

On Friday, when I spoke with Anglaret by phone, he told me he sees some “striking parallels” between the Covid-19 outbreak and what he witnessed during his time in Guinea. “Of course the diseases are not the same, but for us—for researchers and physicians—the challenge is almost the same,” Anglarat tells me from his office in Bordeaux, France.

That challenge, he says, is to set up clinical trials in just days or weeks that might answer important questions about whether or not existing drugs can effectively treat Covid-19. The big difference this time around, he said, is the globalization of the current pandemic. “We are all overwhelmed by what is happening in our own countries,” he says. “We are working 20 hours a day.”

For Anglaret, these long hours have been spent trying to set up a trial in France to assess the efficacy of certain existing drugs in homebound Covid-19 patients over the age of 65. One of the drugs they’ll be testing is favipiravir, for the same reasons that they tried it against Ebola in Guinea: It’s easy to administer at home, even for old people, and it’s an antiviral potentially effective against a wide spectrum of viruses.

Along with the familiar yellow pills, Anglaret has encountered some familiar challenges, including shortages of equipment and materials. “There are some difficulties that look like what we knew in Guinea,” he says. “It’s very strange to see this in French hospitals. I didn’t think it could happen.”

Still, he says, the conditions of care in French hospitals are much higher than those in West Africa. What could happen there in days to come, he says, is “much, much more terrible.”