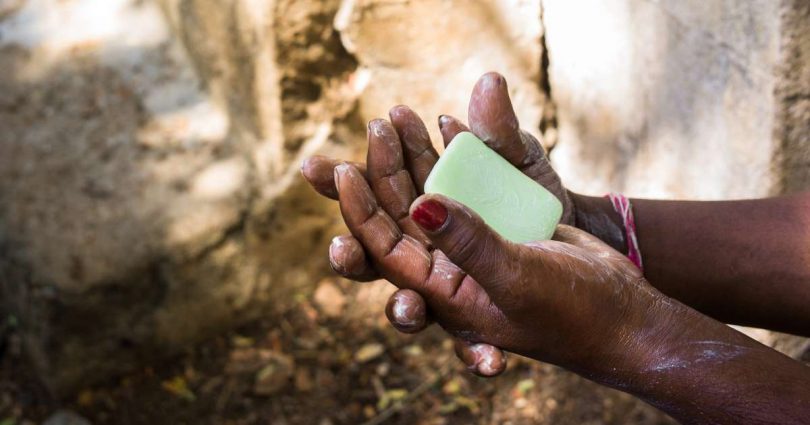 Only a fifth of all households in this nation of 1.3 billion have piped running water. That makes frequent handwashing a challenge.

DELHI, INDIAIn the village of Kaithi, in the Bundelkhand region in north central India, there is one shared tap for every five households. Bundelkhand has suffered 13 droughts in the last two decades. Water shortage is a way of life there. And with COVID-19 now spreading rapidly, people in Kaithi and other villages face a disconcerting choice: They can wash their hands or they can keep their social distance, but it’s hard to practice both methods of warding off the disease at the same time.

“We are not allowing too many people to crowd around the taps and trying to wash our hands as much as possible,” said Kaithi resident Mangal Singh. He left his job as a driver in Delhi to return to his native village around two weeks ago, just before Prime Minister Narendra Modi ordered India’s 1.3 billion citizens to stay inside their homes for at least three weeks.

On March 31, India’s water ministry urged state governments to spread the second message, agreed on by experts around the world: Washing hands with soap and water for 20 seconds, repeatedly throughout the day, is critical. But in India and many developing countries, the message ignores an important question: What if you don’t have enough clean water?

If you add up all the situations in which international authorities such as UNICEF recommend washing hands during this pandemic—after visiting a public space or touching a surface outside the home, after coughing, sneezing, or blowing your nose, and of course after using the toilet or taking out garbage and before and after eating—it easily amounts to at least 10 times a day.

For this country especially, that’s quite a lot of handwashing. A single 20-second wash plus wetting and rinsing uses at least two liters of water, more than half a gallon. For a family of four washing 10 times a day each, that’s 80 liters just for handwashing—an unimaginable luxury in much of rural India. (The average American uses 100 gallons—around 379 liters—of water daily.)

Last year, Chennai, India’s sixth-largest city, ran out of water during a prolonged drought. The NITI Aayog, a policy think tank for the Indian government, released a report on the country’s ongoing water crisis that found 82 percent of rural households, 146 million homes in all, do not have piped running water. Nearly 60 percent of urban households don’t either.

The problem in India isn’t just lack of infrastructure: More than half of India’s districts, a World Bank report says, are threatened by groundwater depletion or contamination. This year, even before summer, almost 33 percent of India is already experiencing droughts or drought-like conditions. The affected areas, mostly in rural India, depend on government water tank trucks to deliver a maximum of 20 to 25 liters of water per person per day—enough for COVID-19 handwashing, but only if the villagers use water for nothing else.

Last week, as India shut down, borders closed, all inter-state transport was paused, and I sheltered in my home in Delhi, I called to check in on some people elsewhere in India whom I’d met in earlier travels. One of them was Mangal Singh; another was Amar Habib, who leads a local farmer’s movement in the western state of Maharashtra, one of the first hit by the pandemic.

Thousands of villages in Marathwada, the part of the state where Habib lives and works, have also been affected by drought. Often, Habib said, the government trucks don’t even show up in the villages. The idea that people there would wash hands 10 times a day for 20 seconds struck him as absurd.

“Rural India doesn’t have enough water to keep washing their hands throughout the day,” Habib said.

By comparison, the village of Parwana, in the eastern state of Bihar, is fortunate: Piped water was introduced a month ago. But the water is only available three times a day for an hour or two. Each family ends up with anywhere from 40 to 120 liters of water per day.

“It depends on how much water one can store,” said Neeraj Singh, a village resident. Singh’s four-member family—smaller and better off than most of its neighbors—has two 20-liter buckets they use to store 40 liters of water (a little over 10 gallons). Larger families with smaller storage capacities will “store as much as they can in household utensils, sometimes even glasses and bowls,” he said.

In Bundelkhand, Mangal Singh returned home to Kaithi to find that his father, a local farmer, hadn’t changed his habits much. He certainly hadn’t taken up serial handwashing.

“I wash once thoroughly—from my feet to my forehead—when I return from the fields,” the older man told me.

Kesar Singh, convener of the Bundelkhand Water Forum, a local nonprofit, said many people in the region don’t even have shared taps. Women in such villages often travel more than a mile and stand in a long queue to fetch water. They’re obliged to prioritize cooking, drinking, and watering the livestock over handwashing.

Caste politics, which are especially strict in Bundelkhand, compound the problem: Upper-caste people control most of the water, Kesar Singh explained. Every village has a small colony at one end for lower caste Dalits, and these colonies typically have next to no sanitation facilities. In Kaithi’s colony, there is one tap for 400 people.

“To expect that people in this poverty-stricken, water-deficient region will prioritize handwashing over daily living is nothing short of a cruel joke,” Kesar Singh said. “If the only way to safeguard against this virus is water, then here’s the stark truth—Bundelkhand doesn’t have it.”

In part no doubt because water is scarce, rural Indians have a laid-back attitude toward handwashing. Some 70 percent of them, according to government surveys, wash hands without soap before a meal, while more than 30 percent do so after defecation—which often takes place in the open air. Sand, ash, or mud sometimes stand in for soap.

This lack of hand hygiene makes rural communities vulnerable to various communicable diseases. In India, almost 21 percent of communicable diseases, including cholera, dysentery, hepatitis A, and typhoid, are water-borne, and could be prevented in part with better handwashing—as could respiratory diseases such as flu and COVID-19.

Worldwide, an estimated 297,000 children under 5 die every year from diarrhea linked to inadequate drinking water, sanitation, and hygiene (WASH) facilities. In India, it’s the single biggest cause of infant and child mortality. Studies have shown handwashing can reduce the risk of diarrhea by as much as 43 percent.

And now a study released on March 24 by researchers at the University of Birmingham in the U.K. has documented a correlation between the size of a country’s COVID-19 outbreak and the weakness of its handwashing culture, as measured by the percentage of the population who told pollsters they don’t automatically wash their hands after using the toilet. At 40 percent, India has the 10th weakest culture among the 63 countries surveyed. China, where the pandemic began, has the weakest score of all (77 percent).

Americans score better (23 percent) but are still suffering by far the largest outbreak of COVID-19, because other factors influence the spread of the disease. Still, the correlation between handwashing and spread of the disease is strong, said Ganna Pogrebna of the University of Birmingham. It’s worrisome not only for India but for other places where the pandemic is still in its early stages, like sub-Saharan Africa.

“The fact that handwashing culture is weaker in some of the developing countries is a big concern,” Pogrebna said. “The main issue is that it is caused not just by human psychology or habit, but also by objective factors, like water shortages.”

A report released last year by the WHO and UNICEF found that as of 2017, 3 billion people worldwide, or 40 percent of the global population, lacked basic facilities at home to wash their hands with soap and water. More than 670 million people were still defecating in the open, and another 700 million were using unimproved, unsanitary facilities.

Yusuf Kabir, a WASH specialist with UNICEF in Maharashtra, said the panic over COVID-19 presents “a unique opportunity” to convince rural communities, especially in India, to improve their hygiene.

“It is possible to maintain a good handwashing routine with limited water,” Kabir said. UNICEF is working with the Indian government to install handwashing stations in rural markets, schools, and health centers.

The great fear among experts here is that when summer arrives, India might see a return of the severe droughts and water shortages that plagued much of the country last year—but this time while it’s battling a pandemic. In response to the 2019 crisis, Prime Minister Modi promised to provide piped water to every rural household, at the rate of 55 liters of water per person per day, by 2024.

The great hope, if the COVID-19 emergency can be said to offer hope, is that it will spur the Indian government to deliver on that promise—and also spur Indians themselves to change their behavior as much as possible, in a way that will bring them lasting benefits after the pandemic passes.

“It is probably the only silver lining of the disease,” said V.K. Madhavan, CEO of WaterAid, India. “It will make hand hygiene potentially a part of one’s behavior. The change and awareness about it now, as compared to a few weeks back, is phenomenal.”