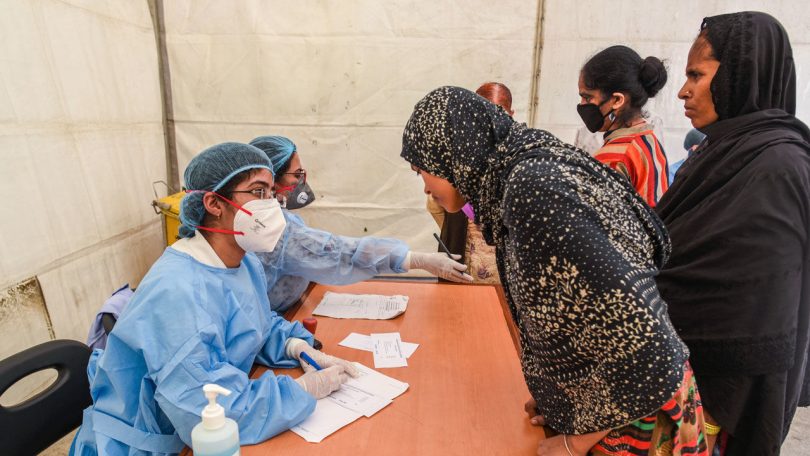 When malaria researcher Nicholas White saw coronavirus infections picking up around the world 2 months ago, he immediately thought of the impact they could have on poorer countries. “In fragile health care systems, if you start knocking out a few nurses and doctors, the whole thing can collapse,” says White, who is based at Mahidol University in Bangkok. “So we realized that the priority would be to protect them.”

White and his colleagues at the Mahidol Oxford Tropical Medicine Research Unit wondered whether widely available drugs could help. They have designed a trial in which 40,000 doctors and nurses in Asia, Africa, and Europe will prophylactically receive chloroquine or hydroxychloroquine, two old drugs against malaria. White hopes the trial will start this month, but its launch has been “incredibly difficult because of bureaucratic processes,” he says.

The international study is one of several in preparation or underway that seek to use drugs for what is called pre-exposure prophylaxis (PrEP), a strategy already widely used against HIV. The Bill & Melinda Gates Foundation is funding plans for another huge study that will test the same two drugs in Africa, North America, and Europe. Separate studies of the same drugs are planned or underway in the United States, Australia, Canada, Spain, and Mexico. Researchers are also considering other potential preventives, including nitazoxanide, a drug used to treat parasitic infections, and the antibody-laden serum from people who have recovered from an infection.

“If there was a drug that could prevent infections and that health care workers could take, that would be an enormous public health benefit,” says Jeremy Farrar, head of the Wellcome Trust, which is funding White’s effort.

PrEP studies of the malaria drugs could also be the best way to settle the heated debate—inflamed by U.S. President Donald Trump’s advocacy—over whether they are a promising treatment for COVID-19, says virologist Matthew Frieman of the University of Maryland School of Medicine. The weak and equivocal studies so far were mainly done in seriously ill patients. “To show an effect you really have to treat early,” Frieman says. “I don’t know any drug that works better late in infection.” Giving a drug before exposure is as early as it gets.

White adds that chloroquine and hydroxychloroquine are good choices to test because they are widely available—a major consideration given the huge number of people who might be eligible for any drug that proves its worth. “The attraction of these drugs is that they are potentially readily deployable and we know an awful lot about them.”

In White’s proposed trial, health care workers in Asia will be randomized to take chloroquine or a placebo for 3 months, while hydroxychloroquine will be used in Africa and Europe. Participants have to take their temperature twice a day and report it, along with any symptoms, through an app or a website. The researchers will compare the number of symptomatic and asymptomatic infections in both groups, as well as the severity and duration of illness in those who become infected.

Meanwhile, a trial of a related approach called postexposure prophylaxis (PEP) started in Barcelona, Spain, in mid-March. The idea behind that study, born before Spain’s COVID-19 epidemic exploded, is that a short course of a drug might prevent disease or lessen its impact in health care workers, nursing home residents, and household contacts of COVID-19 patients who have already been exposed to the virus. “We said, we need something stronger than nonpharmacological interventions like isolation and quarantine,” says Oriol Mitjà of the Germans Trias I Pujol University Hospital, who leads the study.

In the Spanish trial, people with symptoms who test positive for COVID-19 are treated with the HIV combination drug darunavir/cobicistat plus hydroxychloroquine. Anyone known to have spent more than 15 minutes with them in the previous 5 days is treated with hydroxychloroquine for 7 days. Patients in a control group and their contacts receive no drug—there was no time to prepare an appropriate placebo, Mitjà says.

The researchers plan to compare how many new symptomatic infections occur in the two groups after 14 days. More than 1000 contacts have been included already; the first result from that subset should be available around 15 April, Mitjà says. Similar studies are underway in Minnesota, Washington, and New York.

Experience with HIV has shown that PrEP and PEP can work to reduce infections. But before large-scale studies in HIV began, scientists had an “amazing amount of data” from a monkey model and epidemiology studies suggesting the strategies would work, says Steven Deeks, an HIV researcher at the University of California, San Francisco (UCSF). “I’m not sure any of that applies to what’s happening now.”

Potential side effects of chloroquine and hydroxychloroquine, including heart arrhythmia, are another concern. “The risks that might be acceptable in someone with disease may be much less acceptable when you are treating someone who doesn’t have it,” says Annie Luetkemeyer, an infectious disease physician at UCSF. “And you’re very unlikely to be monitoring them in the same way.”

Some countries aren’t waiting for the new trials. India, for instance, has already recommended hydroxychloroquine for health care workers caring for suspected or confirmed COVID-19 cases as well as patients’ household contacts; Bangladesh has a similar policy. (White says he had to exclude both countries from the international study as a result.) There is no basis for recommending wide use of the drug, many scientists say. “The idea that it is better than nothing is not true,” White says. “It could be worse than nothing.”

That’s not just because of the potential side effects. People who think they are protected may also become less cautious and run a greater risk of infection. And broad use of the drugs will make them harder to obtain for other conditions. In addition to curing malaria, chloroquine and hydroxychloroquine are mainstays for patients with lupus and rheumatoid arthritis, Luetkemeyer says. “We better be really sure that these drugs are working before we start impacting that drug supply.”

Because the demand could be so big, there has been some debate among researchers about which dose to test. White has decided to go with the highest possible dose, to maximize the chance of getting a positive result. But the Gates-funded study plan calls for evaluating medium and low doses as well. If one of those shows an effect, more patients could benefit if supplies are low.

Even if chloroquine works, it is unlikely to confer 100% protection—and a low level of protection may not make the risk of side effects worthwhile. “If you were a health care worker and I said, ‘Here’s a medicine which you have to take every day and it reduces your risk of getting COVID-19 by 20%,’ would you take it?” White asks. Below that, people probably wouldn’t bother, he says.

White hopes to start the international trial on 22 April in the United Kingdom, but he is still navigating the “myriad rules, regulations, and sequential hurdles that govern the conduct of clinical trials.” No one is acting with ill intent, he adds, but he thinks the emergency warrants faster action. “Is it really ethical to take 3 weeks to review an application for a medicine that has been available for 70 years?”