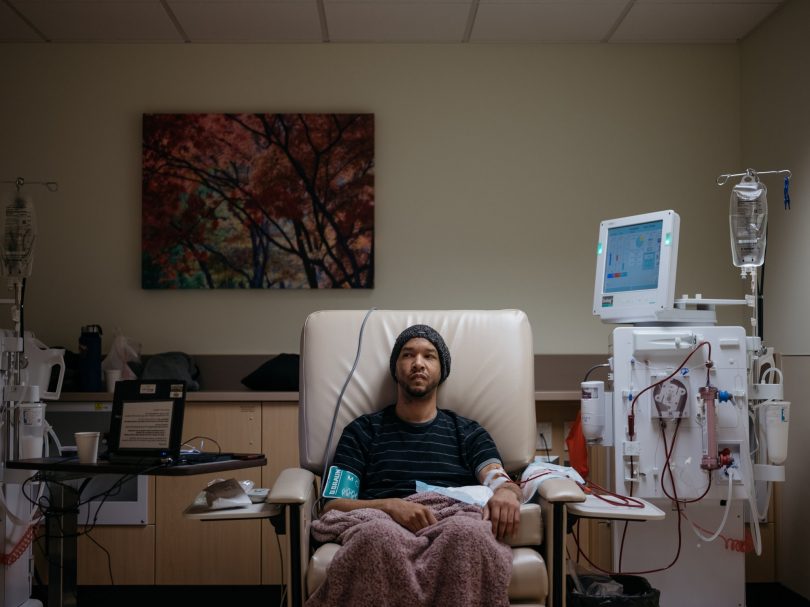 As the pandemic sweeps the United States, patients needing kidney dialysis and employees of the clinics worry about keeping the virus at bay in such tight spaces.

Mat Risher leaves the safety of his home near Seattle three days a week for dialysis at a clinic, a treatment he cannot live without but one that now most likely increases his risk of exposure to the coronavirus.

About 20 patients sit in a small space with him, tethered for several hours to machines that filter toxins from their blood. All now have their temperatures taken before they enter. They can wear a surgical mask and are told that the rooms are cleaned and machinery disinfected regularly.

One of the first people to die from the virus in the United States had received dialysis at the very same clinic, information that triggered a panic attack in Mr. Risher.

As the coronavirus rages from state to state, the 500,000 people whose failing kidneys require them to get dialysis are among the most vulnerable. Each clinic may have dozens of patients during a single shift, often sitting less than the recommended six feet apart for hours.

Kidney dialysis is a last resort for many people, and they are endemically susceptible to infection in normal times. The dialysis industry has historically had a poor record when it comes to infection control so the current infectious climate is fraught with worry.

DaVita and Fresenius, the two for-profit companies that dominate the industry, say they have procedures in place to keep their patients and staff safe and say they have taken aggressive steps in recent weeks to prevent the spread of the virus at their facilities. “We’re all playing in real time, and we’re doing our best,” said Javier Rodriguez, the chief executive of DaVita.

DaVita and Fresenius claim they have had no significant outbreaks to date. Fresenius says less than half of 1 percent of its patients and staff have tested positive for the virus. “We’ve been remarkably successful in mitigating cross-contamination,” said Bill Valle, the chief executive of Fresenius Medical Care North America, which is a unit of the German company.

“None of the services we provide are elective in nature,” he said.

DaVita would not say how many of its patients or staff have become infected. “At this time,” the company said, “we are not disclosing specific numbers for a variety of reasons, ranging from our desire to focus on both the mental and physical health of our patients and teammates, to the fact that things change frequently in this dynamic situation.” Critics of the large chains say the companies are not taking the threat seriously enough. Health care workers are concerned about protective equipment, with patients being asked to reuse masks and scattered shortages of the most protective gear for the nurses and technicians dealing with infected patients.

“When it comes to responding to Covid-19, the response by large dialysis organizations has been inadequate, leaving some of the most vulnerable exposed to Covid-19, which is especially serious in people with end-stage renal disease,” said Dave Regan, president of the Service Employees International Union-United Healthcare Workers West, in a statement.

Representative Katie Porter, Democrat of California, also wrote both companies in late March to ask what steps they were taking. “We are concerned that DaVita, specifically, has failed thus far to understand the severity of this outbreak and the high transmission of the virus,” she said.

In particular, she criticized DaVita for going ahead with an annual meeting of medical directors in early March, where one of the attendees later tested positive for the virus. In its response to Ms. Porter, DaVita defended the decision as being appropriate at the time and said no one appears to have been sickened as a result.

Infection has traditionally been one of the industry’s biggest problems.

“The second leading cause of death among hemodialysis patients is infections,” said Dr. Alan Kliger, a Yale nephrologist who is leading efforts to control the spread of coronavirus among dialysis patients. As many as one in 10 patients die from complications from an infection, often at the site where a patient has a catheter.

According to an analysis of Medicare data by the research department of the union, six out of 10 facilities undergoing routine inspections last year were cited for deficiencies involving infection control. Examples would include a staff member failing to wear gloves during a procedure or to properly clean equipment.

At this juncture, with the highly infectious coronavirus, others are extremely concerned about the spread of the virus through inadequate supplies of special masks or gowns. “We don’t have enough of many of those protective equipments,” Dr. Kliger said.

In areas like New York and Connecticut, the surge in patients has meant heavy use of whatever supplies are available, he said. “The burn rate has been incredibly high,” he said.

Dialysis workers say they do not feel protected. One worker who asked not to be named because she might lose her job said she thought the clinic was downplaying the risk of employees getting sick. “You just don’t feel fine,” she said.

The industry is now scrambling to adopt new practices aimed at stemming potential infections. At the clinic where Mr. Risher gets treated, “We saw things change pretty immediately,” he said.

Northwest Kidney Centers, the Seattle nonprofit network operating the clinic, worked with local health officials and the federal Centers for Disease Control and Prevention and tracked patients and staff who were in contact with the patient who became ill and died. The facility was disinfected, and employees were instructed how to wear protective gear when treating anyone with Covid-19. Northwest says 1 percent of patients tested so far have been positive.

“It is tough to be on the forefront of an evolving pandemic,” said Elizabeth McNamara, the chief nursing officer of Northwest.

Dr. Suzanne Watnick, the chief medical officer for Northwest, added: “We’re also providing comfort to our medical staff. They are experiencing the same fear and anxiety.” 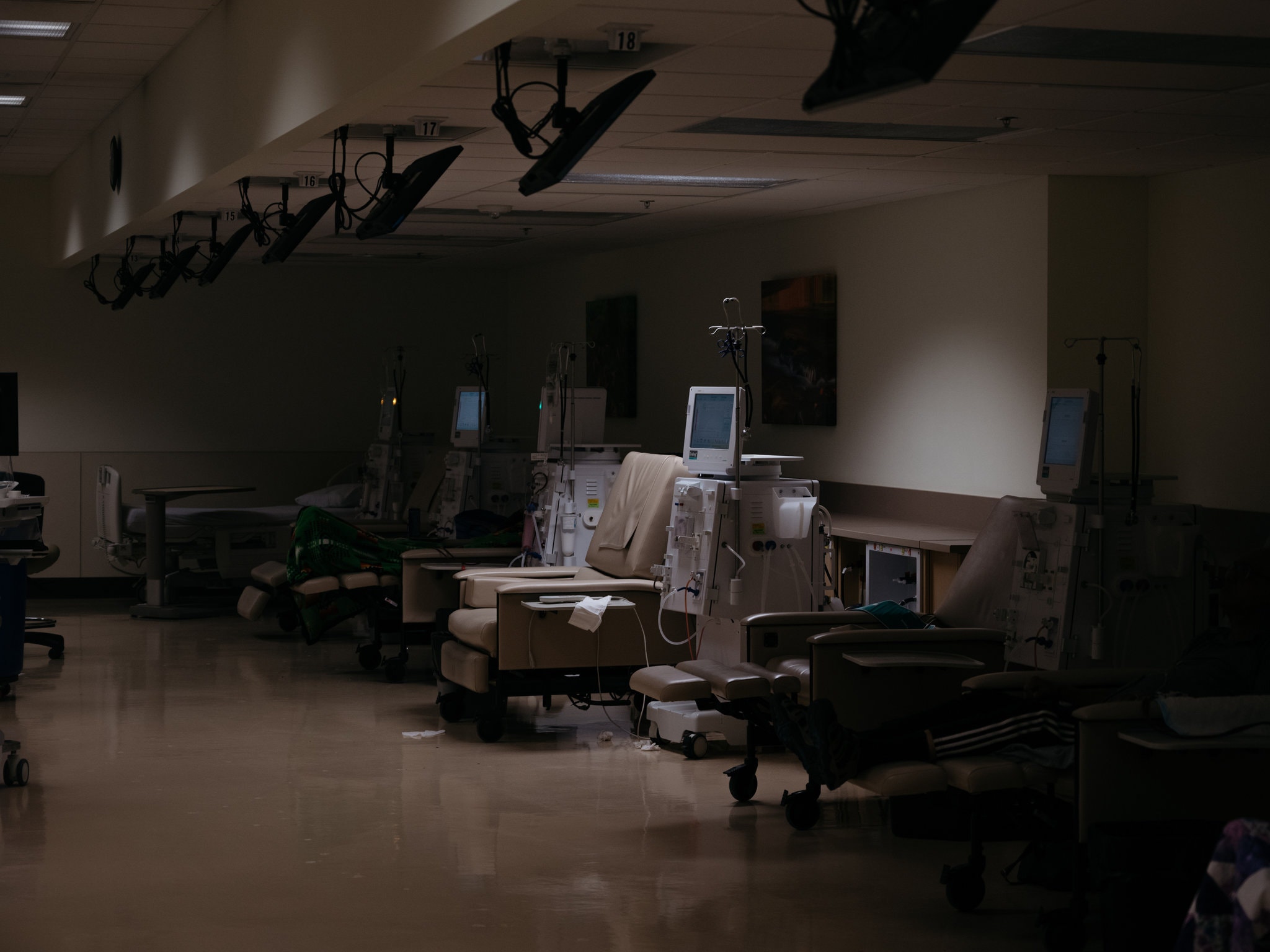 DaVita and Fresenius have put in place similar measures in recent weeks to try to prevent infections. No one gets into a clinic without a fever check and a discussion about potential coronavirus symptoms. Their patients and employees are now required to wear masks.

The companies have also decided to separate patients either suspected or confirmed to have the virus, putting them either in different clinics or scheduling their treatments on other shifts. The companies have taken the unprecedented step of agreeing to shift patients between their respective sites, if necessary, so infected or potentially infected patients are not spreading the virus.

Both companies acknowledge concerns over shortages of supplies but say they continue to have enough. Every patient is handed a new mask for each visit, the companies say, and workers have adequate protective equipment.

But some workers are questioning whether the clinics are making sure as few people as possible are there. Social workers and dietitians are being asked to come to work when they do not provide direct patient care, and some are being enlisted to help screen patients or wipe off machines, tasks that are outside their usual duties and could put them at risk. “We could easily call our patients from home and provide support,” one worker said.

The dialysis clinics say they consider these workers essential to take care of their patients, many of whom are struggling during the crisis to get food or travel to the clinics. “You need a lot of hands,” said Mr. Rodriguez of DaVita.

Workers also complain that the clinics are slow to inform them about whether any of their colleagues have developed the virus. Fresenius says it discloses information about infections at its facilities, and DaVita says it shares information when appropriate.

Kisha Cox, a 45-year-old in Portland, Ore., said she was not particularly anxious about going to the DaVita clinic where she received dialysis. She says she is following the clinic’s new protocols about wearing masks and its advice about being careful to wash her hands.

But she says the epidemic is definitely creating a strain on both workers and patients. “I think it’s overwhelming for a lot of them,” she said. “I can tell on the staff and patients’ faces, they are overwhelmed.”