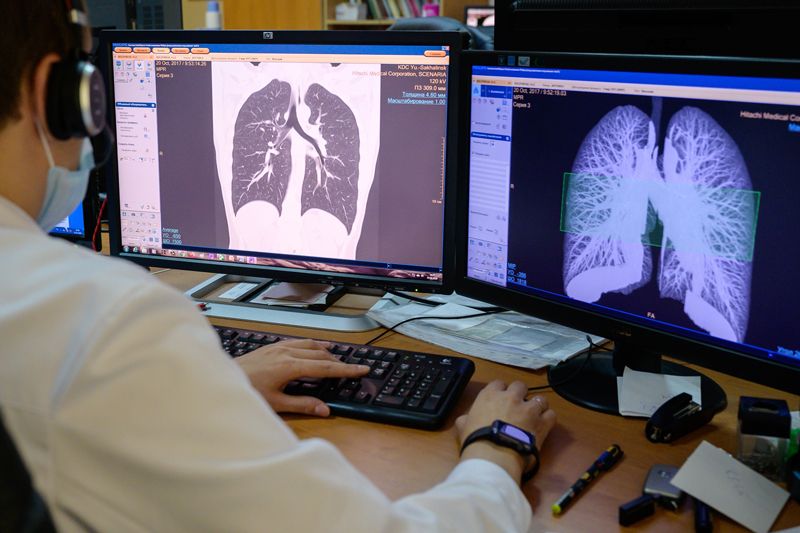 Doctors are reaching for drugs that dampen the immune response — but these also undermine the body’s own fight against the coronavirus.

How does COVID-19 kill? Uncertainty over whether it is the virus itself — or the response by a person’s immune system — that ultimately overwhelms a patient’s organs, is making it difficult for doctors to determine the best way to treat patients who are critically ill with the coronavirus.

Clinical data suggest that the immune system plays a part in the decline and death of people infected with the new coronavirus, and this has spurred a push for treatments such as steroids that rein in that immune response. But some of these treatments act broadly to suppress the immune system, stoking fears that they could actually hamper the body’s ability to keep the viral infection in check.

“My greatest fear is that this gets taken to an extreme, where people are using whatever they can get their hands on to turn off the immune response,” says Daniel Chen, an immunologist and chief medical officer at IGM Biosciences in Mountain View, California. “You can’t knock down the immune system at a time when it’s battling an infection.”

As coronavirus patients flood hospitals worldwide, physicians are wading through streams of incomplete data and preprints that have not been peer-reviewed, struggling to find ways to help their patients and sharing experiences on social media. Some doctors are trying cocktails of unproven therapies in a desperate bid to save lives.

“People are watching patients deteriorate before their eyes, and there’s a very strong motivation to reach for any therapy that you think could be effective,” says Kenneth Baillie, an intensive-care anaesthetist at the University of Edinburgh, UK. “When I feel powerless at the end of a bed, I feel the same.”

Some of the earliest analyses of coronavirus patients in China suggested that it might not be only the virus that ravages the lungs and kills; rather, an overactive immune response might also make people severely ill or cause death. Some people who were critically ill with COVID-19 had high blood levels of proteins called cytokines, some of which can ramp up immune responses. These include a small but potent signalling protein called interleukin-6 (IL-6). IL-6 is a call-to-arms for some components of the immune system, including cells called macrophages. Macrophages fuel inflammation and can damage normal lung cells as well. The release of those cytokines, known as a cytokine storm, can also occur with other viruses, such as HIV.

The ideal counter, then, would be a drug that blocks IL-6 activity and reduces the flow of macrophages into the lungs. Such drugs, known as IL-6 inhibitors, already exist for the treatment of rheumatoid arthritis and other disorders. One called Actemra (tocilizumab), made by the Swiss pharmaceutical firm Roche, has been approved in China to treat coronavirus patients, and researchers around the world are working furiously to test it and other drugs of this type.

But globally there is not enough of the drug to go round, and many clinicians are turning to steroids, which more broadly dampen the immune system, says James Gulley, an immuno-oncologist at the National Cancer Institute in Bethesda, Maryland. IL-6 inhibitors may suppress only those immune responses that are governed by IL-6, allowing other immune responses that might help the body fight COVID-19 to continue. But steroids and some other therapies that act more generally might significantly reduce the body’s ability to fight infection overall. These drugs will not only suppress macrophages, but also immune cells called CD4 T cells, which are crucial for initiating immune responses, and also CD8 T cells, which are the body’s antiviral assassins, capable of destroying infected cells with more precision than macrophages. “When things get really bad, they’ll throw on steroids,” says Gulley. “I am a bit worried about where some people are going.”

Chen notes that although IL-6 levels are high in some acutely ill patients, viral loads are high as well, suggesting that the body is still fighting off an active viral infection. “You have to assume that there’s an ongoing antiviral immune response that is important to these patients,” he says. If so, then reducing CD4 and CD8 T cells could undermine that response.

Steroids and other immune suppressants are already being tested against coronavirus in clinical trials. In March, UK researchers launched the RECOVERY study, a randomized clinical trial that will evaluate the steroid dexamethasone and other potential treatments for COVID-19. This worries rheumatologist Jessica Manson at University College Hospital in London. Evidence from previous outbreaks caused by related coronaviruses suggests that steroids hold little benefit, and might even delay the time it takes for patients to rid themselves of the virus, she says. And the RECOVERY trial calls for giving the treatments before patients become critically ill and have no other recourse.

But Peter Horby, who studies infectious diseases at Oxford University in the UK and leader of the RECOVERY trial, notes that the trial will be using relatively low doses of steroid. “Higher doses are not routinely recommended, but the jury is out on lower doses,” he says. “And many authorities, including the World Health Organization, recommend a trial.”

A combination of damage from both a virus and the immune response to it is not uncommon, says Rafi Ahmed, a viral immunologist at Emory University in Atlanta, Georgia. The effects of ‘hit-and-run’ viruses such as norovirus, which make people sick almost immediately after infection, are more probably due to the virus itself, he says. By contrast, people infected with viruses such as coronavirus do not show symptoms until several days after infection. By then, collateral damage from the immune response often contributes to the illness.

“It’s very hard to dissect what per cent of it is due to the virus itself, and what per cent is the immune response,” Ahmed says. “But it’s almost always a combination of the two.”

In the absence of an answer, Ahmed is hopeful that researchers will arrive at a combination therapy, such as an IL-6 inhibitor that does not completely suppress the immune system, combined with an antiviral drug that directly targets the virus. Other drugs that target the immune system are also being tested, including one called anakinra, which targets a signalling protein called IL-1, and may provide a way to reduce specific immune responses without hampering CD4 and CD8 T cells, says Chen.

But Baillie says that given the widespread use of steroids to treat people with coronavirus already, it is important to collect data on the practice. And although he is also concerned about suppressing immune responses in coronavirus patients, he notes that it is still possible that the practice could hold some benefit. “The only responsible thing to do is to use them in the context of a randomized clinical trial,” he says. “There’s no other way to know if a treatment is working.”