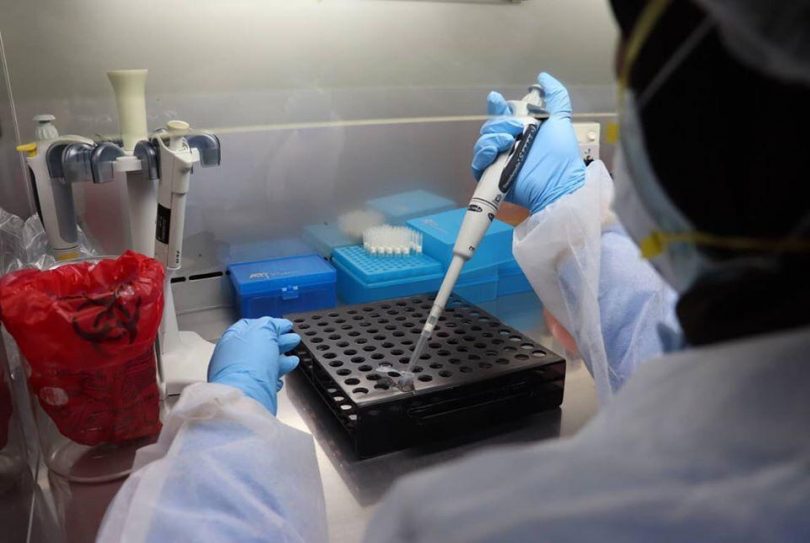 Considering the history and science behind making these drugs, “a year to 18 months would be absolutely unprecedented,” one expert warns.

PENN PRESBYTERIAN MEDICAL Center is waiting for the wave. The staff at the Philadelphia hospital is anxiously bracing for the storm surge of coronavirus cases that has already swept over nearby New York and New Jersey, overwhelming those states’ health-care systems and stacking bodies in its wake.

“You go from thing to thing to thing, and at the end of the day you still have 20 things that you have to resolve because so much is happening,” says Judith O’Donnell, director of infection prevention and control at Penn Presbyterian.

Across the country, health-care providers like O’Donnell are facing these overwhelming conditions knowing it may be a long time until they can access a particularly useful weapon against this viral onslaught: a vaccine. Vaccines stop outbreaks before they run amok, as evidenced by more than two centuries of using the medical technology to successfully battle foes including measles and influenza. (See why vaccines are critical to keeping diseases at bay.)

Drug companies and universities are now racing to develop a COVID-19 vaccine, with at least 62 efforts currently underway, according to the World Health Organization. Experts are optimistic that a vaccine will prove successful, based on early evidence that coronavirus patients can produce antibodies, the proteins in blood that attack and neutralize viruses.

Much of the excitement has centered on Moderna Therapeutics, which had an early prospect ready for clinical trials just 42 days after the genetic sequence for the new coronavirus was released. But while public officials and news reports were quick to cite this as a record-breaking development, the biotechnology underlying this drug has existed for nearly 30 years, and it has never yielded a working vaccine for any human disease. (Requests for comment from Moderna Therapeutics have not been answered.)

If the past is any indicator, the world won’t have a coronavirus vaccine for more than a year, probably longer. The mumps vaccine—considered the fastest ever approved—took four years to go from collecting viral samples to licensing a drug in 1967. Clinical trials come with three phases, and the first stages of the current COVID-19 trials aren’t due for completion until this fall, spring 2021, or much later. And there are good reasons to allow time for safety checks. Some preliminary vaccines for the related coronavirus SARS, for instance, actually enhanced the disease in model experiments.

“A year to 18 months would be absolutely unprecedented,” says Peter Hotez, dean at Baylor University’s National School of Tropical Medicine. “Maybe with the new technology, maybe with throwing enough money on it, that’ll happen. But we have to be really careful about those time estimates.”

All vaccines work by convincing the body’s immune system to mount a response to a foreign invader, whether it’s a virus, bacterium, or parasite. Classic methods involve taking a whole virus, weakening or killing it, then injecting its remains into a person’s body. That’s how traditional vaccines were made for smallpox, measles, and the flu, says Ali Salem, a drug developer and professor at the University of Iowa’s College of Pharmacy.

This old-school technique relies on the immune system reacting to individual proteins made by the germ, typically ones that coat the virus’s surface and that will cause the body to churn out antibodies. Over time vaccine makers realized they didn’t need a whole virus but could substitute a single protein to generate a robust immune response. These protein-based vaccines are easier and cheaper to make and have become the most common variety used by health-care professionals, says Maria Elena Bottazzi, associate dean at Baylor University’s National School of Tropical Medicine.

One major hitch in developing a COVID-19 vaccine is that no medically proven predecessor exists for any type of human coronavirus. This despite the fact that the 2002 SARS and 2012 MERS outbreaks, both caused by viral cousins of the new coronavirus, were warning shots that claimed about 1,600 lives.

“We’ve now seen a coronavirus epidemic every decade in the 21st century. We knew it was a huge threat,” says Hotez, who co-directs the Texas Children’s Hospital Center for Vaccine Development with Bottazzi, where they make protein vaccines for neglected diseases and coronaviruses. But while those outbreaks alerted the world to the virulent potential of the coronavirus family, SARS fizzled out faster than a vaccine could make its way through clinical trials, and MERS created too few cases to generate sustained funding for developers.

While early prospects from companies such as Moderna stir excitement and hope for quick success, past candidates based on similar biotechnology have struggled to prove effective in humans. Drugs of this type deposit a virus’s basic genetic material—DNA or RNA—into human cells, where they then build the protein needed to trigger an immune response.

DNA and RNA vaccines have the advantage of being quicker to develop, once a vaccine maker has the published genome of a microbe. They’re also easier to tweak in ways that fine-tune a beneficial immune response. This tactic has worked consistently in animal models of disease, and a second such candidate for COVID-19 entered clinical trials on April 6, based on earlier positive results with MERS. But Bottazzi and Hotez say humans are different beasts, and they worry all the hype around DNA and RNA vaccines might breed false hope.

“If you look at all the attempts people have done for HIV vaccines using the DNA platform, they haven’t found the exact formula of how these DNA molecules should go into the right cells,” she says, citing years of repeated failures with those HIV vaccines. “It’s a little bit of dark science. That’s why they’re still experimental.”

Who gets the vaccine first?

While debate over the best way to develop a COVID-19 vaccine might seem academic, the result can determine how much it will cost to make the drug and, by extension, who can afford it. Bottazzi, Hotez, and Salem all say delivering DNA and RNA vaccines could cost substantially more than traditional varieties.

“We’re going to see lots of new technologies moving through clinical development, and I think that’s actually positive because we’ll learn a lot,” says Hotez, who along with Bottazzi has been pushing for a low-cost coronavirus vaccine for 10 years. “Our big worry is that the world’s poorest people don’t get ignored in the process.”

To keep that from happening, world leaders may need to come together and sign a global access agreement, says Seth Berkley, a medical epidemiologist and CEO of the GAVI Alliance, an international health partnership dedicated to expanding access to immunization. Such an agreement could help guarantee that vulnerable populations—the elderly, health-care workers, people in resource-poor epicenters—get first dibs at the vaccine. It would also allow whichever company or university that wins the race for a COVID-19 vaccine to swiftly transfer its biotechnology across borders.

For instance, the Ebola vaccine was developed in Canada, transferred to academic researchers and biotech companies in the U.S., and ultimately manufactured in Germany. Now, thanks to widespread vaccination, the world’s second largest Ebola outbreak may finally be over.

A global access agreement might also lead to creation of more than one COVID-19 vaccine, each effective but with different prices for different markets. Such a setup has happened in the past for pneumococcal and human papillomavirus (HPV) vaccines, Bottazzi says.

If a COVID-19 vaccine does emerge, one big open question is how long immunity might last.

“If you get it once and your immunity is lifelong, then that would be a great scenario for the world,” says O’Donnell of the Penn Presbyterian Medical Center. However, immunity to cold-causing coronaviruses typically lasts only a year or two, which suggests that people would need seasonal shots of any COVID-19 vaccine.

In the meantime, O’Donnell says, the most valuable thing everyone can do to help health-care workers is to follow public health recommendations: “Practice social distancing, stay home, wash your hands, stop touching your face. Take as many precautions as you can to prevent yourself from getting this infection.”