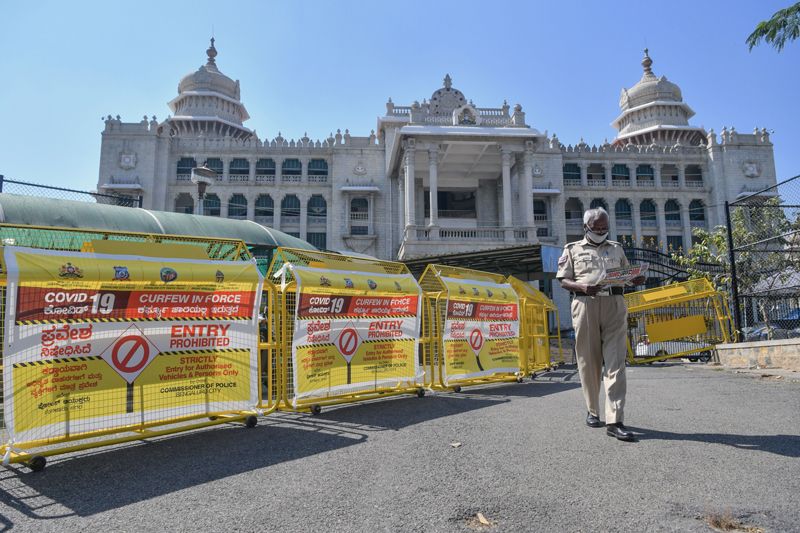 Without enough test kits, the 1.3-billion-person country is using a gigantic surveillance network to trace and quarantine infected people.

Like many nations, India does not have enough kits to test most of its population for the new coronavirus. The country is instead relying on people power: thousands of health-care workers are fanning out across the country to trace and quarantine people who might have had contact with those with COVID-19. People are typically only tested if they develop symptoms.

Countries such as South Korea isolated infected people based on widespread testing, but some scientists say that India’s mass-surveillance approach could achieve a similar goal, and be relevant for other low- and middle-income countries facing kit shortages.

“We know that there are countries that may not be able to test enough, but they should be operating under the assumption that there is community transmission happening and preparing the country to control or mitigate that spread, while testing is getting ramped up,” says Jonathan Epstein, vice-president for science and outreach at EcoHealth Alliance, a non-profit research organization in New York.

Testing still needs to be an essential part of India’s COVID-19 control strategy, and expanded rapidly, or infections will be missed, says Gagandeep Kang, executive director of the Translational Health Science and Technology Institute in Faridabad. Some people with the virus don’t have symptoms, so their infections won’t be detected unless they’re tested. “There is going to be no solution to this without testing,” says Kang. As of 9 April, the country had conducted a total of 144,910 tests — one of the lowest test rates per capita in the world. Some states have reported no tests at all.

Still, epidemiologists say that India’s strategy to trace and quarantine contacts, along with the government’s decision to order the country’s roughly 1.3 billion inhabitants to stay at home for 21 days from late March, have probably helped to slow the spread of the virus in some places, and bought the country time to prepare its ailing health-care system. Under the lockdown, people are allowed out for essentials, such as food and medical care, but in most states people under quarantine are closely monitored by social workers and cannot leave their homes in some places.

The stakes are high: if the current containment measures fail to slow viral spread, experts say, further restrictions to keep people apart will be needed. The government is considering extending the lockdown beyond its planned 14 April end. But such a move would be very hard on people who need to work to feed themselves.

India was well placed to send scores of public-health workers into villages, towns and cities to trace contacts and quarantine people in this outbreak. Its existing national surveillance network, called the Integrated Disease Surveillance Programme (IDSP), already monitors people across the country for communicable diseases, and has previously been used to track H1N1 influenza and measles.

The network started watching out for COVID-19 cases soon after the first case arrived in India in late January, and is now monitoring hundreds of thousands of people. In areas where workers identify clusters of disease, a containment zone is set up and everyone inside is ordered to stay at home. Social workers then go door to door to find people with suspected infections. If a person has symptoms, they are tested for the virus, along with members of their household and close contacts. People who test positive are taken to isolation units or hospitals.

Since monitoring efforts began, the network has helped identify more than 4,000 new cases, and put hundreds of thousands of people under surveillance across the nation.

The network is strongest in rural areas and urban slums, where people rely on government services, says Giridhara Babu, an epidemiologist at the Public Health Foundation of India in Bengaluru. The network’s gaps are in upper-class urban areas where people have an incentive to hide their illness, fearing they will be ostracized if they test positive, he says.

The network is also stronger in some regions than others. Some states, such as Kerala in the south, are obtaining phone records to investigate the contact histories of people with COVID-19 who are evasive, says Amar Fettle, an epidemiologist with the state’s IDSP in Thiruvananthapuram. In Chennai, a city of roughly 7 million people in the state of Tamil Nadu, health workers are going door to door daily to monitor and test anyone showing signs of an influenza-like illness.

Babu thinks it’s too early to say whether mass contact tracing across the country is working so far, especially in some states, but confirmed cases in India are low. The country currently has 6412 confirmed cases, which is significantly fewer cases compared to many other countries, especially given India’s huge population. These figures could be a result of low testing rates, he says.

For the current strategy to work, it needs to capture all infections — a Herculean task, says Ronojoy Adhikari, a mathematician at the University of Cambridge, UK. He has co-authored a preprint that estimates the virus’s spread in India with and without measures such as the lockdown1. His model, which has not been peer-reviewed, says that if even 100 infected people escape detection and re-enter the population after the lockdown, which is highly likely, cases will resurge quickly. “That’s really the crux of the matter here. How many people can we really effectively contact trace?” Adhikari says.

Srinivasan Venkatramanan, an infectious-disease modeller at the University of Virginia in Charlottesville, says more testing is needed to understand how long people must keep social-distancing measures in place, and to help the government to deploy health-care resources where they are needed.

If public-health workers do not trace all infected individuals during the lockdown, India will need to extend its period of stringent physical distancing, Adhikari says. Further lockdowns could help to keep infection levels low enough for the health-care system to handle until a vaccine is developed, his model shows. Even if the lockdown is not extended, the national government says states should restrict movement into and out of villages, towns and cities where there are high numbers of COVID-19 cases.

However, further lockdowns could have dire consequences. Strict social-distancing measures mean that people must stay at home, so many cannot work — particularly those on a daily wage. Developing nations do not have much financial flexibility to pay their inhabitants to stay at home for long, says Ricardo Hausmann, an economist at Harvard University in Cambridge, Massachusetts.

India has announced a 1.7 trillion rupees (US$22.6-billion) stimulus package for the poor, but economists have called it modest. India has to weigh the numbers of deaths that will be caused by the loss of livelihoods against those caused by the disease. “For those who have to stay at home, they starve to death,” Hausmann says.