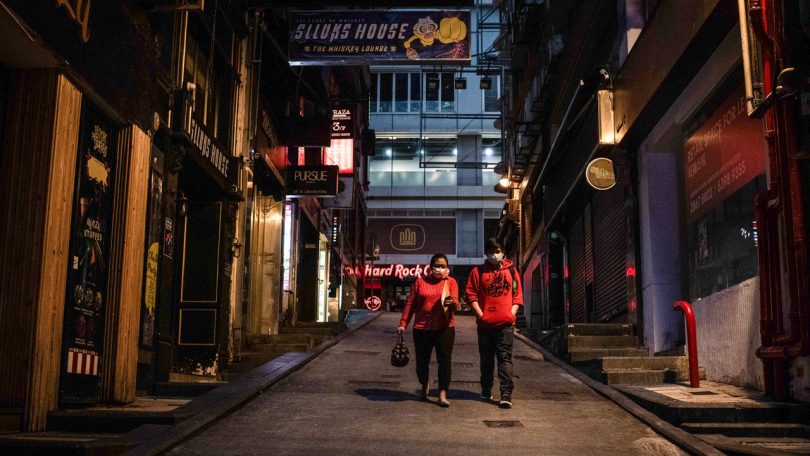 Despite setbacks, Hong Kong’s and Singapore’s targeted strategies for fighting COVID-19 may yet succeed—and provide a model for other countries emerging from their first wave of cases. Until recently, the two cities had managed to keep their case numbers remarkably low while avoiding the extreme lockdowns implemented in China and many other countries. Both fought outbreaks through aggressive testing, isolating infected people, and tracing and quarantining their contacts. For everyone else, it was almost business as usual, with a bit of social distancing.

But case numbers spiked in the second half of March, and some observers feared the strategy had failed. Hong Kong had just 149 confirmed cases on 15 March; the tally reached 1005 yesterday. Singapore’s number grew from 226 on 15 March to 2532 yesterday. Neither city is seeing the explosive growth Italy, Spain, and many areas of the United States have witnessed. Their health care systems have not been overwhelmed. But both ramped up their responses. Hong Kong recently imposed restrictions on restaurants and closed bars entirely. Singapore has closed schools and nonessential businesses and instructed residents to stay home—a dramatic escalation.

In Hong Kong, the rate of new cases has already slowed. University of Hong Kong public health specialist Gabriel Leung, who advises the city’s government, says if the trend continues, “we might be able to breathe a little bit easier” and relax the new regulations. He thinks what Hong Kong and Singapore are practicing may become the new normal in many countries: a “suppression and lift” strategy in which governments aim to alternately drive down new infections to a low level, then loosen the reins while watching for any resurgence.

When the pandemic first emerged, both Hong Kong and Singapore had certain advantages. After suffering major outbreaks of severe acute respiratory syndrome in 2003, they had built up response capabilities and laid preparedness plans. They are small and have few land borders, making it easier to control incoming travel. Each has a single government, avoiding the tensions between national and local authorities that plague the responses elsewhere. And, Leung says, “Both the Hong Kong and Singapore governments do care deeply [about scientific evidence] and listen to scientists.”

The two cities based their policies on detailed data about the state of their epidemics, gathered by extensive testing of contacts of confirmed cases and of people who enter hospitals with unexplained respiratory illnesses. Physicians can order tests for other patients based on their own clinical or epidemiological judgments. As a result, Singapore has done roughly 12,800 tests per million population; Hong Kong, 13,800, according to respective health authority statistics—some of the highest testing rates in the world.

Both cities hospitalize those who test positive, regardless of whether they have symptoms, to prevent them from infecting others. Close contacts of cases and all recent returnees must self-quarantine at home for 2 weeks. (Both cities have banned almost all noncitizens from entering.) In Hong Kong, quarantined people are fitted with electronic wristbands that work with smartphones to track their whereabouts. In Singapore, they must respond to mobile phone text messages that reveal their location several times a day. Violators face fines and jail terms.

Those very tight controls allowed both cities to impose relatively minor restrictions on the uninfected. Singapore defied conventional wisdom by keeping schools open; movie theaters and bars could stay open if they kept patrons separated by 1 meter. In Hong Kong, bars and restaurants remained open. (The city did close its schools, however, and civil servants were ordered to work from home, a move followed by many businesses.)

The rise in numbers in late March was a warning sign. “We try to project what might happen over the next couple weeks if we do not do anything,” Vernon Lee, an infectious disease epidemiologist at Singapore’s Ministry of Health, said during a 3 April Brookings Institution webinar. So, both cities ramped up countermeasures.

Since 28 March, restaurants in Hong Kong have been limited to 50% of normal capacity, with no more than four to a table, and they must check patrons’ temperatures at the door and provide hand sanitizer. Karaoke rooms and mahjong parlors were closed on 1 April, and bars on 3 April. (Each measure was to be in force for 14 days, but all have been extended until 23 April.) Singapore closed its schools on 8 April and barred eat-in dining. It has ordered all nonessential businesses to close or have employees work from home, and asked all residents to remain at home as much as possible. The city’s restrictions now resemble those adopted by New York and the United Kingdom.

Hong Kong seems to have already reversed the uptick in cases. The city reported just 13 new cases on 9 April, down from 65 on 27 March—and 10 of them were among returning Hong Kongers. Overall, travelers into the country account for 58% of all confirmed cases. For some cases, the infection sources remain unknown, and hidden community transmission could still be taking place, Chuang Shuk-kwan, head of communicable diseases at Hong Kong’s Centre for Health Protection, recently told the South China Morning Post. However, “We’re not experiencing a locally sustained outbreak yet,” Leung says.

A factor that epidemiologists call the effective reproductive number—the average number of new cases sparked by each infected individual—indicates whether a country is stanching an epidemic. In simple terms, the effective reproductive number is calculated by comparing the case count at any point in time with the case count later, after the delay from infection to the onset of symptoms, diagnosis, and reporting. Models then use recent trends in social distancing and other factors to estimate the number in real time. If the number is above one, an outbreak is accelerating; if it’s less than one, it is decreasing. Hong Kong’s effective reproductive number was hovering about one in late March but has been trending downward since, according to an online COVID-19 dashboard maintained by the Centre for Health Protection. “It’s reassuring, at least for now,” Leung says, and it might lead the city to loosen the rules in the future.

Singapore, too, expects to go back and forth between different levels of restrictions, Lee said during the webinar, which might be the most sustainable strategy in the long run. Minimally intrusive policies, such as encouraging personal hygiene and telecommuting, are relatively easy to keep up, he noted, but it’s harder to limit the size of gatherings, cancel entertainment, and close schools and businesses for very long.

Experts in both cities believe setbacks are inevitable, as Singapore just learned. It reported 287 new cases on Thursday, its highest ever 1-day total. (Friday’s tally was 198; Saturday’s was 191.) Clusters of infections in dormitories for foreign construction workers accounted for the majority of cases. New cases in the wider community seem stable, Singapore officials told local media. As Lee put it, “This is not a sprint over the next month, it’s a marathon that we do not know how long will last.”