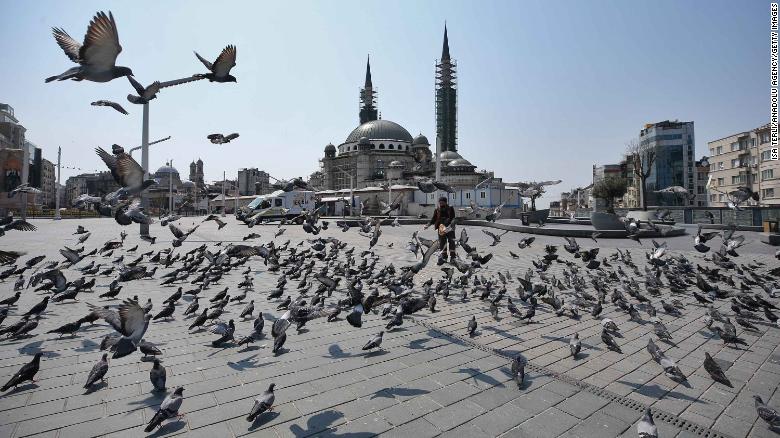 Taksim Square’s flocks of resident pigeons, normally waddling around with full bellies thanks to cups of grains that children toss at them, swoop unhindered straight at the heads of the few passers-by, mostly policemen and media. 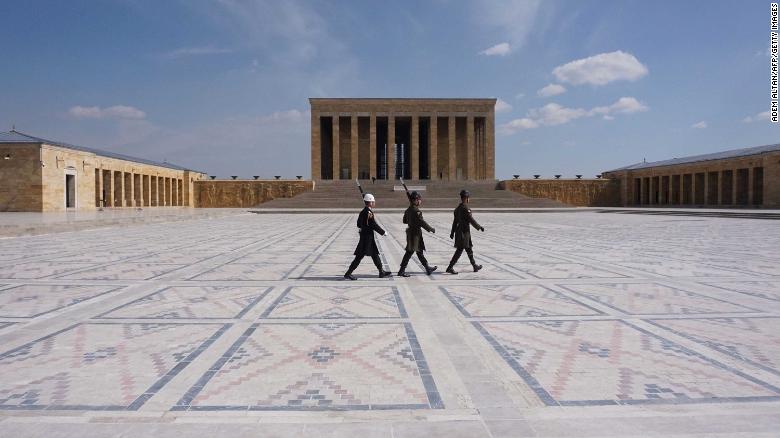 Others produce face shields and gallons and gallons of disinfectants, hand sanitizers, and other essential cleaning products. Masks are obligatory in public places like markets, but are not sold anywhere anymore.
That was banned because the government is distributing them free at pharmacies, or for those who can’t go out, straight to their homes.
Turkey is easing the burden of the epidemic on those under stay at home orders by sending volunteers and police door to door to make sure vulnerable people have the services they need.
Call centers called “Acik Kapi” — Open Door — area located in every district where those elderly citizens under stay-at-home orders can call in requesting anything from a grocery delivery, pharmacy purchase or their monthly retirement cash.
Eyup is one of Istanbul’s populous historic districts, where the phone rings nonstop.
Serdar Karakus, a school headmaster’s assistant, and Ugur Uyan, a neighborhood mosque imam, have been authorized to withdraw people’s retirement funds and deliver them to citizens who request their service.
They are both volunteers who say they do this as their duty to their country and their people.
“My parents are elderly. I live in Istanbul. They live in Manatya. They are receiving this service where they are because I am not there to help them,” Karakus said. “But someone there is. So to do this for the elderly here, it’s like I am doing it for my own parents.”
A few hours later we join a group of policemen who are doing the rounds handing out face masks and Kolonya, a traditional Turkish version of hand sanitizer made up of 80 percent alcohol, usually scented with lemon fragrance.
Sadet Seker, in her 70s, lives alone. Her husband passed away years ago. She speaks to her children regularly on the phone.
But the last time she hugged them — the last time she had physical contact with them — was two or three months ago. She’s not sure. We ask if they are in Istanbul.
“Yes, they are in Istanbul,” she replies and then starts to shake, her eyes filling with tears.
They are so close, and yet they might as well be so far away. How soon she can actually see them will depend on whether or not Turkey’s Covid-19 strategy is a successful gamble.
Source: https://edition.cnn.com/2020/04/17/europe/turkey-coronavirus-lockdown-response-intl/index.html