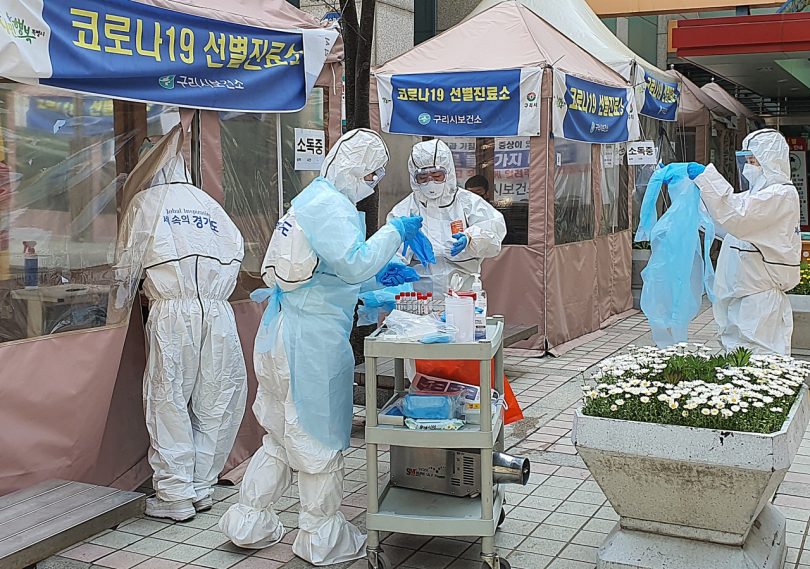 A total of 163 patients previously declared cured of COVID-19 have tested positive again in South Korea as of Friday, up 22 from a day earlier, giving the government a fresh headache in its fight against the virus.

The recurring cases account for 2.1 percent of the 7,829 people released from quarantine after recovering. Studies are underway to find out why, according to the Korea Centers for Disease Control and Prevention.

It took 13.5 days on average for these patients to test positive again after being deemed clear of COVID-19 — as little as one day and as long as 35.

Currently, to be declared recovered and released from quarantine one needs two negative results from tests conducted at 24-hour intervals.

An epidemiological and clinical analysis of 137 recurring cases showed that more than half of them, 72 people, had no symptoms and 61 people showed mild symptoms, according to the KCDC. Analysis is underway for the other four.

Those who test positive again after release from quarantine are usually detected through regular testing required by some municipalities or when they show symptoms and seek testing themselves.

Health officials here have cautiously dismissed the possibility of patients being reinfected with the virus.

The virus, despite being present at undetectable levels in patients’ bodies, could have been reactivated due to their weakened immune systems, or the tests could have picked up “dead” remnants of the virus, the officials said. There is also the possibility that the test results were in error.

To find out whether those who test positive again can infect others, the health authorities ran an antibody analysis of 28 recurring cases. In six of the cases, the virus could not be cultivated, meaning those people were less contagious. Analysis is underway for the other 22 cases.

“We could not find the virus that was alive (in recovered patients who tested positive again), so we think it will not be highly infectious,” KCDC Director General Jeong Eun-kyeong said at a briefing Friday.

While 22 recovered patients were back in self-quarantine after testing positive again on Friday, Korea saw 22 new infections. The total number of COVID-19 cases here stands at 10,635.

The number of recurring cases has more than tripled from 51 on April 6, keeping the authorities on their toes despite the country largely having brought the virus situation under control, with fewer than 30 new cases per day for the past week.

Recurring positive test results were reported in all age groups, though people in their 20s accounted for the highest proportion, 23.3 percent. This appears to be partially because this age group accounts for the largest portion of the country’s total cases, 27.35 percent.

By gender, 66.9 percent of the recurring cases involved women. Of the country’s total cases, 59.7 percent are women.

By region, Daegu, once Korea’s epicenter of the novel coronavirus, reported the most cases with 67, making up 41.1 percent of all recurring cases. Daegu represents the majority of the country’s total cases, accounting for 64.2 percent.

Some 33 percent of the cases were registered in North Gyeongsang Province, 8 percent in Gyeonggi Province and 5 percent in Seoul.