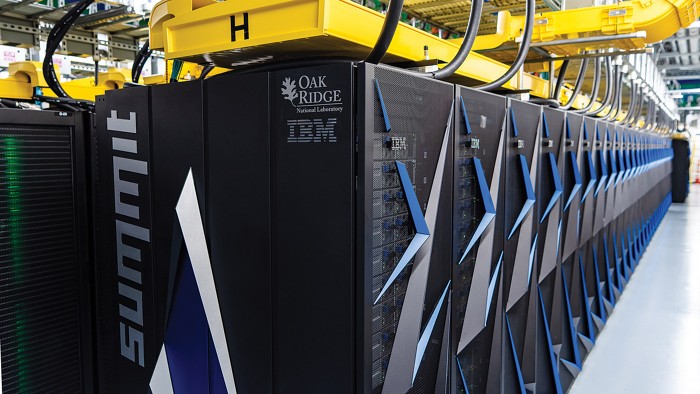 National labs, universities, and companies around the world are fast-tracking proposals to use their high-performance computer resources against the novel coronavirus

It took scientists only a few days in January to deduce the genome of the novel coronavirus, SARS-CoV-2, giving researchers around the world blueprints to the virus’s molecular tools and machinery. But for computational chemists and biophysicists, the hard work is just beginning. They have spent the past 2 months using those blueprints to build computer models of the virus’s proteins. These models could help them figure out how the proteins interact with human cells and could help them find therapies to prevent infections or treat COVID-19, the disease caused by the virus. The scientists are now beginning to deploy these carefully crafted models.

Accurately modeling the thousands of atoms in proteins like the polymerase that SARS-CoV-2 uses to replicate its RNA can require significant computing power. The need for computing power increases further when scientists want to simulate interactions between proteins or between proteins and molecules, and it increases even more when researchers want to accomplish these tasks quickly. And right now, the world needs answers about SARS-CoV-2 urgently.

That’s why universities, national labs, and companies that own some of the world’s most powerful computers are making their resources available to researchers fighting COVID-19. In the US, an ad hoc COVID-19 High Performance Computing (HPC) Consortium has formed and is accepting proposals to use a range of computer systems, including two of the world’s most powerful supercomputers, as well as Google’s and Amazon’s cloud-computing services. The Partnership for Advanced Computing in Europe (PRACE) has also opened a fast-track call for proposals to use the computing systems it represents. Chinese national supercomputing centers are offering COVID-19 researchers free computing time, as are tech companies Alibaba Group and Tencent. And these are just a few of the many efforts worldwide to give scientists special access to high-performance computing power in a time of need.

Tjerk Straatsma, a computational chemist at Oak Ridge National Laboratory, is one of the people reviewing proposals for the US consortium, whose more than two dozen members include IBM, the Massachusetts Institute of Technology, and NASA. The COVID-19 HPC Consortium’s members are donating computer time and consulting services from their staff. Straatsma says the group came together out of a realization that high-performance computing can be a big help in finding “therapeutic technology or testing technology, or just the kind of information you need in order to make informed decisions about policies.” Oak Ridge is drawing funding from its director’s discretionary programs, which account for about 10% of the lab’s computational budget, to contribute to the consortium, Straatsma says.

Five or six people review each COVID-19 HPC Consortium proposal, and Straatsma says it takes him a couple of hours to review the three to six proposals he’s assigned daily. Most proposals are reviewed almost as soon as they’re submitted, with more than 30 people currently on the review committee. A separate committee allocates the consortium’s resources to approved projects. The whole process can be completed within a week.

“We want to provide resources very quickly to teams that have ideas that could help mitigate this problem in a fairly short time frame,” Straatsma says. He says the consortium is looking for focused proposals with clear scientific goals, a defined schedule, and a request for the type of resources needed, like a distributed cloud system or a single supercomputer. While many of the proposals are coming from groups with experience using these kinds of high-performance computing systems, the consortium will also match less-experienced groups with experts who can help researchers make the most of their projects.

One project already approved is led by Andrés Cisneros of the University of North Texas. He’s a computational chemist who studies enzymes that interact with DNA and RNA. With collaborators in the US and France, Cisneros plans to study several protein inhibitors that could act against SARS-CoV-2’s polymerase and its main protease, which produces proteins the virus needs for replicating. Cisneros says he started thinking about a COVID-19 project after seeing a tweet about the structure of the virus’s RNA polymerase. “After a week chatting with my group, I told them I’m sick and tired of sitting around,” he says. He told the group he thought they should instead contribute.

Cisneros and several volunteers from his laboratory submitted a proposal to the COVID-19 HPC Consortium on March 25, and 4 days later, they received time on several supercomputers, including Oak Ridge’s Summit, which is currently the world’s most powerful. That power, and the way the computer’s processors are organized, will allow the team to simulate protein interactions involving hundreds of thousands of atoms three or four times as quickly as would be possible using their university systems, Cisneros estimates.

One of Cisneros’s collaborators in France, Jean-Philip Piquemal of Sorbonne University, is working on a separate project on the Joliot-Curie Rome supercomputer through the PRACE consortium. Unlike the US-based COVID-19 HPC Consortium, PRACE existed before the COVID-19 pandemic to handle high-performance computing proposals for a consortium of institutions. But like the US effort, PRACE has created a fast-track proposal system for the current crisis. The association is looking for similar proposals to the US consortium’s: brief and focused, with a project that’s ready to be launched. PRACE has set up a special committee to review proposals, and it has approved 5 out of about 30 submitted so far, with the goal of making approvals within a week.

PRACE normally accepts proposals twice a year for science and engineering projects from a broad range of industries to use computing systems at five European institutions, including the Barcelona Supercomputing Center and the Gauss Centre for Supercomputing, in Germany. “We felt the need to support science in fighting the disease,” says Serge Bogaerts, PRACE’s managing director. He says they’re looking for “scientists who could make efficient use of these systems in projects fighting COVID-19,” including biomolecular research, bioengineering, and epidemiology.

One member of the PRACE committee overseeing the special call for proposals, theoretical chemist Núria López of the Institute of Chemical Research of Catalonia, says researchers experienced with using high-performance computing resources have been the first to apply, but PRACE would be “very happy getting proposals from other disciplines.” Bogaerts says PRACE is considering ways to provide additional support to groups that may have less experience with these systems or redirect them to other, more appropriate computing resources.

Even though the partnership is accustomed to reviewing proposals and allocating resources, the fast-track call has introduced some new challenges in addition to a quicker pace. PRACE has stipulated that its approved COVID-19 projects make their data freely available in order to enable solutions to a global problem. But now the association is trying to figure out how to give scientists the right infrastructure to handle and share the data their research is generating. PRACE is also trying to make more scientists aware of the call for proposals. López says in these early days—the call for proposals opened March 19—the partnership has gotten more interest from countries like Italy and Spain that have been hard hit by the virus than from other countries.

Both Straatsma and PRACE’s representatives say that these special COVID-19 efforts shouldn’t disrupt existing research projects scheduled to use their members’ computing systems. They describe having enough flexibility in schedules and resource allocation to make room for COVID-19 research without interfering with other work.

While these initiatives in the US and Europe involve large collaborations, efforts in China and elsewhere have so far come mostly from individual organizations. Two of China’s largest technology companies, Tencent and Alibaba, are giving researchers access to their high-performance cloud-computing systems. Alibaba Cloud is available for free to researchers around the world at public institutions working to treat or prevent COVID-19, including those using protein screening or gene sequencing. The company’s experts will review applications, and a spokesperson says they are making decisions in 4–7 days.

Tencent has given free cloud-computing time so far to two researchers: Hai-Bin Luo of Sun Yat-sen University, who is investigating a method to find drugs that could treat COVID-19 in patients with severe cases; and Niu Huang of the Tsinghua Institute of Multidisciplinary Biomedical Research and the National Institute of Biological Sciences, who is carrying out gene-sequencing calculations.

For his research, Luo has also used four of China’s National Supercomputing Centers, which are offering free time for COVID-19 research.

These are far from the only high-performance computing resources that are being made available to fight the current pandemic. Australia’s National Computational Infrastructure and the Pawsey Supercomputing Centre as well as Singapore’s National Supercomputing Centre made proposal calls similar to the ones in the US and Europe—although Singapore’s is open only to local researchers. South Africa’s Centre for High Performance Computing is asking interested researchers to reach out directly. And Canadian quantum computing company D-Wave Systems is offering free access to its cloud service. On a different scale, organizations like Folding@home, which lets people donate computing power for protein-folding simulations, and Foldit, which turns protein folding into a game anyone can play, have also joined the computing effort.

The COVID-19 HPC Consortium’s Straatsma says he’s happy to be helping, even if reviewing proposals means some extra work. “There is a sense of urgency,” he says. “At this point, we need something. Let’s do whatever we can to help.”