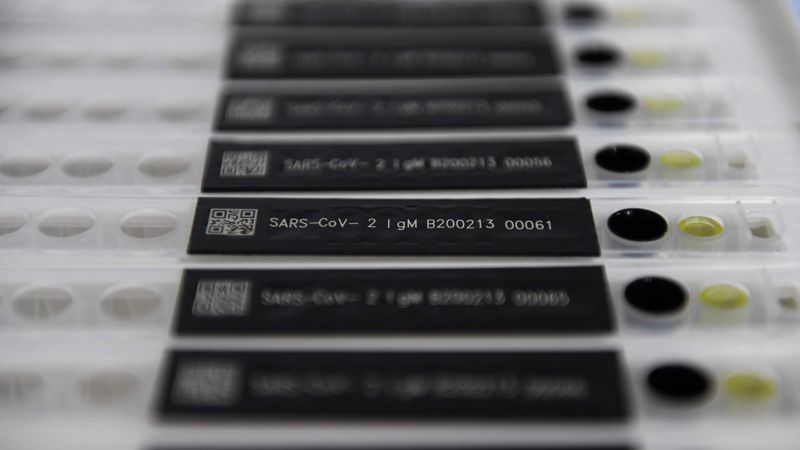 Touted as society’s way out of widespread lockdowns, scientists say the true potential of these rapidly developed tests is still unknown.

British Prime Minister Boris Johnson called them a ‘game changer’. Antibody tests have captured the world’s attention for their potential to help life return to normal by revealing who has been exposed, and might now be immune, to the new coronavirus.

Dozens of biotech companies and research laboratories have rushed to produce the blood tests. And governments around the world have bought millions of kits, in the hope that they could guide decisions on when to relax social-distancing measures and get people back to work. Some have even suggested that the tests could be used as an ‘immunity passport’, giving the owner clearance to interact with others again.

Many scientists share this enthusiasm. The immediate goal is a test that can tell healthcare and other essential workers whether they are still at risk of infection, says David Smith, a clinical virologist at the University of Western Australia in Perth. In the future, they could also assess whether vaccine candidates give people immunity.

But as with most new technologies, there are signs that the promises of COVID-19 antibody tests have been oversold, and their challenges underestimated. Kits have flooded the market, but most aren’t accurate enough to confirm whether an individual has been exposed to the virus.

And even if tests are reliable, they can’t indicate whether someone is immune to reinfection, say scientists. It will be a while before kits are as useful as hoped, says Smith. “Countries are still gathering the evidence.”

The UK government learnt about this the hard way after it ordered 3.5 million tests from several companies in late March, only to later discover that none of these tests performed well enough.

“No test is better than a bad test,” says Michael Busch, director of the Vitalant Research Institute in San Francisco.

Antibody tests are also being used by researchers globally to estimate the extent of coronavirus infections at a population level, which is extremely valuable given that many places aren’t doing enough standard testing, and people with mild or no symptoms will probably be missed in official case counts. These surveys test a portion of the population and use that to estimate infections among the broader community. More than a dozen groups worldwide are doing such studies.

When a virus invades the body, the immune system produces antibodies to fight it. Kits detect the presence of antibodies using components from the virus, known as antigens. Tests generally fall into one of two categories: lab tests that need to be processed by trained technicians and take about a day, and point-of-care tests that give rapid, on-the-spot results within 15 minutes to half an hour. Several companies, including Premier Biotech in the United States and China-based Autobio Diagnostics, offer point-of-care kits, which are designed to be used by health professionals to check if an individual has had the virus — but some companies market them for people to use at home.

The tests don’t detect the virus itself, so have limited use in diagnosing active infections, say health agencies. But in some countries, such as the United States and Australia, tests are being used in some cases to diagnose people who have suspected COVID-19, but who test negative on a standard PCR test, says Smith. (A study1 by researchers at Shenzhen Third People’s Hospital in China found that PCR tests did not always diagnose patients infected with the virus.)

Because of the ongoing emergency, the US Food and Drug Administration (FDA) has relaxed the rules that govern the use of such tests. It has authorized their use in laboratories and by health-care workers to diagnose active COVID-19 infection, with the disclaimer that they have not been reviewed by the FDA and that results should not be used as the sole basis for confirming that someone has the disease. Australia has also introduced similar emergency authorizations.

These measures are appropriate given the pandemic situation, says Smith. Antibody tests in people who might be actively infected can be an important part of managing patients at hospitals, and contact tracing, although the results need to be interpreted cautiously, he says.

One problem, however, is that most kits have not undergone rigorous testing to ensure they’re reliable, says Busch. During a meeting at the UK Parliament’s House of Commons Science and Technology Select Committee on 8 April, Kathy Hall, the director of the testing strategy for COVID-19, said that no country appeared to have a validated antibody test that can accurately determine whether an individual has had COVID-19.

It seems that many tests available now are not accurate enough at identifying people who have had the disease, a property called test sensitivity, and those who haven’t been infected, known as test specificity. A high-quality test should achieve 99% or more sensitivity and specificity, adds Collignon. That means that testing should turn up only about 1 false positive and 1 false negative for every 100 true positive and true negative results.

But some commercial antibody tests have recorded specificities as low as 40% early in the infection. In an analysis2 of 9 commercial tests available in Denmark, 3 lab-based tests had sensitivities ranging 67–93% and specificities of 93–100%. In the same study, five out of six point-of-care tests had sensitivities ranging 80–93%, and 80-100% specificity, but some kits were tested on fewer than 30 people. Testing was suspended for one kit. Overall, the sensitivity of all the tests improved over time, with the highest sensitivity recorded two weeks after symptoms first appeared. Some of these tests are also being used to test individuals in other countries, including Germany and Australia.

Point-of-care tests are even less reliable than tests being used in labs, adds Smith. This is because they use a smaller sample of blood — typically from a finger prick — and are conducted in a less controlled environment than a lab, which can affect their performance. They should be used with caution, he says. The WHO recommends that point-of-care tests only be used for research.

Without reliable tests, “we may end up doing more harm than good,” says Collignon.

One unknown that affects both kinds of test is the interplay between timing and accuracy. If a test is done too soon after a person is infected and the body hasn’t had time to develop the antibodies the test is designed to detect, it could miss an infection. But scientists don’t yet know enough about the timing of the body’s immune responses to SARS-CoV-2 to say exactly when specific antibodies develop.

By contrast, false positives crop up if a test uses an antigen that doesn’t only target antibodies produced to fight SARS-CoV-2, and instead picks up antibodies for another pathogen as well, says Smith. An analysis3 of EUROIMMUN’s antibody test found that although it detected SARS-CoV-2 antibodies in three people with COVID-19, it returned a positive result for two people with another coronavirus.

Ironing out all these issues takes time and involves trial and error, says Collignon. It took several years to develop antibody tests for HIV with more than 99% specificity, he says.

Another big question surrounding antibody tests is the extent to which being infected with a pathogen confers immunity to reinfection. To have protective immunity, the body needs to produce a certain type of antibody, called a neutralizing antibody, which prevents the virus from entering cells.

But it’s not clear whether all people who have had COVID-19 develop these antibodies. An unpublished analysis4 of 175 people in China who had recovered from COVID-19 and had mild symptoms reported that 10 individuals produced no detectable neutralizing antibodies — even though some had high levels of binding antibodies. These people had been infected, but it’s unclear whether they have protective immunity, says Wu Fan, a microbiologist at Fudan University in Shanghai, China, who led the study. “The situation for patients is very complicated,” says Fan.

So far, researchers say they have not seen any evidence that people can get reinfected with the virus. Rhesus macaques infected with SARS-CoV-2 could not be reinfected at just under one month following their initial infection, according to an unreviewed study5 by researchers at Peking Union Medical College in Beijing. “We should presume that once you have been infected, your chance of getting a second infection two to three months later is low,” says Collignon. But how long that protective immunity will last is not known.

Even if it becomes clear that most people do develop neutralizing antibodies, most tests currently don’t detect them. And tests that do are more complex to develop and not widely available.

The fact that most antibody tests can’t detect neutralizing antibodies is also relevant because some politicians are pushing the idea that these tests be used to clear those with past COVID-19 infections to interact with others again, a so-called immunity passport. Researchers are trying to determine whether the antibodies detected by current kits can act as a proxy for protective immunity, says Smith.

Another complicating factor for immunity passports is that antibody tests can’t rule out that a person is no longer infectious, says Smith. A study6 published in Nature this month found that viral RNA declines slowly after antibodies are detected in the blood. The presence of viral RNA could mean that the person is still shedding infectious virus.

Despite the challenges, once reliable antibody tests are available, they could be important to understanding which groups of people have been infected how to stop further spread, says Collignon. They could even be used to diagnose active infections when PCR tests fail, adds Smith.