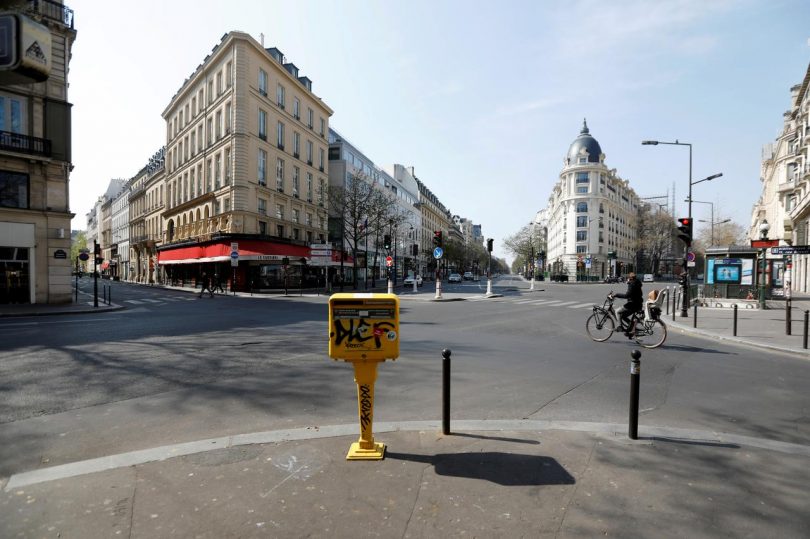 Global economic activity all but ground to a halt this month as government-imposed lockdowns due to the coronavirus pandemic took a particularly heavy toll on the world’s service industry, surveys showed on Thursday.

The outbreak, which has infected more than 2.6 million people and killed more than 180,000 globally, has also crippled manufacturing, shutting factories and upending supply chains.

Meanwhile, with restaurants, bars and other leisure options closed, holidays canceled and travel restricted, the situation in the services industry was dire.

To try and support economies reeling from the coronavirus pandemic, governments and central banks around the world have unleashed unprecedented amounts of fiscal and monetary support.

Asia’s economic woes, seen in flash purchasing managers’ indexes, were echoed in surveys from Europe. In the United States the surveys also showed massive contractions in the factory and services sectors there.

IHS Markit’s flash U.S. Composite Output Index, which tracks the manufacturing and services sectors, plunged to a reading of 27.4 this month. That was the lowest since the series began in late-2009 and followed a final reading of 40.9 in March. A reading below 50 indicates a contraction in private sector output.

The U.S. services sector flash Purchasing Managers Index dropped to an all-time low reading of 27.0 this month from 39.8 in March. Economists polled by Reuters had forecast a reading of 31.5 in April for the services sector, which accounts for roughly two-thirds of the U.S. economy. Factory activity fell to 36.9, the lowest since March 2009 and following a final reading of 48.5 in March.

In the euro zone, IHS Markit’s Flash Composite Purchasing Managers’ Index (PMI), seen as a good gauge of economic health, sank to 13.5, by far its lowest reading since the survey began in mid-1998 and considerably below all forecasts in a Reuters poll.

Even the most pessimistic contributor to the poll had predicted a reading of 18.0.

As countries began to shut down last month the index staged its biggest one-month fall on record in March, hurtling below the 50 mark that separates growth from contraction to 29.7.

“What does the survey really tell us that we don’t already know from looking out the window and seeing empty streets and closed shops? Not that much actually.”

IHS Markit said the PMI was consistent with the bloc’s economy contracting 7.5% this quarter. A Reuters poll published on Wednesday had a 9.6% contraction penciled in.

It was an even grimmer picture in Britain, where coronavirus hit the economy with more force than any forecaster had feared as businesses reported an historic collapse in demand during a nationwide lockdown.

Its PMI fell to a new record low of 12.9, and the scale of the collapse all but guarantees a huge contraction in the world’s fifth-largest economy. That will add to doubts about whether the financial help offered by the government is reaching businesses quickly enough.

Britain’s economy will contract 13.1% this quarter, a Reuters poll predicted earlier on Thursday, which would be the biggest quarterly drop since World War Two.

Stocks and other risky assets barely batted an eyelid on the PMIs, most of which is made up of backward-looking data, as caution set in ahead of a Eurogroup meeting to discuss joint stimulus measures. That caution also offset optimism over a fresh round of U.S. coronavirus aid and a rebound in oil prices.

“The rather muted reaction relative to the amplitude of the misses proves the lack of surprise for markets, which are almost immune to data at the moment,” said Olivier Konzeoue at Saxo Markets.

Japan’s services sector PMI shrank at a record pace in April, as retailers took a hit from government requests for citizens to stay home and shops to close or operate at shorter hours than usual.

The au Jibun Bank Flash Japan Services PMI plunged to 22.8, marking the lowest reading since the start of the services sector survey in September 2007. Its factory PMI fell to 43.7, its lowest since April 2009.

“For now, we assume that the index will improve in May, after two seriously low readings, but we are prepared to eat our words, particularly as the new orders and new export orders indices fell further below 50 in April,” said Miguel Chanco at Pantheon Macroeconomics.

The gloomy data comes ahead of the Bank of Japan’s policy meeting next week, at which the central bank is set to sharply cut its growth forecasts and take further steps to ease corporate funding strains.

It was similarly painful in Australia where the IHS Markit flash services PMI slumped to a record low 19.6. The flash manufacturing PMI fell to 45.6 in April from 49.7 in March.

The International Monetary Fund said last week Asia would post zero economic growth this year for the first time in 60 years as the health crisis takes an “unprecedented” toll on the region’s service sector.

Even China, which is starting up again much earlier than other countries, will see its economy recover only slowly from its first quarterly contraction since current records began, according to a Reuters poll.