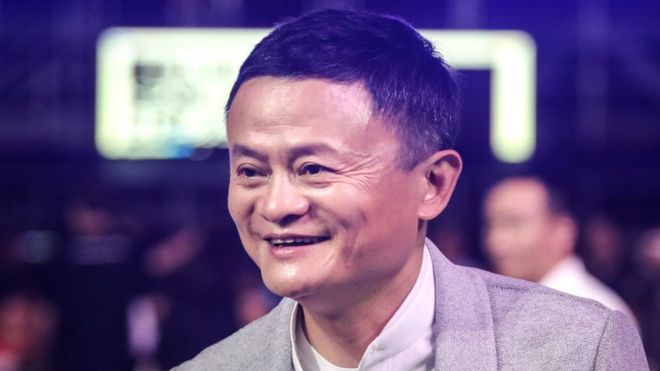 The richest man in China opened his own Twitter account last month, in the middle of the Covid-19 outbreak. So far, every one of his posts has been devoted to his unrivalled campaign to deliver medical supplies to almost every country around the world.

“One world, one fight!” Jack Ma enthused in one of his first messages. “Together, we can do this!” he cheered in another.

The billionaire entrepreneur is the driving force behind a widespread operation to ship medical supplies to more than 150 countries so far, sending face masks and ventilators to many places that have been elbowed out of the global brawl over life-saving equipment.

But Ma’s critics and even some of his supporters aren’t sure what he’s getting himself into. Has this bold venture into global philanthropy unveiled him as the friendly face of China’s Communist Party? Or is he an independent player who is being used by the Party for propaganda purposes? He appears to be following China’s diplomatic rules, particularly when choosing which countries should benefit from his donations, but his growing clout might put him in the crosshairs of the jealous leaders at the top of China’s political pyramid.

Other tech billionaires have pledged more money to fight the effects of the virus – Twitter’s Jack Dorsey is giving $1bn (£0.8bn) to the cause. Candid, a US-based philanthropy watchdog that tracks private charitable donations, puts Alibaba 12th on a list of private Covid-19 donors. But that list doesn’t include shipments of vital supplies, which some countries might consider to be more important than money at this stage in the global outbreak.

How Alibaba compares to the top five 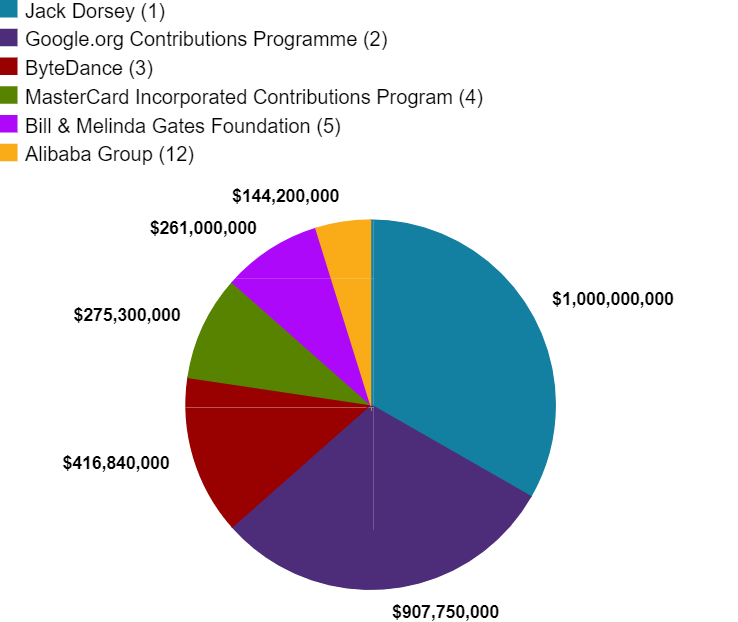 No one else other than the effervescent Ma is capable of dispatching supplies directly to those who need them. Starting in March, the Jack Ma foundation and the related Alibaba foundation began airlifting supplies to Africa, Asia, Europe, Latin America and even to politically sensitive areas including Iran, Israel, Russia and the US.

Ma has also donated millions to coronavirus vaccine research and a handbook of medical expertise from doctors in his native Zhejiang province has been translated from Chinese into 16 languages. But it’s the medical shipments that have been making headlines, setting Ma apart.

“He has the ability and the money and the lifting power to get a Chinese supply plane out of Hangzhou to land in Addis Ababa, or wherever it needs to go,” explains Ma’s biographer, Duncan Clark. “This is logistics; this is what his company, his people and his province are all about.”

Jack Ma is famous for being the charismatic English teacher who went on to create China’s biggest technology company. Alibaba is now known as the “Amazon of the East”. Ma started the company inside his tiny apartment in the Chinese coastal city of Hangzhou, in the centre of China’s factory belt, back in 1999. Alibaba has since grown to become one of the dominant players in the world’s second largest economy, with key stakes in China’s online, banking and entertainment worlds. Ma himself is worth more than $40bn.

Officially, he stepped down as Alibaba’s chairman in 2018. He said he was going to focus on philanthropy. But Ma retained a permanent seat on Alibaba’s board. Coupled with his wealth and fame, he remains one of the most powerful men in China.

It appears that Ma’s donations are following Party guidelines: there is no evidence that any of the Jack Ma and Alibaba Foundation donations have gone to countries that have formal ties with Taiwan, China’s neighbour and diplomatic rival. Ma announced on Twitter that he was donating to 22 countries in Latin America. States that side with Taiwan but who have also called for medical supplies – from Honduras to Haiti – are among the few dozen countries that do not appear to be on the list of 150 countries. The foundations repeatedly refused to provide a detailed list of countries that have received donations, explaining that “at this moment in time, we are not sharing this level of detail”.

However, the donations that have been delivered have certainly generated a lot of goodwill. With the exception of problematic deliveries to Cuba and Eritrea, all of the foundations’ shipments dispatched from China appear to have been gratefully received. That success is giving Ma even more positive attention than usual. China’s state media has been mentioning Ma almost as often as the country’s autocratic leader, Xi Jinping.

It’s an uncomfortable comparison. As Ma soaks up praise, Xi faces persistent questions about how he handled the early stages of the virus and where, exactly, the outbreak began.

The Chinese government has dispatched medical teams and donations of supplies to a large number of hard-hit countries, particularly in Europe and South-East Asia. However, those efforts have sometimes fallen flat. China’s been accused of sending faulty supplies to several countries. In some cases, the tests it sent were being misused but in others, low-quality supplies went unused and the donations backfired.

In contrast, Jack Ma’s shipments have only boosted his reputation.

“It’s fair to say that Ma’s donation was universally celebrated across Africa,” says Eric Olander, managing editor of the China Africa Project website and podcast. Ma pledged to visit all countries in Africa and has been a frequent visitor since his retirement.

“What happens to the materials once they land in a country is up to the host government, so any complaints about how Nigeria’s materials were distributed are indeed a domestic Nigerian issue,” Olander adds. “But with respect to the donation itself, the Rwandan leader, Paul Kagame, called it a “shot in the arm” and pretty much everyone saw it for what it was which was: delivering badly-needed materials to a region of the world that nobody else is either willing or capable of helping at that scale.”

But is Ma risking a backlash from Beijing? Xi Jinping isn’t known as someone who likes to share the spotlight and his government has certainly targeted famous faces before. In recent years, the country’s top actress, a celebrated news anchor and several other billionaire entrepreneurs have all “disappeared” for long periods. Some, including the news anchor, end up serving prison sentences. Others re-emerge from detention, chastened and pledging their allegiance to the Party.

“There’s a rumour that [Jack Ma] stepped down in 2018 from being the chairman of the Alibaba Group because he was seen as a homegrown entrepreneur whose popularity would eclipse that of the Communist Party,” explains Ashley Feng, research associate at the Centre for New American Security in Washington DC. Indeed, Ma surprised many when he suddenly announced his retirement in 2018. He has denied persistent rumours that Beijing forced him out of his position. 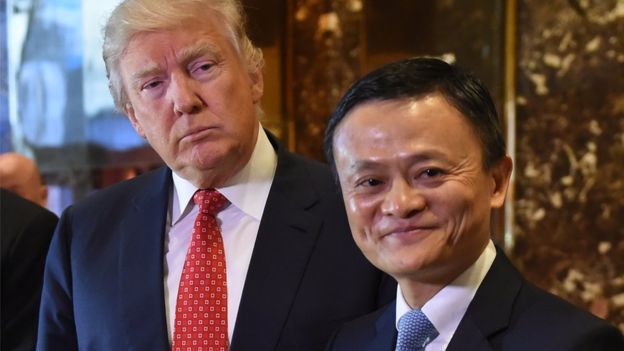 Duncan Clark, Ma’s biographer, is also aware of reports that Ma was nudged away from Alibaba following a key incident in January 2017. The Chinese billionaire met with then-President-elect Donald Trump in Trump Tower, ostensibly to discuss Sino-US trade. The Chinese president didn’t meet with Trump until months later.

“There was a lot of speculation of time that Jack Ma had moved too fast,” Clark says. “So, I think there’s lessons learned from both sides on the need to try to coordinate.”

“Jack Ma represents a sort of entrepreneurial soft power,” Clark adds. “That also creates challenges though, because the government is quite jealous or nervous of non-Party actors taking that kind of role.”

Technically, Ma isn’t a Communist outsider: China’s wealthiest capitalist has actually been a member of the Communist Party since the 1980s, when he was a university student.

But Ma’s always had a tricky relationship with the Party, famously saying that Alibaba’s attitude towards the Party was to “be in love with it but not to marry it”.

Even if Ma and the foundations connected to him are making decisions without Beijing’s advance blessing, the Chinese government has certainly done what it can to capitalise on Ma’s generosity. Chinese ambassadors are frequently on hand at airport ceremonies to receive the medical supplies shipped over by Ma, from Sierra Leone to Cambodia.

China has also used Ma’s largesse in its critiques of the United States. “The State Department said Taiwan is a true friend as it donated 2 million masks,” the Chinese Foreign Ministry tweeted in early April. “Wonder if @StateDept has any comment on Jack Ma’s donation of 1 million masks and 500k testing kits as well as Chinese companies’ and provinces’ assistance?”

Perhaps Ma can rise above what’s happened to so many others who ran afoul of the Party. China might just need a popular global Chinese figure so much that Ma has done what no one else can: make himself indispensable.

“Here’s the one key takeaway from all that happened with Jack Ma and Africa: he said he would do something and it got done,” explains Eric Olander. “That is an incredibly powerful optic in a place where foreigners often come, make big promises and often fail to deliver. So, the huge Covid-19 donation that he did fit within that pattern. He said he would do it and mere weeks later, those masks were in the hands of healthcare workers.” 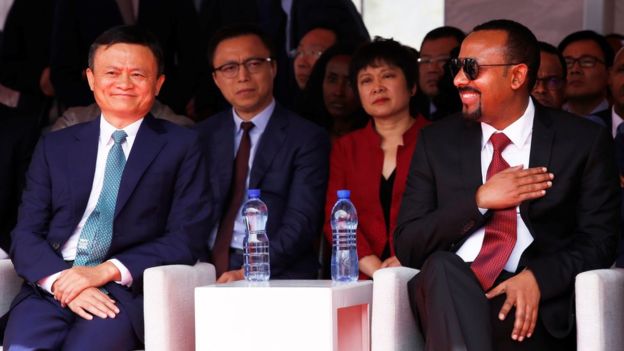 Duncan Clark argues that Ma already had a seat at China’s high table because of Alibaba’s economic heft. However, his first-name familiarity with world leaders makes him even more valuable to Beijing as China tries to repair its battered image.

“He has demonstrated the ability, with multiple IPOs under his belt, and multiple friendships overseas, to win friends and influence people. He’s the Dale Carnegie of China and that certainly, we’ve seen that that’s irritated some in the Chinese government but now it’s almost an all hands on deck situation,” Clark says.

There’s no doubt that China’s wider reputation is benefiting from the charitable work of Ma and other wealthy Chinese entrepreneurs. Andrew Grabois from Candid, the philanthropic watchdog that’s been measuring global donations in relation to Covid-19, says that the private donations coming from China are impossible to ignore.

“They’re taking a leadership role, the kind of thing that used to be done by the United States,” he says. “The most obvious past example is the response to Ebola, the Ebola outbreak in 2014. The US sent in doctors and everything to West Africa to help contain that virus before it left West Africa.”

Chinese donors are taking on that role with this virus.

“They are projecting soft power beyond their borders, going into areas, providing aid, monetary aid and expertise,” Grabois adds.

So, it’s not the right time for Beijing to stand in Jack Ma’s way.

“You know, this is a major crisis for the world right now,” Duncan Clark concludes. “But obviously, it’s also a crisis for China’s relationship with the rest of the world. So they need anybody who can help dampen down some of these those pressures.”