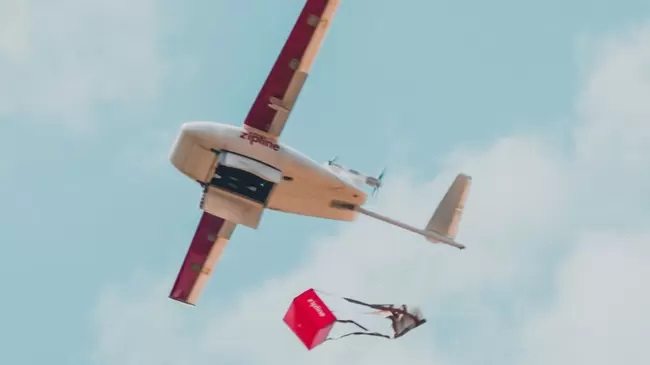 The small unmanned aircraft drop off the samples by parachute.

When one of these 6-foot-long drones takes off from a facility in Ghana, a rope catapults the little airplane off a ramp and into the sky. With that dynamic launch and its two 14-inch propellers spinning, it very quickly hits a speed of nearly 70 miles per hour.

It whirs along during cruise slightly slower, at some 60 mph, and when it gets to its drop zone, doors on its belly open up like a bomb bay, and it deploys a small box attached to a little parachute. Then it flies back home.

And just recently those boxes have contained something novel: saliva samples to test for the presence of the coronavirus. The specimens arrived via these drones at one of two labs in cities in Ghana (one in Accra, the other in Kumasi) for testing. A company called Zipline is operating them.

Regardless of their location, people who suspect they might have COVID-19 are understandably eager—or even desperate—to get tested, and especially in the US, that process has been painfully delayed. In Ghana (population: more than 29 million) the initial eight drone flights transported just 58 samples, and the country has had 1,154 confirmed cases, according to Johns Hopkins University. But regardless of where someone lives or what kind of access to healthcare they have, a test result can at the very least inform them as to whether they should stay home and self-quarantine or not. The data also provides more information for governments.

Here’s how the drones in Ghana—and the logistics of the overall system—work.

The word “drone” typically conjures thoughts of little quadcopters that can take off and land vertically. But if an aircraft maker wants their vehicle to be able to go far, they’d be wise to give the craft wings, which provide lift and increase efficiency. Drones can take many different shapes: a large, boxey flying machine from Bell is designed to transport cargo and haul 70-pound loads, while the Air Force and a company called Kratos have been experimenting with a fighter-jet-style drone.

In the case of Zipline, the electric craft looks like a small airplane and boasts an 11-foot wingspan. An onboard battery powers its propellers. That removable power unit does something else, too: It’s a means of storing data, like a black box. “In that battery are all the flight logs,” says Keenan Wyrobek, the head of engineering at Zipline. When the battery is charged after a flight, the data uploads to their system. It’s also a way for them to give the aircraft software updates: putting the battery back into the aircraft can transfer new software to it when it’s time.

After it launches off the catapult, the plane cruises on autopilot towards its destination. Not long after the vehicle has been flung fast into the air, one of its two props switches off, and it motors along using just one, Wyrobek explains; the second one can be fired up during flight in response to strong winds. Movable surfaces on both the wings and each side of its V-shaped tail allow it to do typical aircraft maneuvers, like turn or change altitude. Also in the plastic V-tail are two antennas—one in each side—for communications. 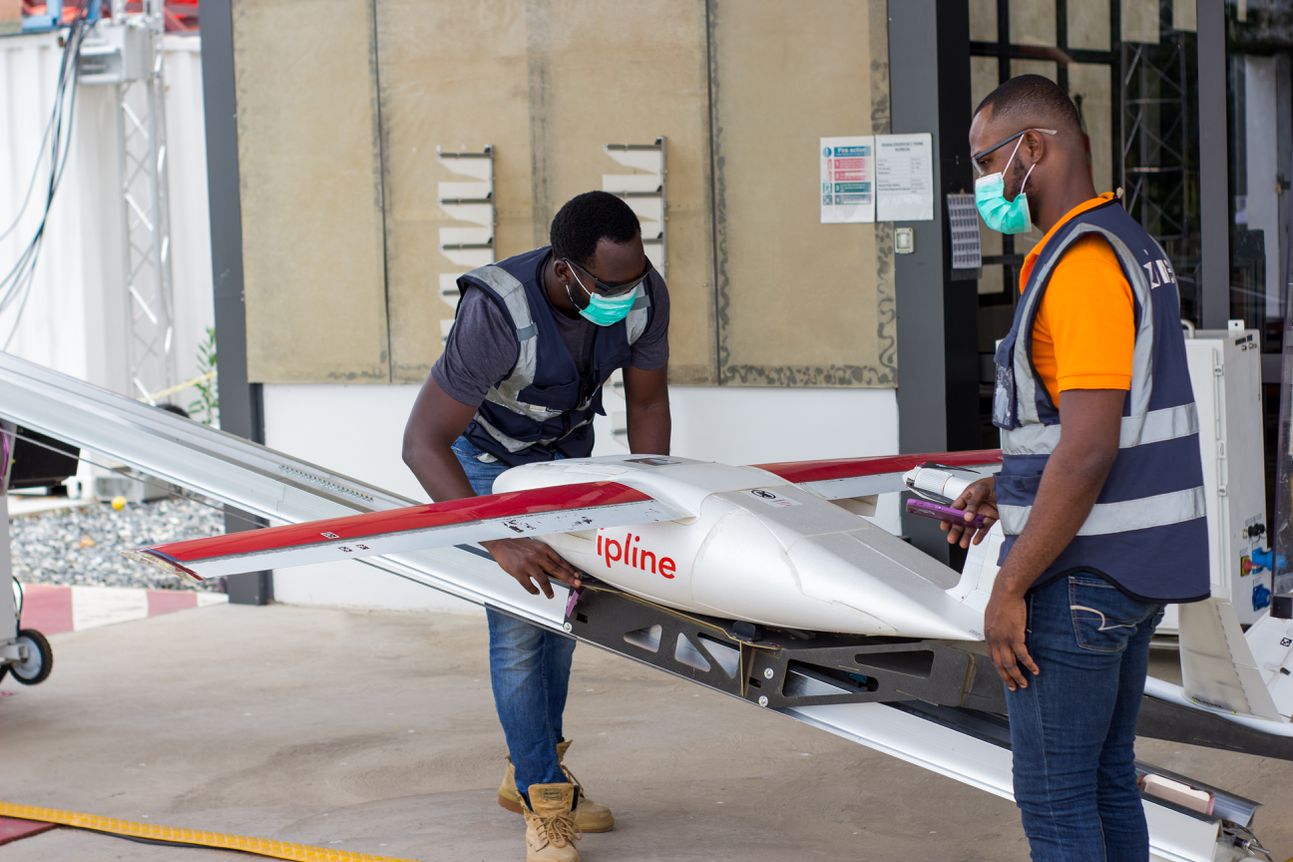 The launch system flings the drone into the air.

Eventually, the plane gets to the spot where it’s supposed to deposit its cargo. “In order to make sure that package ends up where the customer wants it, the plane has to do something kinda fancy,” Wyrobek says. “It’s live-estimating the wind speed and direction and magnitude, and compensating.” It’ll adjust its path as needed so the package then drifts in the wind to the correct location, ideally. The payload is just a wee 3.9 pounds, max.

A typical commercial passenger or cargo flight travels from point A to B, but these drones don’t. They return to their original base after they’ve dropped off their goods. And the way they land is something akin to a fighter jet touching down on an aircraft carrier: It flies right into a horizontal cable in the air, which a hook on the drone’s belly catches. The plane then swings down. That system is also automated, says Wyrobek, with the drone and the recovery apparatus communicating with each other. “If we catch it, great,” Wyrobek adds. “If not, the drone—the Zip—automatically flies back around and tries again.” That way, they don’t need to worry about any hard landings, a rough touchdown on a traditional runway that can stress the landing gear or other aspects of the airframe. 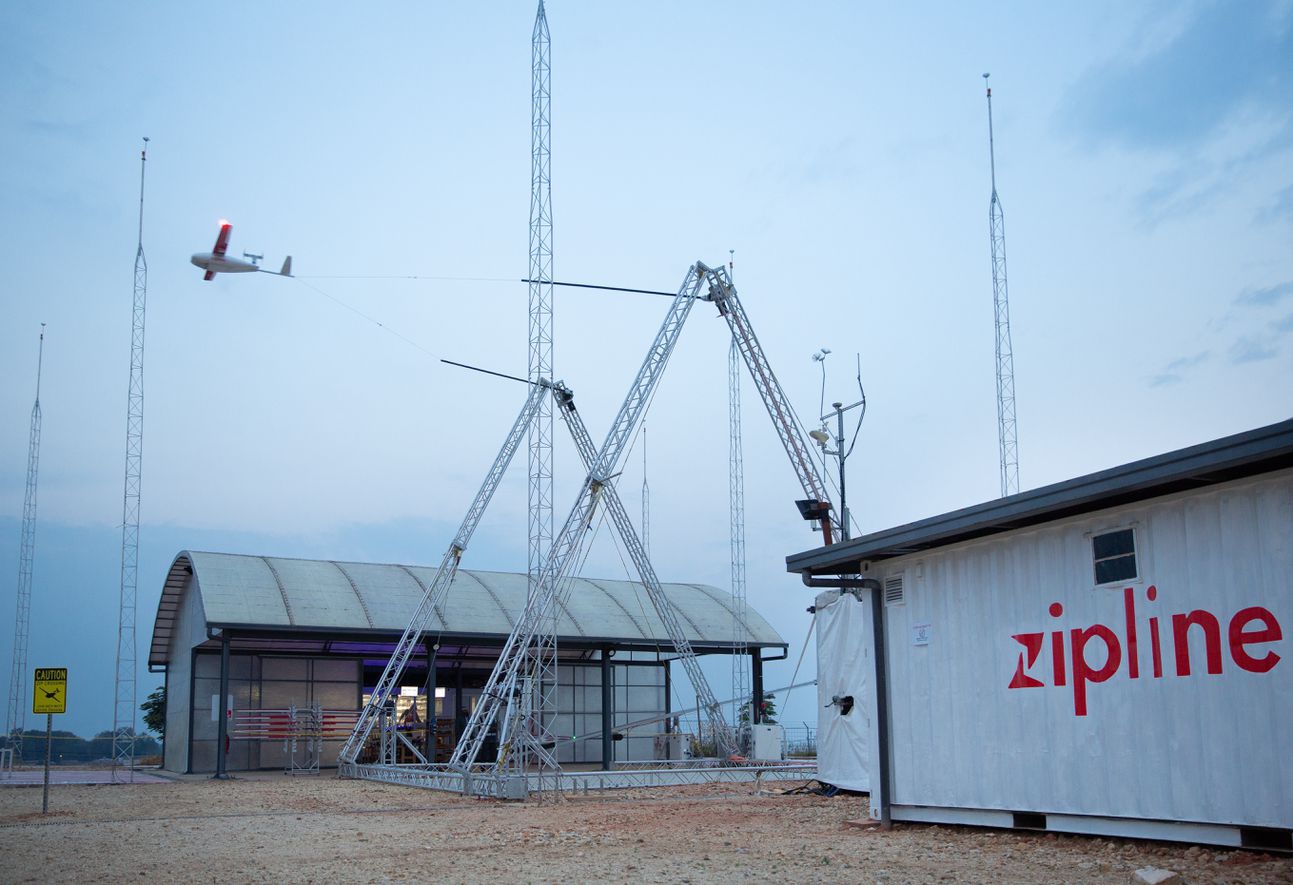 This is how a drone’s flight ends.

In the case of these coronavirus tests, the specimens have first arrived at either of two of the company’s distribution centers from various places, before winging to either Komasi or Accra. The flights are roughly 60 or 70 miles round-trip, respectively. So far, they’ve made just eight sorties total, although Zipline says they’ll keep operating them as needed as long as the outbreak lasts in the country.

Meanwhile, in the United States, the Financial Times reports that a Texas-based petroleum company has been granted a go-ahead from the FAA to employ drones to check out its infrastructure—flying further away from the operator than they can be seen, which is typically not allowed—because of the pandemic.