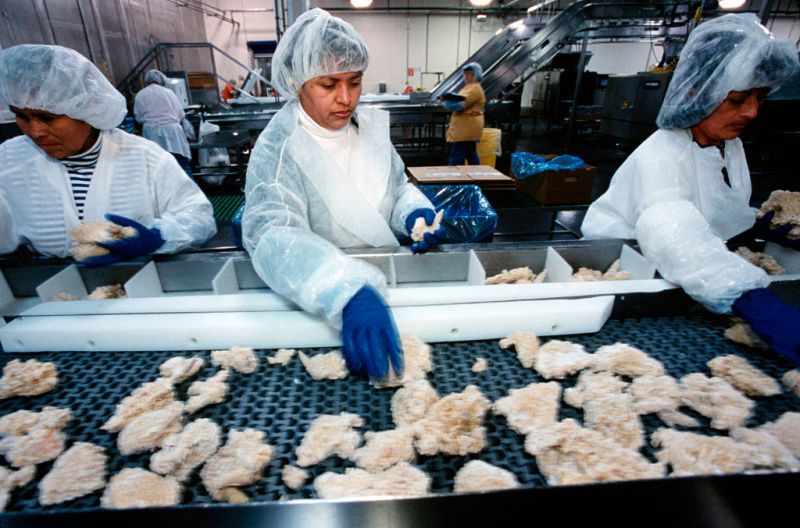 Tyson Foods, one of the U.S.’s biggest meat processors, didn’t mince words in a full page New York Times spread that ran Sunday, in which they warned, “the food supply chain is breaking.”

“As pork, beef and chicken plants are being forced to close, even for short periods of time, millions of pounds of meat will disappear from the supply chain,” John Tyson, Chairman of the Board of Tyson Foods, wrote in a letter published as an advertisement. “As a result, there will be limited supply of our products available in grocery stores until we are able to reopen our facilities that are currently closed.”

The Arkansas-based company says food waste is also a threat, as “farmers across the nation simply will not have anywhere to sell their livestock to be processed, when they could have fed the nation.”

“Millions of animals —chickens, pigs and cattle— will be depopulated because of the closure of our processing facilities,” Tyson writes. “The food supply chain is breaking.”

A spokesperson with the U.S. Department of Agriculture (USDA) said in a statement emailed to TIME that the USDA, together with the U.S. Food and Drug Administration and Centers for Disease Control and Prevention, will work to “ensure the food supply chain remains safe and secure.”

“The food supply chain is a critical industry in the United States and Secretary Perdue fully recognizes the need to keep workers and inspectors safe during the COVID-19 national emergency,” the spokesperson said. “USDA recognizes and supports the efforts of private industry and companies to maintain operational status of their facilities while also maintaining the safety and health of their work force.”

However, the USDA has also been criticized for letting millions of pounds of food rot while food banks struggle to keep up with sky-rocketing demand. The Agriculture Department lagged behind other federal agencies in its coronavirus response, taking more than a month to “make its first significant move to buy up surplus fruits and vegetables — despite repeated entreaties,” Politico reported Sunday.

Trump said at an April 10 coronavirus task force media briefing that he expects Secretary Sonny Perdue “to use all of the funds and authorities at his disposal to make sure that our food supply is stable and safe.”

Tyson Foods shuttered a large pork-processing plant in Iowa on April 22, after several workers tested positive for the coronavirus but it’s not the only company halting production at facilities. Other facilities that closed, at least temporarily, include a Smithfield Foods pork plant in South Dakota and a JBS beef plant in Colorado, according to the Associated Press.

In the Times ad, Tyson also pledged to try and ease the financial burden of health-related issues for employees. They promised “waiving the waiting period to qualify for short-term disability so workers can immediately be paid if they get sick… waiving the co-pay, co-insurance and deductible for doctor visits for COVID-19 testing… waiving co-pays for the use of telemedicine.”

The letter also committed to paying about $60 million in “thank you” bonuses to 116,000 frontline workers and Tyson truckers.

Tyson Foods and other big meat producers, like JBS USA and Smithfield Foods, have come under fire for worker illnesses and failing to provide adequate protective gear.

Tyson Foods said in its Sunday Times ad that it “places team member safety as our top priority” and detailed steps they have taken to protect staff, including taking their temperatures, “securing a supply of face coverings before the CDC recommended their use—and now, requiring them in all company facilities” and “conducting additional daily deep cleaning and sanitizing.”

A spokesperson for Tyson Foods said in an emailed statement to TIME that it was “one of the first food companies to implement measures to protect our team members” and that “despite our aggressive efforts, in some locations this was not enough and we decided to close several of our facilities.”

“At the moment, our other plants remain open and we are working hard to keep store shelves filled, however our facilities are running at reduced levels of production, and any additional shutdowns will further stretch an already strained food supply system—but if it is the right decision to shut down more facilities, we will do so,” the statement said.

The company says it remains cautious about pushing a full reopening of the economy.

“While certain parts of the economy have ‘closed’ and the food supply chain is breaking, parts remain open, and rightfully so,” the spokesperson told TIME. “We support a thoughtful reopening that prioritizes public health above all else, which means safety from COVID-19 and the availability of food.”