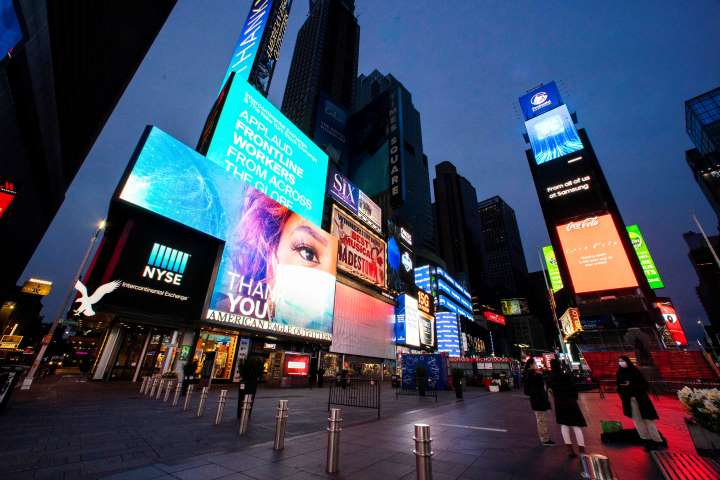 Doctors sound alarm about patients in their 30s and 40s left debilitated or dead. Some didn’t even know they were infected.

Thomas Oxley wasn’t even on call the day he received the page to come to Mount Sinai Beth Israel Hospital in Manhattan. There weren’t enough doctors to treat all the emergency stroke patients, and he was needed in the operating room.

The patient’s chart appeared unremarkable at first glance. He took no medications and had no history of chronic conditions. He had been feeling fine, hanging out at home during the lockdown like the rest of the country, when suddenly, he had trouble talking and moving the right side of his body. Imaging showed a large blockage on the left side of his head.

Oxley gasped when he got to the patient’s age and covid-19 status: 44, positive.

The man was among several recent stroke patients in their 30s to 40s who were all infected with the coronavirus. The median age for that type of severe stroke is 74.

As Oxley, an interventional neurologist, began the procedure to remove the clot, he observed something he had never seen before. On the monitors, the brain typically shows up as a tangle of black squiggles — “like a can of spaghetti,” he said — that provide a map of blood vessels. A clot shows up as a blank spot. As he used a needlelike device to pull out the clot, he saw new clots forming in real-time around it.

“This is crazy,” he remembers telling his boss.

Reports of strokes in the young and middle-aged — not just at Mount Sinai, but also in many other hospitals in communities hit hard by the novel coronavirus — are the latest twist in our evolving understanding of the disease it causes. The numbers of those affected are small but nonetheless remarkable because they challenge how doctors understand the virus. Even as it has infected nearly 2.8 million people worldwide and killed about 195,000 as of Friday, its biological mechanisms continue to elude top scientific minds. Once thought to be a pathogen that primarily attacks the lungs, it has turned out to be a much more formidable foe — impacting nearly every major organ system in the body.

Until recently, there was little hard data on strokes and covid-19.

There was one report out of Wuhan, China, that showed that some hospitalized patients had experienced strokes, with many being seriously ill and elderly. But the linkage was considered more of “a clinical hunch by a lot of really smart people,” said Sherry H-Y Chou, a University of Pittsburgh Medical Center neurologist and critical care doctor.

Now for the first time, three large U.S. medical centers are preparing to publish data on the stroke phenomenon. There are only a few dozen cases per location, but they provide new insights into what the virus does to our bodies.

A stroke, which is a sudden interruption of the blood supply, is a complex problem with numerous causes and presentations. It can be caused by heart problems, clogged arteries due to cholesterol, even substance abuse. Mini-strokes often don’t cause permanent damage and can resolve on their own within 24 hours. But bigger ones can be catastrophic.

The analyses suggest coronavirus patients are mostly experiencing the deadliest type of stroke. Known as large vessel occlusions, or LVOs, they can obliterate large parts of the brain responsible for movement, speech and decision-making in one blow because they are in the main blood-supplying arteries.

Many researchers suspect strokes in covid-19 patients may be a direct consequence of blood problems that are producing clots all over some people’s bodies.

Clots that form on vessel walls fly upward. One that started in the calves might migrate to the lungs, causing a blockage called a pulmonary embolism that arrests breathing — a known cause of death in covid-19 patients. Clots in or near the heart might lead to a heart attack, another common cause of death. Anything above that would probably go to the brain, leading to a stroke.

Robert Stevens, a critical care doctor at Johns Hopkins Hospital in Baltimore, called strokes “one of the most dramatic manifestations” of the blood-clotting issues. “We’ve also taken care of patients in their 30s with stroke and covid, and this was extremely surprising,” he said.

Many doctors expressed worry that as the New York City Fire Department was picking up four times as many people who died at home as normal during the peak of infection that some of the dead had suffered sudden strokes. The truth may never be known because few autopsies were conducted.

Chou said one question is whether the clotting is because of a direct attack on the blood vessels, or a “friendly-fire problem” caused by the patient’s immune response.

“In your body’s attempt to fight off the virus, does the immune response end up hurting your brain?” she asked. Chou is hoping to answer such questions through a review of strokes and other neurological complications in thousands of covid-19 patients treated at 68 medical centers in 17 countries. 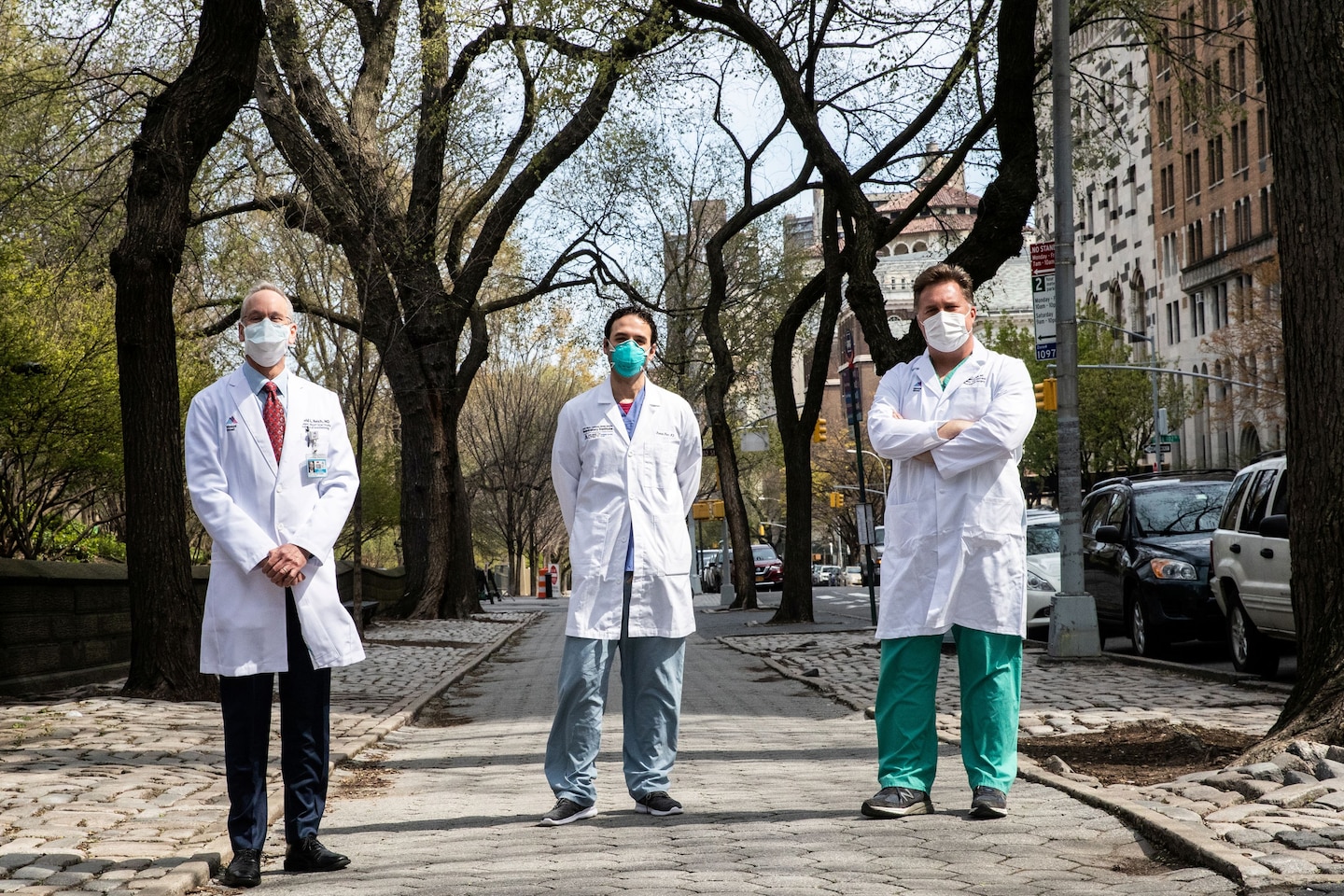 Thomas Jefferson University Hospitals, which operates 14 medical centers in Philadelphia, and NYU Langone Health in New York City, found that 12 of their patients treated for large blood blockages in their brains during a three-week period had the virus. Forty percent were under 50, and they had few or no risk factors. Their paper is under review by a medical journal, said Pascal Jabbour, a neurosurgeon at Thomas Jefferson.

In the vast majority of younger adults, covid-19 appears to result in mild illness with the risk of more severe consequences rising with every decade of age. According to Centers for Disease Control and Prevention data, 0.8 percent of U.S. deaths as of Apr. 18 were in people ages 25 to 34; 2 percent among those 35 to 44; and 5.4 percent among those 45 to 54.

Jabbour and his co-author Eytan Raz, an assistant professor of neuroradiology at NYU Langone, said that strokes in covid-19 patients challenge conventional thinking. “We are used to thinking of 60 as a young patient when it comes to large vessel occlusions,” Raz said of the deadliest strokes. “We have never seen so many in their 50s, 40s and late 30s.”

Raz wondered whether they are seeing more young patients because they are more resistant than the elderly to the respiratory distress caused by covid-19: “So they survive the lung side, and in time develop other issues.”

Jabbour said many cases he has treated have unusual characteristics. Brain clots usually appear in the arteries, which carry blood away from the heart. But in covid-19 patients, he is also seeing them in the veins, which carry blood in the opposite direction and are trickier to treat. Some patients are also developing more than one large clot in their heads, which is highly unusual.

“We’ll be treating a blood vessel and it will go fine, but then the patient will have a major stroke” because of a clot in another part of the brain, he said.

At Mount Sinai, the largest medical system in New York City, physician-researcher J Mocco said the number of patients coming in with large blood blockages in their brains doubled during the three weeks of the covid-19 surge to more than 32, even as the number of other emergencies fell. More than half of were covid-19 positive.

It isn’t just the number of patients that was unusual. The first wave of the pandemic has hit the elderly and those with heart disease, diabetes, obesity or other preexisting conditions disproportionately. The covid-19 patients treated for stroke at Mount Sinai were younger and mostly without risk factors.

“These are people among the least likely statistically to have a stroke,” Mocco said.

Mocco, who has spent his career studying strokes and how to treat them, said he was “completely shocked” by the analysis. He noted the link between covid-19 and stroke “is one of the clearest and most profound correlations I’ve come across.”

“This is much too powerful of a signal to be chance or happenstance,” he said.

In a letter to be published in the New England Journal of Medicine next week, the Mount Sinai team details five case studies of young patients who had strokes at home from March 23 to April 7. They make for difficult reading: The victims’ ages are 33, 37, 39, 44 and 49, and they were all home when they began to experience sudden symptoms, including slurred speech, confusion, drooping on one side of the face and a dead feeling in one arm.

Oxley, the interventional neurologist, said one striking aspect of the cases is how long many waited before seeking emergency care.

The 33-year-old woman was previously healthy but had a cough and headache for about a week. Over the course of 28 hours, she noticed her speech was slurred and that she was going numb and weak on her left side but, the researchers wrote, “delayed seeking emergency care due to fear of the covid-19 outbreak.”

It turned out she was already infected.

By the time she arrived at the hospital, a CT scan showed she had two clots in her brain and patchy “ground glass” in her lungs — the opacity in CT scans that is a hallmark of covid-19 infection. She was given two different types of therapy to try to break up the clots and by Day 10, she was well enough to be discharged.

Oxley said the most important thing for people to understand is that large strokes are very treatable. Doctors are often able to reopen blocked blood vessels through techniques such as pulling out clots or inserting stents. But it has to be done quickly, ideally within six hours, but no longer than 24 hours: “The message we are trying to get out is if you have symptoms of stroke, you need to call the ambulance urgently. ”

As for the 44-year-old man Oxley was treating, doctors were able to remove the large clot that day in late March, but the patient is still struggling. As of this week, a little over a month after he arrived in the emergency room, he is still hospitalized.