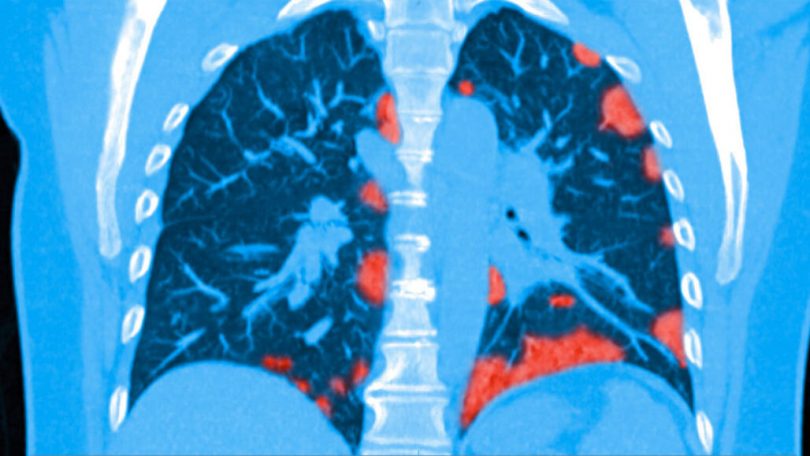 Among patients who have recovered from COVID-19 in China comes the first evidence that some may suffer long-term lung damage from the disease.

In 70 patients who survived COVID-19 pneumonia, 66 had some level of lung damage visible in CT scans taken before hospital discharge, researchers report March 19 in Radiology. The damage ranged from dense clumps of hardened tissue blocking blood vessels within the tiny air sacs called alveoli, which absorb oxygen, to tissue lesions around the alveoli, Yuhui Wang, a radiologist at Huazhong University of Science and Technology in Wuhan, China, and colleagues found.

The tissue lesions can be a sign of chronic lung disease. Similar damage has been documented in survivors of SARS and MERS, respiratory diseases caused by coronaviruses similar to the SARS-CoV-2 virus behind COVID-19. Long-term studies of SARS patients have shown that roughly a third of people who recovered from severe bouts were left with permanent lung damage. In the case of MERS, one study found about a third of people who recovered from a serious infection still had signs of lung damage about seven months later.

But while initial lung images indicate that SARS and MARS typically set into just one lung, COVID-19 appears to be more likely to afflict both lungs right away. In 75 of the 90 patients admitted to Huazhong University Hospital with COVID-19 pneumonia from January 16 to February 17, damage was seen across both lungs, Wang and colleagues report. CT scans taken before hospital discharge revealed that 42 out of 70 patients displayed the type of lesions around the alveoli that are more likely to develop into scars. 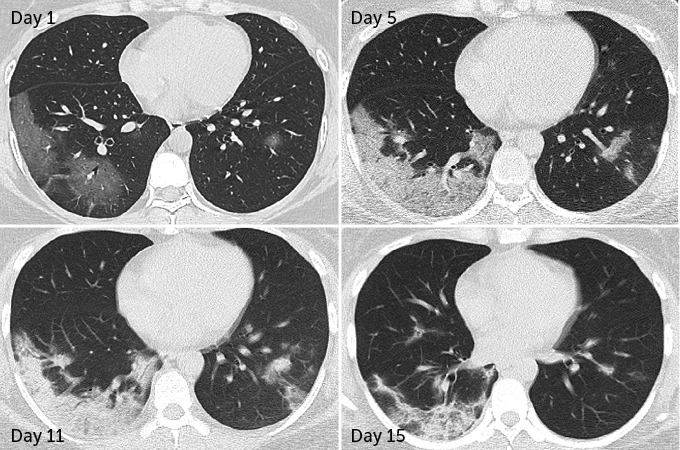 These CT scans of a 35-year-old woman with COVID-19 pneumonia illustrate how some lung damage remains even after recovery. When she was admitted to the hospital (day 1, top left), a scan revealed tissue or fluid blocking blood vessels in both lungs, though at this stage it was mainly confined to the bottom right lobe. Some of this subsided by day 15 (bottom right), a couple days before she left the hospital. But fuzzy patches in the bottom of the left lung indicate tissue filled with fluid rather than air, which can cause further damage.

Given how widely the pandemic has spread, chronic lung conditions from COVID-19 could challenge many thousands of people in years to come. As of April 27, more than 2.9 million people worldwide have been diagnosed with the disease. In comparison, SARS, or severe acute respiratory syndrome, sickened about 8,000 people during its 2003–2004 outbreak. MERS, or Middle East respiratory syndrome, has infected more than 2,500 people (SN: 1/24/20). While an estimated 80 percent of COVID-19 cases are mild, the rest display problems ranging from breathing difficulties to respiratory failure (SN: 2/25/20).

Some lung damage seen in the Wuhan study cases are likely to gradually heal or disappear, Wang and colleagues suspect. However, in some patients, lung abnormalities will harden into layers of scar tissue known as pulmonary fibrosis. That scarring stiffens the lungs, making it hard to get enough oxygen. People with pulmonary fibrosis typically suffer shortness of breath, limiting their ability to be physically active.

Certain patients are most at risk of developing this type of scarring. They include elderly patients who’ve had severe bouts of COVID-19 pneumonia, patients with other illnesses such as cancer or diabetes and those with other lung conditions caused by smoking or pollution, says Xiaolong Qi of the First Hospital of Lanzhou University in China, where another COVID-19 lung damage study is under way.

A hyperactive immune response may be to blame for scarring. A sudden storm of molecules called cytokines causes inflammation that can damage lung tissue and fill the alveoli with pus. In the worst cases, damage from this inflammation is so severe that it eventually leaves thickened scar tissue in honeycomb-shaped clusters — something also seen in SARS and MERS. While it’s unclear whether any of the Wuhan patients had such severe damage, it’s been described in other COVID-19 cases.

Breathing with the help of a ventilator can also cause lung damage, and it may be difficult to tell which patients’ injuries stem from a dysfunctional immune response to the virus versus being on ventilator, says radiologist Karuna Das of United Arab Emirates University in Al Ain. Having studied MERS patients, Das is now investigating the long-term health impact of COVID-19.

“During the MERS outbreak, some patients were on ventilators for more than 100 days,” he says. “Oxygen is being infused with positive pressure, and when the lungs get inflated beyond their limits, it causes trauma.” About a third of MERS patients who suffered lung damage had not fully recovered more than seven months on, Das and colleagues reported in 2017 in the Indian Journal of Radiology and Imaging.

Long-term outcomes for SARS survivors also suggest some COVID-19 patients may face lasting lung problems. Researchers at a Beijing hospital found that the percentage of lung lesions across 71 patients changed little between 2004 and 2018, as reported February 14 in Bone Research.

“Based on what we have seen from SARS, MERS and H1N1 influenza, we expect that at least some COVID-19 patients will have some residual disease,” says Ali Gholamrezanezhad, a radiologist at the University of Southern California in Los Angeles. He and coauthors review lessons from SARS and MERS in the May American Journal of Roentgenology. Some survivors, he says, will have “some residual fibrosis, scars and their lung function and their lung anatomy doesn’t go back to normal.”