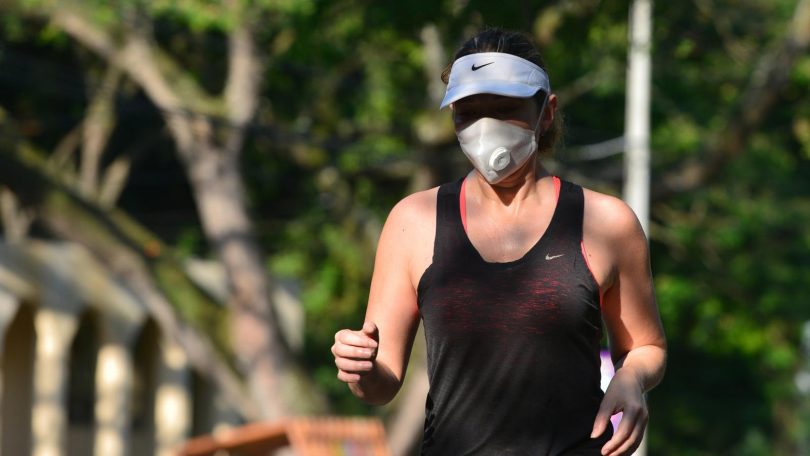 There’s a murky relationship between air pollution and coronavirus, which may mean that tackling air pollution will be a crucial part of easing lockdown.

Clear blue skies over the world’s megacities have become a visible mark of the pandemic. It’s a welcome change for many, not least because outdoor air pollution kills around 4.2 million people worldwide each year.

But when it comes to Covid-19, these risks to respiratory health are not the sum of their parts; researchers in the US are building a case that suggests air pollution has significantly worsened the Covid-19 outbreak and led to more deaths than if pollution-free skies were the norm. As well as predisposing the people who have lived with polluted air for decades, scientists have also suggested that air pollution particles may be acting as vehicles for viral transmission.

These new findings could have a significant impact on how governments choose to ease lockdowns in the coming months, as scientists say that improving air quality could play an important role in overcoming the pandemic.

One recent study found that even small increases in fine particulate matter, known as PM2.5, have had an outsized effect in the US. An increase of just 1 microgram per cubic metre corresponded to a 15% increase in Covid-19 deaths, according to the researchers, led by Xiao Wu and Rachel Nethery at the at the Harvard University T.H. Chan School of Public Health.

For comparison, the safe limit designated by the US’s Environmental Protection Agency is 12 micrograms PM2.5 per cubic metre, while the World Health Organization has a guideline figure of 10 micrograms per cubic metre as an annual mean. Parts of New York have annual PM2.5 levels consistently above this safe threshold. Researchers suggest that this could have played a part in the scale of New York State’s coronavirus outbreak, with deaths as of April by far the highest of any state. 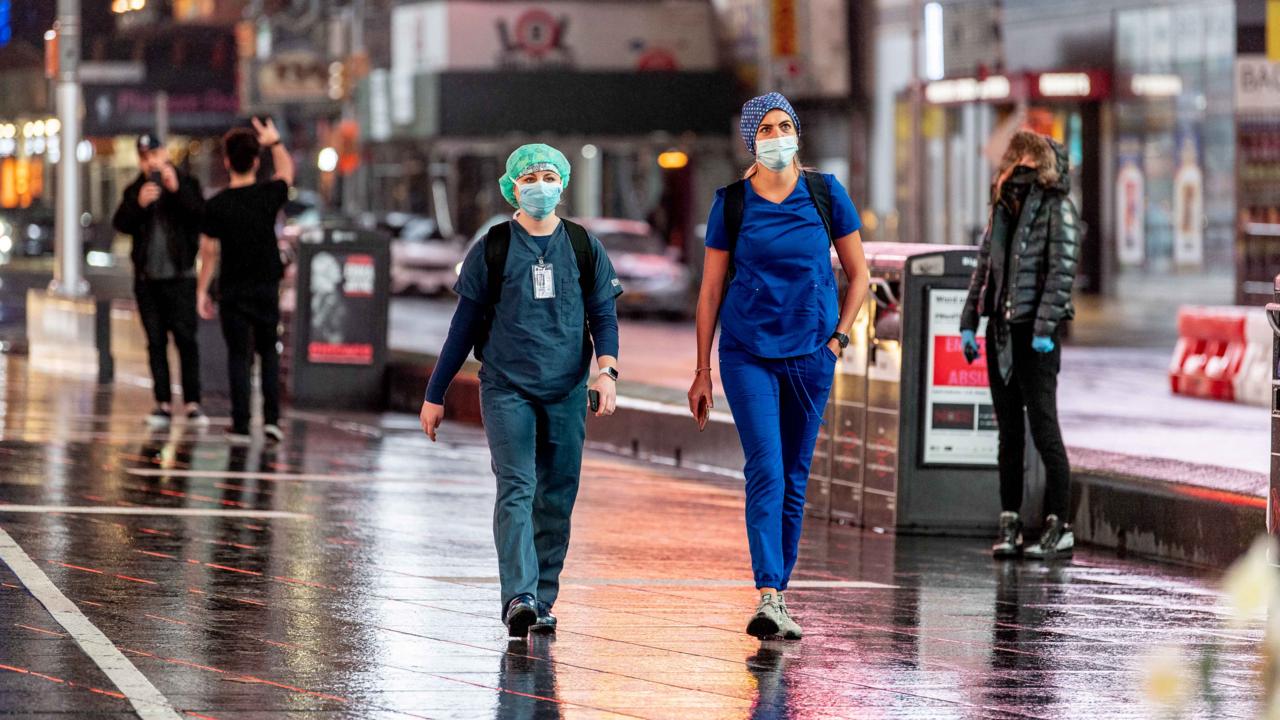 “The evidence we have is pretty clear that people who have been living in places that are more polluted over time, that they are more likely to die from coronavirus,” says Aaron Bernstein, the director of the Center for Climate, Health, and Global Environment at Harvard University.

In the study, which looked at 3,080 counties in the US, people who had lived in counties with long-term pollution exposure for 15-20 years had significantly higher mortality rates, says Wu.

While the study has yet to be peer-reviewed by independent experts, Wu says that the association is likely down to the higher risk of existing respiratory and heart diseases in areas of higher pollution. Air pollution is also known to weaken the immune system, compromising people’s ability to fight off infection, according to the European Public Health Alliance.

“If Manhattan had lowered its average particulate matter level by just a single unit, or one microgram per cubic meter, over the past 20 years, the borough would most likely have seen 248 fewer Covid-19 deaths by this point in the outbreak [4 April 2020],” the researchers conclude.

A study of air quality in Italy’s northern provinces of Lombardy and Emilia Romagna also found a correlation between Covid-19 mortality rates and high levels of pollution. Lombardy makes up the vast majority of the country’s deaths, at 13,325 of Italy’s 26,644 as of 26 April, while Emilia Romagna was the province with the next greatest death toll, at 3,386. The researchers questioned the role of low air quality in their becoming hotspots, concluding that: “the high level of pollution in northern Italy should be considered an additional co-factor of the high level of lethality recorded in that area”.

These are not the first studies to highlight a substantial link between air pollution levels and deaths from viral diseases. A 2003 study found that patients with Sars, a respiratory virus closely related to Covid-19, were 84% more likely to die if they lived in areas with high levels of pollution. 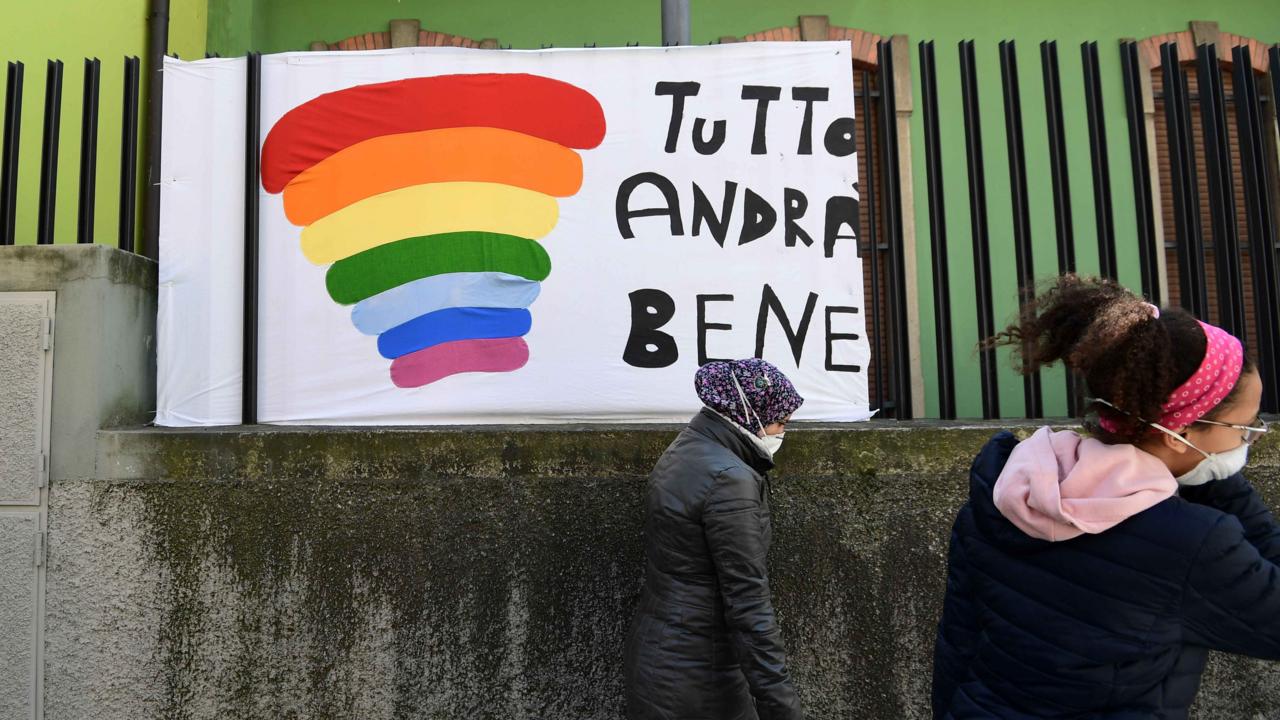 Parts of northern Italy have been hardest hit by Covid-19, and Italian researchers have questioned whether low air quality played a role in this

“For every small increment in air pollution, there’s a substantial increase in death,” says Harvard’s Aaron Bernstein. “You could pick any city in the world and expect to see an effect of air pollution on people’s risk of getting sicker from coronavirus.”

What’s more, another preliminary study detected Sars-CoV-2 (the virus that causes Covid-19) could even be hitching a ride on PM10 particles – the same stuff as PM2.5, just in slightly larger particles. The researchers, based at several universities across Italy, suggest the virus could be dispersed more widely on air pollution particles. But, like much research on coronavirus so far, this study too has yet to go through robust peer-review.

These findings could have a significant impact on how governments choose to ease lockdown restrictions and public health officials allocate medical resources such as ventilators.

In the short-term, the findings could incentivise polluted countries which have not yet suffered severe outbreaks to adopt preventive measures. “They could take extra precautions, for example more stringent social distancing measures,” Wu suggests. 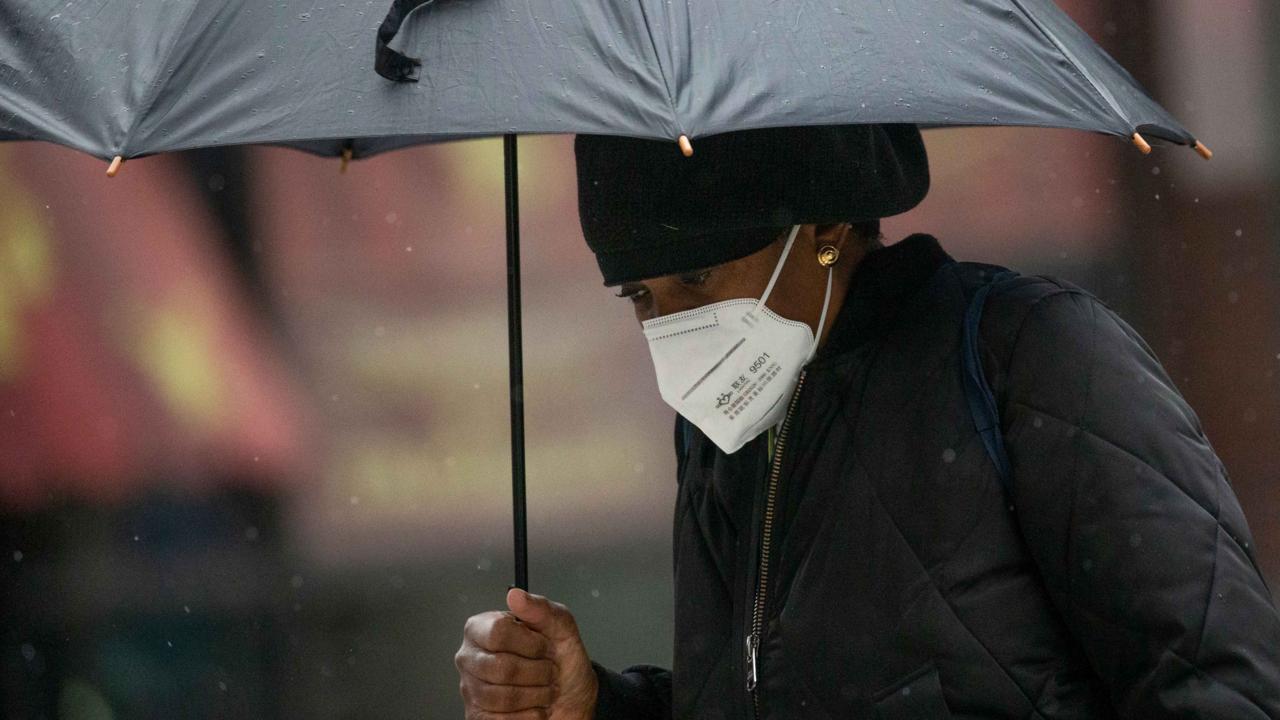 The Harvard researchers say their findings are particularly important for poor minority communities, who tend to be more exposed to air pollution, contributing to a higher risk of becoming seriously ill from coronavirus. (Read more about the racial disparities of Covid-19)

In the US, some ethnic minorities are disproportionately exposed to air pollution, primarily caused by the consumption by white Americans, according to a 2018 study. Black and Hispanic people are typically exposed to 56% and 63% more PM2.5 pollution than they produce through consumption and daily activities. In sharp contrast, non-Hispanic white people are typically exposed to 17% less pollution than they produce. African Americans are also more likely than white Americans to have underlying health conditions, such as diabetes or heart disease, a disparity linked to a long legacy of social inequality.

“Dirty air is preventing people of colour, in low-income communities in particular, from being able to have a fighting chance against this pandemic,” says Gina McCarthy, president of the Natural Resources Defence Council in the US.

As lockdowns have shut down factories and kept cars off the roads, global pollution levels have fallen drastically. According to this year’s Air Quality Index, cities with historically high levels of PM2.5 have witnessed a dramatic drop in pollution since enforcing lockdowns; 44% in Wuhan, 54% in Seoul and 60% in New Delhi. 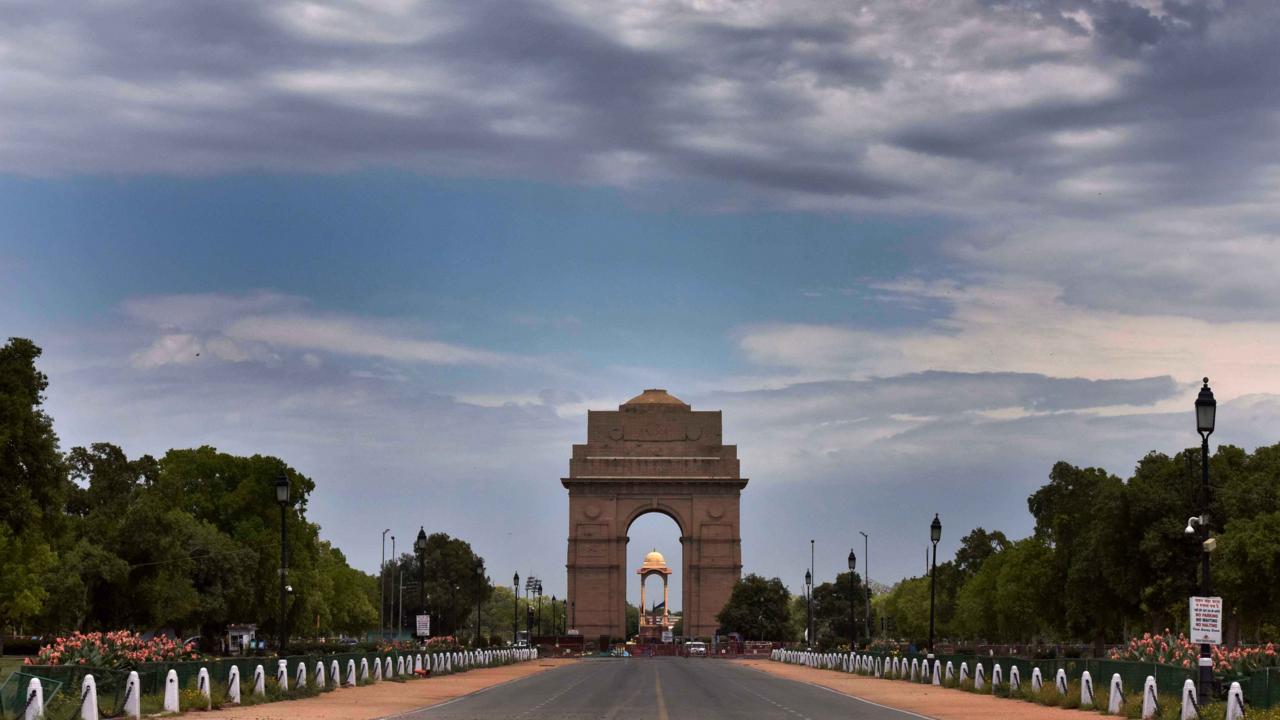 Coronavirus lockdown has transformed cityscapes with a rarely seen blue backdrop, including that shown here in Delhi

But scientists have said the fall in polluting emissions is just a short-term result and that air quality is likely to worsen again as lockdowns are lifted if we return to business as usual. Pollution levels must be limited as much as possible to minimise the effects of a second wave of coronavirus, they warn.

“The study results underscore the importance of continuing to enforce existing air pollution regulations to protect human health both during and after the COVID-19 crisis,” the researchers write.

“We cannot get out of this crisis with the same levels of pollution. It has to be a green recovery,” says Maria Neira, director of environment, climate change and health at the World Health Organization.

The Harvard study has highlighted the close link between emissions and public health and notes how both can stall economic growth. The reduction of pollution should be framed not just as an important benefit to public health, but as a major economic incentive, says Neira. “If we go back to the former economic development that will be creating a massive health problem and a massive economic problem at the same time,” Neira says.

Governments should take the scientific findings on board when deciding how to ease the lockdowns, says Neira. “We need to avoid the temptation, in the name of the recovery of the economy, to go back to intensive use of fossil fuels or intensive use of cars,” she says. 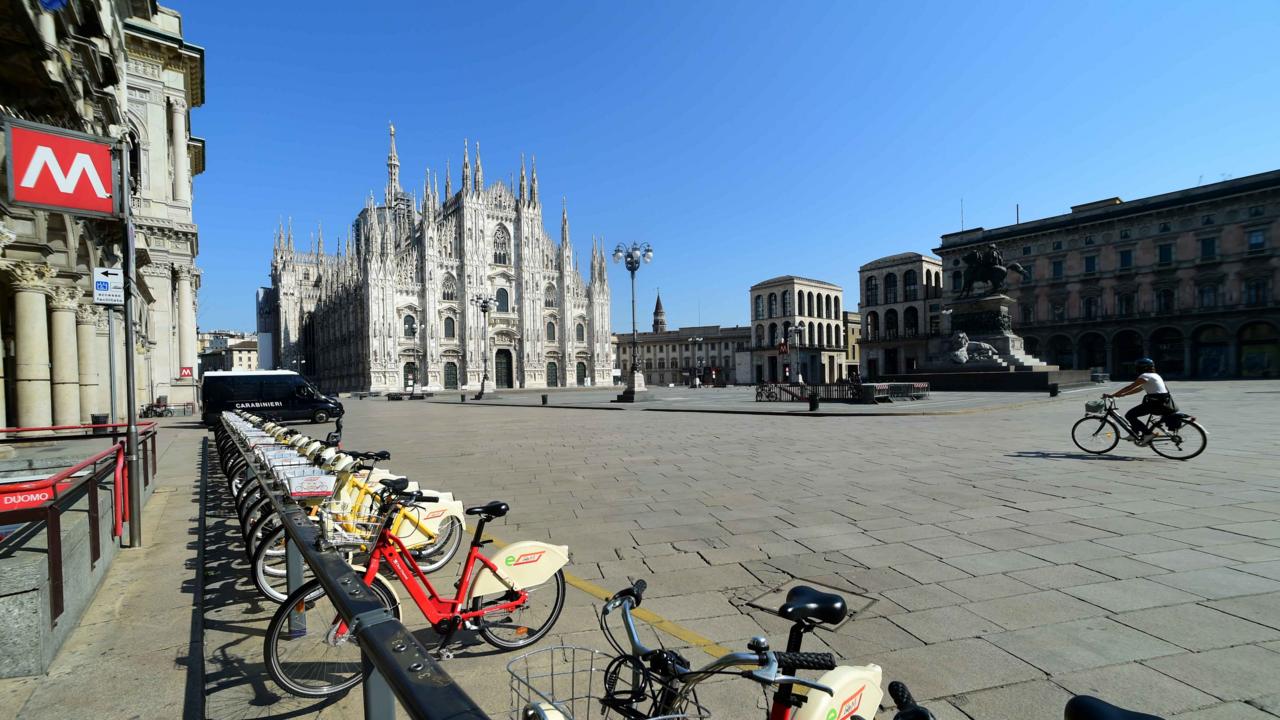 Some cities have hatched plans to avoid this. Milan, which lies in Italy’s worst-hit region of Lombardy, plans to emerge from the lockdown with cleaner transport options in place. “The aim is to ensure the virus spreading containment through soft and sustainable mobility solutions,” Milan’s mayor Giuseppe Sala. “It is key that [lifting the lockdown] does not result in an excessive use of private cars, with a consequent increase in air pollution.”

To deter people from getting in their cars, Milan will create 35km of new cycle paths to make cycling and scooter transport more accessible. Milan metro will only run at 30% capacity to allow for social distancing, reducing the number of passengers it can carry from 1.4 million to 400,000 people.

It is crucial that governments invest in a more sustainable society, experts say. “Today we recognise that the world can change on a dime,” McCarthy said. “We have to invest those stimulus dollars towards a better future [and] be prepared to respond to pandemics like this.”

The global response to Covid-19 should be harnessed to create a healthier society, one that is better prepared for emergencies, according to Neira.

“After the masks are gone, we will breathe cleaner,” she says.