The more people voluntarily downloaded a smartphone app designed to track the contacts of people infected, Morrison said, the sooner life could return to normal.

“I’ll be calling on Australians to do it as a matter of national service,” Morrison said. “In the same way people used to buy war bonds, back in the war times to come together to support the effort.”

As countries seek to safely ease lockdowns that have crippled economic and social life, authorities around the world are seeking to strike a bargain with their citizens: a quicker return to normal life in return for embracing smartphone apps that streamline the laborious business of contact tracing but raise questions about privacy and remain largely untested.

Australia launched COVIDSafe on Sunday, attracting more than 2 million downloads within 24 hours, after Singapore and Vietnam launched their own contact tracing apps.

Multiple US states, Japan, Britain, Germany and New Zealand – which on Tuesday eased its near-total lockdown after announcing the elimination of community transmission – are planning to roll out their own apps.

“Digital technologies are important for fast and efficient contact tracing – so are going to be very important for dealing with any border control failures if places such as New Zealand, Australia and Taiwan are able to successfully eliminate this pandemic virus,” said Nick Wilson, a professor of public health at the University of Otago.

Although lockdowns have been credited with slowing new infections to a trickle in countries such as Australia and New Zealand, experts warn infections are likely to spike after restrictions are eased unless authorities can rapidly track, test and isolate potentially infected persons.

Although it has proved effective in controlling past epidemics, traditional contact tracing, which involves public health officials working phones and knocking on doors to interview patients about their close contacts, becomes more difficult as the number of infections rises. Such an approach is also limited by the tendency of people to fail to recall or misremember precise details about even recent interactions.

South Korea’s use of aggressive digital contact tracing – employing GPS location data from smartphones, credit card records and CCTV footage – has been credited with bringing its outbreak under control but has also stoked privacy concerns, not least because of the public disclosure of people’s movements alongside personal details such as gender and age range. 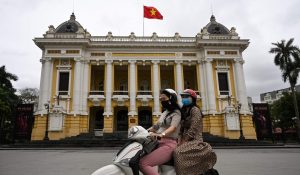 Vietnam is among the countries to have released a contact tracing app.

Contact tracing apps such as Australia’s COVIDSafe do not log a user’s location or even necessarily their real name, instead using Bluetooth technology to exchange a “digital handshake” between users once they come into proximity. When a user of the app tests positive for the virus, authorities can quickly refer to a record of each interaction stored on the app to trace the patient’s close contacts during the recent past.

“Replacing contact bans with contact tracing could enable us to contain the spread of the virus and at the same time regain some of the beloved freedoms that we had to limit these past few months,” said Ulf Buermeyer, president of the Society for Civil Rights in Germany. “From a perspective of fundamental and human rights, tracing high-risk contacts in this fashion constitutes a milder intervention than a turn to what can be described as Europe’s ‘Plan B’: not being able to freely visit your loved ones, practise your religion and profession or attend political assemblies.”

To work effectively, the apps need large uptake by the public. The Australian government has estimated that at least 40 per cent of the population needs to use the app for it to be effective, while experts in the UK have estimated that uptake there would need to be at least 60 per cent.

Last month, Australia’s Morrison declined to be drawn on whether the app could be made mandatory if too few people used it, saying only it was his preference to “give Australians the go at getting it right”.

Public buy-in so far has been mixed.

Singapore’s app, TraceTogether, has been downloaded by less than 20 per cent of the public since its launch on March 20 – and almost all of its users signed on in the first fortnight after its release.

Office manager Vincent Lim, 64, said he had declined to download the app out of concern for an “intrusion of privacy, that my location could be traced even after the coronavirus. How would I know that my location can’t be traced?”

Australia’s early uptake – about 2.8 million downloads as of Wednesday – appears more promising, although millions more Australians must still download the app for the government to reach its target.

“It will be extremely challenging for countries to get enough people to use these apps without either forcing them or using incentives tied to the removal of Covid lockdown measures for individual users,” said James Crabtree, an associate professor of practice at the Lee Kuan Yew School of Public Policy at the National University of Singapore.

Even without the use of intrusive GPS data, privacy has been a concern, particularly in Australia and European countries such as Germany, which recently abandoned plans to funnel data from its app into a centralised database amid a public outcry.

To allay such concerns, the Australian and German governments have developed apps that initially store data on the phone itself. The Australian government has insisted health authorities will only be able to upload encrypted information from the app to a database for analysis with the user’s permission and that law enforcement and other agencies will not be granted any access whatsoever.

Robert Merkel, a lecturer at the Clayton School of Information Technology, Monash University, said such a system still ultimately meant trusting the government with the keys to unlock the temporary IDs generated by the app after information had been handed over.

“Whether these constitute major privacy concerns depends very much on context,” said Merkel. “For many people, these issues may be of little concern.”

“My view on the Australian and Singaporean ones, which are very similar, is that the privacy protections are OK, they could be improved.”

Craig Mark, a professor at Kyoritsu Women’s University in Tokyo, said the demographics of countries such as Japan could be a factor in the roll out of the apps.
“Another obstacle would be that older people, who are the most at risk from Covid-19, are less tech-savvy and therefore less likely to download the app – over a quarter of Japan’s population is over 65,” said Mark. “And given the Abe government’s erratic response to the pandemic so far, it is questionable whether it can exercise the competence and leadership required to implement such a campaign effectively.”
While persuading the public to participate remains a challenge, there are also technical limitations that raise questions about the effectiveness of the apps.
Ross Anderson, a professor of security engineering at the Computer Laboratory, Cambridge University, said the apps were likely to produce false matches, especially in densely-packed Asian cities.
“You get false alarms from the fact that Bluetooth isn’t designed as a ranging technology,” Anderson said. “If you turn up the volume enough to be sure to detect phones 2 metres away, you’ll get a fair number that are 5 metres or 10 metres away.”
Advocates of contact tracing apps readily admit they are no panacea. Even if contact tracing becomes so efficient that countries feel confident enough to open up without fear of large outbreaks of infection, measures such as mask-wearing, restrictions on large events and increased spacing at restaurants and other venues may endure for some time to come.
Experts also agree the technology cannot completely replace human contract tracers. In a blog post this month, TraceTogether’s product lead Jason Bay warned against “hubris” and “technology triumphalism” while insisting contact tracing “should remain a human-fronted process”.
“We can still rely on traditional contact tracing mechanisms,” said Abrar Ahmad Chughtai, a lecturer in international health at the University of New South Wales. “Contact tracing apps should just supplement traditional contact tracing mechanisms.”
Source: https://www.scmp.com/week-asia/health-environment/article/3082175/australias-covidsafe-singapores-tracetogether-are