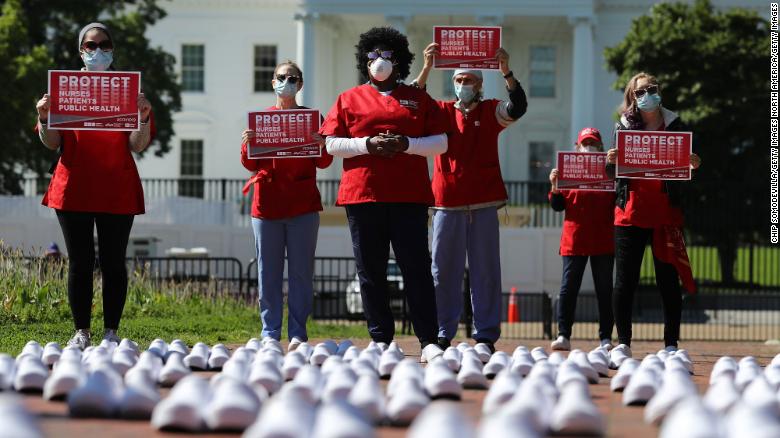 With nearly all states partially reopened this week, backlash and frustrations are growing as Americans struggle with ways to combat the deadly coronavirus.

By Sunday, more than 45 states will have relaxed restrictions on some combination of businesses, services or parks, hoping to lift economies crushed by a pandemic that has killed at least 77,178 people in the United States and infected over 1.2 million.
In the past week, tensions between two goals — to keep people healthy and to get people working — have been increasingly laid bare, with groups asserting one is being emphasized at the cost of the other.
More than two-thirds of Americans — 68% — are concerned about their states being reopened too quickly, according to a new poll from Pew Research Center.
But after weeks of stay-at-home orders, protesters have taken to the streets for days, demanding states allow businesses to reopen. Even instructionsto wear masks to stop the spread of the virus have become a flashpoint, leading to one alleged killing in Michiganand accusations of government overreach.
And the US economy has taken a hit, losing 20.5 million jobs in April, the government said Friday, the largest decline since it began tracking the data in 1939. That’s on top of 870,000 jobs lost in March. The tally for those two months is more than double the US jobs lost during the financial crisis of 2007-2008.
Meanwhile, evidence continued emerging this week that the virus is hitting certain vulnerable communities — such as those at nursing homes and prisons — the hardest. And there was more research suggesting African Americans may be dying from Covid-19 at disproportionately high rates.
Experts say relaxed social distancing restrictions now will make death tolls worse than they would have been. One model from the University of Washington projects 134,000 coronavirus deaths nationwide by August, nearly double its previous forecast.
One of the latest states to relax restrictions is California, which had been one of the first states to issue a stay-at-home order. Starting Friday, some retail stores may offer more curbside pickup and potentially delivery, though they should encourage social distancing, officials said.
Rhode Island will lift its stay-at-home order on Saturday, becoming the first state in the Northeast to do so, Gov. Gina Raimondo said.
But things aren’t wide open yet. She warned Mother’s Day on Sunday “is absolutely not a time to visit your mom in a nursing home or an assisted living facility.”
States are not ready to reopen, experts warn
Health experts warn that states have not met the federal guidelines for reopening, including aggressive testing and tracing, and a downward trajectory of documented cases in a 14-day period. Reopening risks setting off another wave of the pandemic and its effects will not be immediately known, experts have said.
“It will be at least two to three weeks before we see an increase in the number of infections because it takes time for individuals to infect others and for them to display symptoms,” data scientist Youyang Gu, whose coronavirus projection model is cited by the Centers for Disease Control and Prevention, said this week.
The CDC has created a 17-page draft recommendation on how to reopen the economy, with details beyond what was offered last month — including specifics for schools and churches. But the Trump administration will not implement it, a senior CDC official said Thursday.
On Friday, White House press secretary Kayleigh McEnany said the guidelines were still in the editing process.
“Those aren’t CDC guidelines,” she told reporters. “Those are guidelines in draft form that a rogue employee has given you for whatever personal reason they decided to do that.”
Meanwhile, a new study illustrates how much states’ loosened restrictions may increase people’s mobility.
After Georgia began letting certain personal-service businesses reopen on April 24, trips to the state from across the nation rose by 13%, or 62,441 trips a day, according to researchers at the University of Maryland.
Glimmers of good news appeared in two hotspots.
In Louisiana, hotspot Orleans Parish reported zero Covid-19 related deaths for the second day in a row. The state remains under a stay-at-home order until May 15 and Gov. John Bel Edwards is expected to address when the state will start reopening on Monday.
In New York, Gov. Andrew Cuomo said the hospitalization and death rates are going down and “I feel that we are for the first time in this engagement, we’re actually ahead of the virus.” 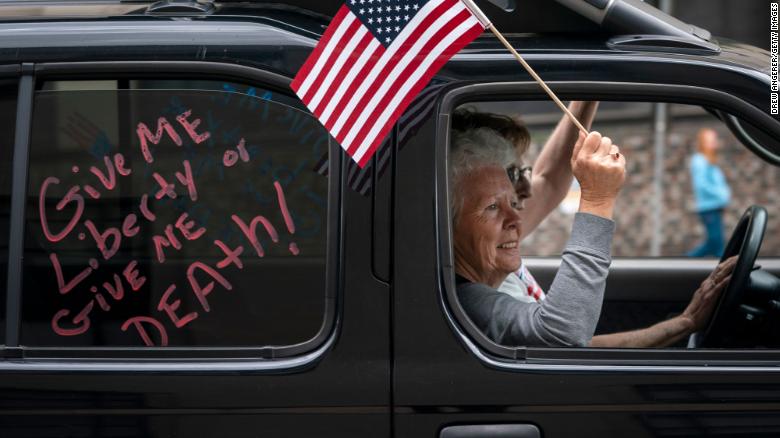 Protesters call for the state to lift stay-at-home orders and reopen the economy in downtown Richmond, Virginia on Wednesday.
Calls to wear masks become a flashpoint
To slow the predicted spread of the virus, some cities are asking people to wear masks in public places. But those guidelines have been met with resistance, leading to confrontations.
In Michigan, two incidents involving masks made headlines nationwide. In one, a Family Dollar security guard was shot dead after he told a woman to wear a face mask, officials said. Police also arrested a man who allegedly wiped his nose on the sleeve of a Dollar Tree employee who asked him to wear a mask.
Protesters have flocked the Michigan Capitol for days, demanding an end to the state of emergency in place through May 28. But Gov. Gretchen Whitmer also relaxed restrictions so some businesses can reopen and the public can participate in outdoor activities like golf and motorized boating.
In Florida’s Miami-Dade County, a bus driver says that after she asked a coughing passenger to wear a mask, that person spat on her and fled. In Miami Beach, a man shouted “this is a false flag, a fake pandemic” in a grocery store during a profanity-laced tirade this week as a code compliance officer told him he needed a mask to enter.
The city of Stillwater, Oklahoma, revoked an order requiring residents to wear face coverings inside buildings after workers received threats.
Steven Taylor, a clinical psychologist and author of “The Psychology of Pandemics,” said people tend to rebel when they’re told what to do, even when the measures are to protect them.
“People value their freedoms,” he said. “They may become distressed or indignant or morally outraged when people are trying to encroach on their freedoms.” 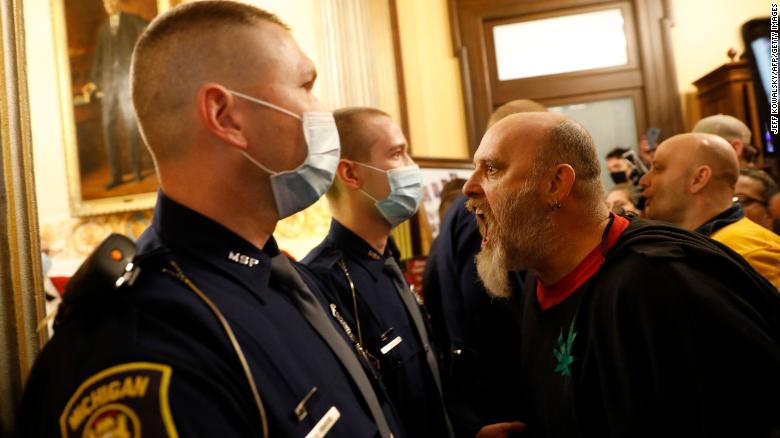 Unmasked protesters in Michigan try to enter the state’s House of Representatives chamber but are blocked by masked Michigan State Police.

The virus is hitting hard in some vulnerable communities

As some people rebel against protective measures, the virus continues to hit hard in places where social distancing is not an option.
Thousands of inmates have tested positive for coronavirus in federal and state prisons — many of whom showed no symptoms.
In Ohio, more than 20% of the people infected with coronavirus are prisoners. And in Colorado, the state’s largest outbreak is ina correctional facility.
At the Lompoc Federal Correctional Complex in California, 823 inmates and 25 staff have tested positive according to data from the Federal Bureau of Prisons.
Things are just as bad in nursing homes, where the population is especially vulnerable. In Louisiana, more than 30% of the state’s coronavirus deaths are from nursing homes and long-term care facilities. In New Hampshire, they make up nearly 80% of the cases while in Arkansas, almost half of all of the state’s cases are in prisons and nursing homes.
Officials in several states have called for more testing in correctional facilities and nursing homes.
“Nursing homes have been ground zero for Covid-19,” said Seema Verma, the administrator of the Centers for Medicare and Medicaid Services. 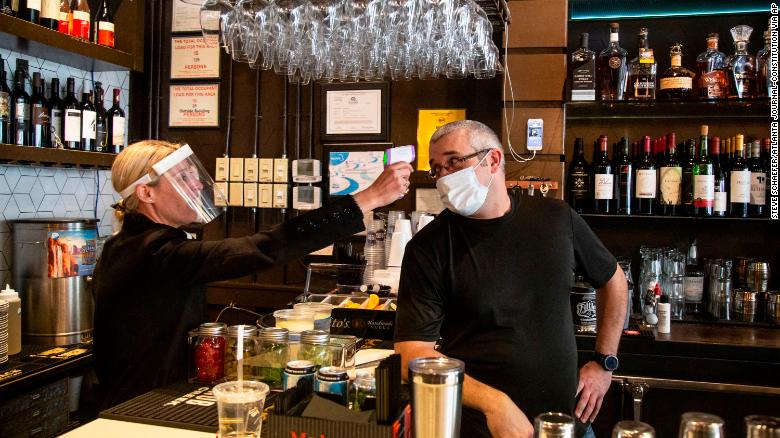 Tavern owner Jenna Aronowitz takes the temperature of bartender Shane Goode before the restaurant opens for sit down meals in Brookhaven, Ga.

It’s taken a deadly toll on the black community

America has an inequality problem and the coronavirus crisis is making it worse.
The pandemic is leaving few people untouched, but the toll is far more deadly for African Americans, who are dying at higher numbers.
African Americans make up 13.4% of the American population. But counties with higher black populations account for more than half of all coronavirus cases and almost 60% of deaths, according to a new study.
Disparities, including access to health care, are likely to blame, researchers concluded.
“Structural factors including health care access, density of households, unemployment, pervasive discrimination and others drive these disparities,” researchers said. “Social conditions, structural racism, and other factors elevate risk for Covid-19 diagnoses and deaths in black communities.”
The study involved scientists from Emory and Johns Hopkins universities, the University of Mississippi Medical Center and Georgetown University.
Of the more than 3,100 counties researchers studied coronavirus cases from late January to mid-April, they found deaths were higher in disproportionally black rural and small metro counties.
Source: https://edition.cnn.com/2020/05/08/health/us-coronavirus-friday/index.html