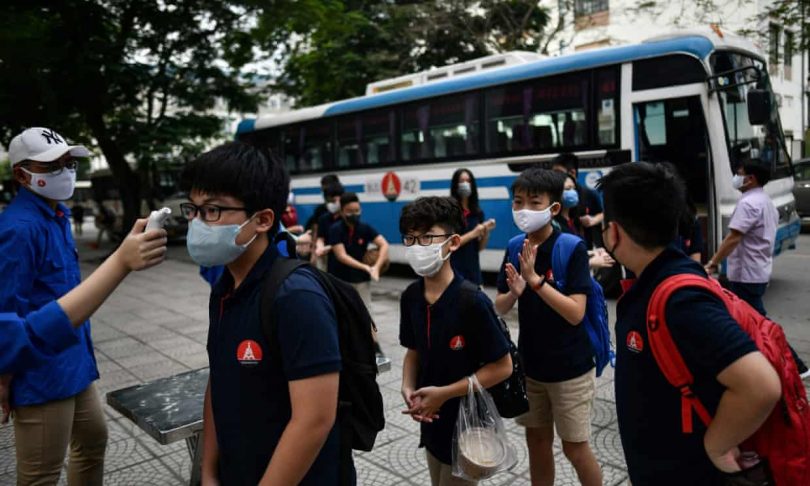 Strict quarantining and widespread testing have helped the country avoid disaster, but with tourism on hold the nation’s future is uncertain

Vietnam didn’t just flatten its coronavirus curve, it crushed it. No deaths have been reported, official case numbers have plateaued at just 271, and no community transmissions of the virus have been reported in the last two weeks. On 23 April, the nation eased lockdowns in its major cities and life is gradually returning to normal. It is a stark contrast to many other nations including the US, where more Americans have died from Covid-19 than during the entire Vietnam war.

Kidong Park, the World Health Organisation’s representative to Vietnam, has praised the country’s response to the crisis.

Quarantining tens of thousands in military-style camps and vigorous contact tracing procedures have helped Vietnam to avoid the disasters unfolding in Europe and the US. After testing over 213,000 people, the nation has the highest test-per-confirmed-case ratio of any country in the world. A creative public information campaign featuring viral handwashing songs and propaganda-style art helped, but it was decisive early action – hastened by a government praised for its response to Sars in 2003 – that proved most effective.

Vietnam’s first two confirmed cases of Covid-19 appeared in late January. On 1 February, Vietnam Airlines ceased all flights to China, Taiwan and Hong Kong and the border with China was shut days later. After a fresh wave of new infections in March, all international flights were grounded and a nationwide lockdown commenced on 1 April. While other nations announced lockdowns to deal with existing crises, Vietnam enacted one to prevent one.

Second waves of the virus have, however, already hit Japan and Hong Kong. To mitigate the risk of a fresh outbreak occurring in Vietnam, wearing face masks in public remains mandatory and gatherings of more than 30 individuals are banned, as are festivals, religious ceremonies and sporting events.

Park stresses the importance of education about the virus at community level, along with strengthening preventative measures in health facilities, offices, schools and other places where it is essential for people to go regularly.

But he warned of the economic consequences and this likely influenced the government’s decision to end the lockdown on 23 April.

Many non-essential services, such as bars and karaoke parlours, are still closed. Some will never recover. Constraints have been lifted for shops, hotels and restaurants, yet in a nation where tourism accounts for 6% of GDP, the future looks increasingly uncertain – especially when nobody has a clear idea of when borders will reopen.

A report released by the International Labour Organisation (ILO) last month said at least 10 million Vietnamese could lose their jobs or face reduced income in the second quarter of 2020. The International Monetary Fund (IMF) predicts a growth rate of 2.7% for Vietnam in 2020, a drop from around 7% last year.

In early April, the government announced a $2.5bn support package for Vietnam’s poor, with the most vulnerable receiving $76 per week. “Rice ATMs” and “zero dong stores” have been set up in major cities to assist those hardest hit, yet even when combined with additional government funding, such support only goes so far.

A Hanoi-based economist, Nguyen Van Trang, says the path ahead looks ominous. “Incredibly difficult decisions lie ahead on how and when to reopen the country…,” she says, but adds that despite external risks Vietnam has begun to restore manufacturing, services and retail sectors. “The internal resilience is huge. A large part of the population survived through hardships during the war, so they will be able to bounce back very quickly.”

For some of Vietnam’s most vulnerable, the situation looks bleak. With attention diverted towards the pandemic, NGOs have been hit hard. Blue Dragon Children’s Foundation, an organisation that works with street children in Hanoi and rescues victims of human trafficking from China, has seen donations plummet. Skye Maconachie, the organization’s joint chief executive, says the crisis has already led to an increase in homelessness and hunger.

“Many of the children and families we work with were already in poverty or in crisis, so now they are reaching a breaking point,” Maconachie says. “Traffickers prey on vulnerable people, so we expect to see an increase in human trafficking and labour exploitation over the coming months.”

Whatever the future holds, Vietnam, a nation of 96 million, appears to have contained the virus. As of Wednesday, Singapore had 19,410 confirmed cases of Covid-19 – the highest in south-east Asia – and 18 deaths, while Indonesia has more than 12,000 cases and 872 deaths. As Vietnam emerges from lockdown, the eyes of the world will be watching.

“The fight against Covid-19 is ongoing and the next wave is always possible as outbreaks are still reported globally.” Vietnam, Park says, “should not lose its grip.”