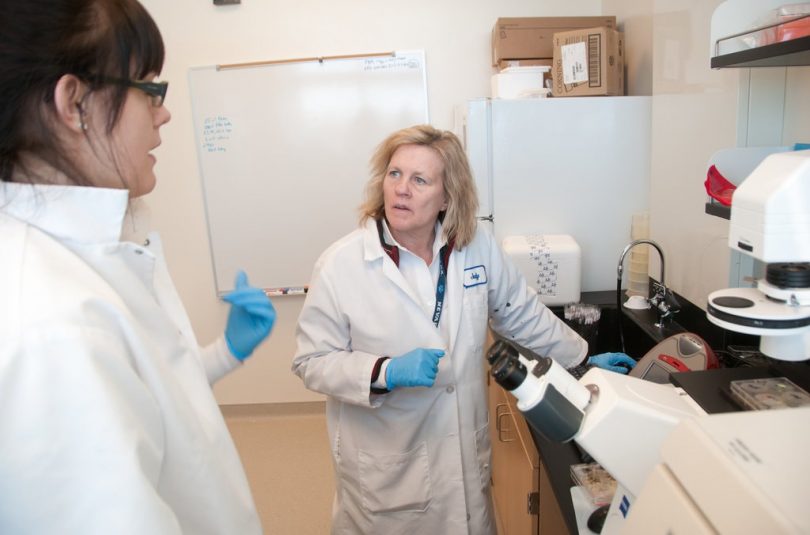 A video showcasing baseless arguments by Dr. Judy Mikovits, including attacks on Dr. Anthony Fauci, has been viewed more than eight million times in the past week.

In a video posted to YouTube on Monday, a woman animatedly described an unsubstantiated secret plot by global elites like Bill Gates and Dr. Anthony Fauci to use the coronavirus pandemic to profit and grab political power.

In the 26-minute video, the woman asserted how Dr. Fauci, the director of the National Institute of Allergy and Infectious Diseases and a leading voice on the coronavirus, had buried her research about how vaccines can damage people’s immune systems. It is those weakened immune systems, she declared, that have made people susceptible to illnesses like Covid-19.

The video, a scene from a longer dubious documentary called “Plandemic,” was quickly seized upon by anti-vaccinators, the conspiracy group QAnon and activists from the Reopen America movement, generating more than eight million views. And it has turned the woman — Dr. Judy Mikovits, 62, a discredited scientist — into a new star of virus disinformation.

Her ascent was powered not only by the YouTube video but also by a book that she published in April, “Plague of Corruption,” which frames Dr. Mikovits as a truth-teller fighting deception in science. In recent weeks, she has become a darling of far-right publications like The Epoch Times and The Gateway Pundit. Mentions of her on social media and television have spiked to as high as 14,000 a day, according to the media insights company Zignal Labs.

The rise of Dr. Mikovits is the latest twist in the virus disinformation wars, which have swelled throughout the pandemic. Conspiracy theorists have used the uncertainty and fear around the disease to mint many villains. Those include Dr. Fauci after he appeared to slight President Trump and Mr. Gates, a co-founder of Microsoft, as someone who started the disease. They have also pushed the baseless idea that 5G wireless waves can help cause the disease.

On the flip side, they have created their own heroes, like Dr. Mikovits.

The conspiracy theorists “recast a pusher of discredited pseudoscience as a whistle-blowing counterpoint to real expertise,” said Renee DiResta, a disinformation researcher at the Stanford Internet Observatory.

Dr. Mikovits did not respond to requests for comment.

Judy Mikovits has a degree in biology from the University of Virginia and a Ph.D. in molecular biology from George Washington University. From 1992 to 2001, she worked at the National Cancer Institute as a postdoctoral fellow, a staff scientist and a lab director, then served as research director of the Whittemore Peterson Institute for Neuro-Immune Disease from 2006 to 2011. In 2011, after her research into chronic fatigue syndrome was discredited, she was fired from Whittemore.

Dr. Mikovits’s rise to internet notoriety has been sudden. According to data from Zignal Labs, she was rarely mentioned on social media platforms in February.

By April, coverage of Dr. Mikovits rose to 800 mentions a day. That month, Darla Shine, the wife of Bill Shine, a former Fox News executive and former top aide to Mr. Trump, promoted Dr. Mikovits’s book in a tweet. Videos by The Epoch Times, a publication with ties to the Falun Gong, and the conservative outlet “The Next News Network” interviewed Dr. Mikovits about the pandemic, generating more than 1.5 million views on social networks.

Then came the video from “Plandemic,” which made mentions of Dr. Mikovits on social media spike far higher. The video was produced by Mikki Willis, who was involved in making “Bernie or Bust” and “Never Hillary” videos during the 2016 presidential campaign.

Her arguments also began to spill over into the real world, including her baseless assertion that “wearing the mask literally activates your own virus.” There is no evidence that wearing a mask can activate viruses and make people sick. On Thursday in Sacramento, Calif., a woman brandished a sign in front of the state Capitol building that read, “Do you know who Dr. Judy Mikovits is? Then don’t tell me I need a silly mask.”

YouTube and Facebook have removed the “Plandemic” scene, saying that it spread inaccurate information about Covid-19 that could be harmful to the public. But the video continues to circulate, as people post new copies. Twitter added an “unsafe” warning on at least one link featuring Dr. Mikovits on the social network, and blocked the hashtags #PlagueOfCorruption and #Plandemicmovie from trends and search.

Dr. Mikovits has attacked Dr. Fauci online since at least 2018. But her claims did not gain much traction until this year, when the narrative that Dr. Fauci was secretly plotting to undermine and discredit the president started spreading.

Dr. Mikovits says Dr. Fauci’s attacks on her work date back to the 1980s, when she contributed research to the National Cancer Institute as a graduate student. In the video being shared, Dr. Mikovits alleges that Dr. Fauci intercepted her research on H.I.V. to make money off patents, threatened her and then took undeserved credit for moving the field of H.I.V. treatment forward.

She also ties her professional downfall to Dr. Fauci. In 2009, Dr. Mikovits published research in the journal Science claiming to show that a mouse retrovirus caused chronic fatigue syndrome and other illnesses. That research gained significant media attention, but it was discredited a couple of years later, including with a retraction by the journal. Dr. Mikovits was briefly jailed in California on charges of theft made by Whittemore. The charges were later dropped.

Dr. Mikovits has sought to reframe the scandal as part of a broader campaign of persecution, aimed at silencing her work questioning the safety of vaccines.

There is no evidence that Dr. Fauci and Dr. Mikovits interacted. This week, in a statement to the fact-checking website Snopes, Dr. Fauci denied ever having threatened Dr. Mikovits. “I have no idea what she is talking about,” he wrote.

In a statement, the agency said, “The National Institutes of Health and National Institute of Allergy and Infectious Diseases are focused on critical research aimed at ending the Covid-19 pandemic and preventing further deaths. We are not engaging in tactics by some seeking to derail our efforts.”

Dr. Ian Lipkin, the director of the Center for Infection and Immunity at Columbia University, said in an interview on Saturday morning that Dr. Fauci had asked him in 2011 to design a study that would address whether Dr. Mikovits and others could reproduce her research showing an association between XMRV, the mouse retrovirus, and chronic fatigue syndrome. He pointed to a September 2012 news conference at Columbia in which Dr. Mikovits admitted the link her original research had made between the mouse retrovirus and chronic fatigue syndrome was “simply not there.”

“Now is the time to use” the invalidating results that came out of the effort to reproduce her research “and move forward,” Dr. Mikovits said at the time. “And that’s what science is all about.”

Ivan Oransky, a co-founder of the academic watchdog Retraction Watch, which has followed Dr. Mikovits’s work closely, said that when he sees videos like the one posted in the past week, “they tend to coalesce around certain kinds of subjects, then the trajectory turns to martyrhood really quickly.”

There is some evidence that prominent members of conspiracy groups have tried to give her name and her story a lift online.

A day before the GoFundMe campaign began, a newly created account for Dr. Mikovits tweeted for the first time. “A big thanks goes out to Zach Vorhies (@Perpetualmaniac) for helping me get on Twitter!” It was retweeted 400 times and liked more than 2,200 times. The account has gained over 111,000 followers in less than a month.

GoFundMe removed the page on Friday, stating that the campaign violated the website’s terms of service for “campaigns that are fraudulent, misleading, inaccurate, dishonest, or impossible.”

Mr. Vorhies did not respond to requests for comment.

Dr. Mikovits’s newfound notoriety has also lifted sales of her new book. This week, “Plague of Corruption” shot to No. 1 on Amazon’s print best-seller list. The book was out of stock on Friday. Amazon said that the book did not violate the company’s content guidelines.

Skyhorse, the independent publishing company behind the book, defended its decision to print Dr. Mikovits. “The world should discuss the ideas in this book, rather than allow censorship to prevail,” a spokeswoman for Skyhorse said.

Dr. Peter J. Hotez, dean of the National School of Tropical Medicine at Baylor College of Medicine, said her rise illustrated how the anti-vaccination movement had “taken a new ominous twist” with the coronavirus.

“They’ve now aligned themselves with far-right groups,” Dr. Hotez said, “and their weapons of choice are YouTube, Facebook and Amazon.”