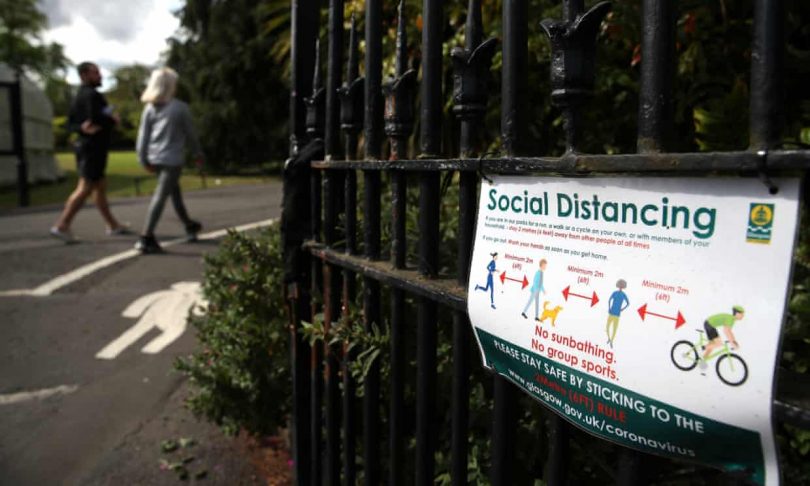 A Syrian man has been found dead in a Glasgow guesthouse after outreach workers raised significant concerns about the spiralling mental distress of hundreds of asylum seekers who were moved en masse into hotels at the beginning of lockdown.

The man, who was 30 and had been living in Glasgow for the past six months while he completed his asylum application, was found dead in his room at McLay’s Guest House in the city centre on 5 May. A postmortem will take place to establish the cause of death, but a friend said the man had been experiencing suicidal thoughts for several weeks.

Last month the Guardian reported that more than 300 asylum seekers housed in the city – the UK’s largest dispersal area – had been given less than an hour’s notice to pack up their flats before being moved into city centre hotels, where they claimed physical distancing was “impossible”. In a move condemned by campaigners, they also had all financial support withdrawn.

The private housing provider Mears, which is subcontracted by the Home Office, moved them from mainly self-contained apartments into hotels where residents and campaigners describe continuing difficulties with maintaining physical distancing.

Mears said people were being “safely and appropriately” housed in accordance with health authority guidance, while a Home Office spokesperson said it was “totally incorrect” to suggest that there were problems with physical distancing.

Since then, outreach workers have identified increasing fear, stress and anxiety among this vulnerable population, who have no information about future housing arrangements and no money to top up their phones to continue communication with lawyers, or buy extra food, hand sanitiser or period products for women.

A friend of the dead man said that since the move into the guesthouse, he had spoken of worsening flashbacks to torture he had experienced on his journey through Libya to the UK.

Ako Zada, the director of Community InfoSource, an asylum housing charity, has been visiting hotel residents regularly. He said: “I’ve been shocked to see people so mentally unwell. They are worried about cleaning of shared areas, and they don’t know when they will be moving again because they keep getting told different stories.”

Hotel residents have complained about the quality of food provided, the fact that windows cannot be opened, as well as the psychological isolation. A number of hotel workers have also contacted the Guardian to raise concerns about large numbers of asylum seekers congregating in enclosed areas.

Robina Qureshi of Positive Action in Housing said the “hotel asylum seekers” were being treated as “less than human”. “Many people, men and women are suffering from severe mental health conditions. The fact that Mears and the Home Office see fit to dump hundreds of people in hotels where there is no social distancing, people cannot keep their personal environment aired or hygienic, and have had their meagre card payment of £35 a week cut to £0 deserves further investigation.”

Sabir Zazai, the chief executive of the Scottish Refugee Council, said: “This tragic death must be a chilling reminder of the chronic vulnerabilities of those going through the complexities of the asylum system.”

A Mears spokesperson said: “We are deeply sad to confirm the death of an asylum – seeker who had been in Mears-supported accommodation. Mears are working with the Home Office to contact the asylum seeker’s family before disclosing more information.”

A home office spokesperson said: “We are aware of an incident resulting in an individual sadly losing his life. It would be inappropriate to comment before all of the facts have been established and his family have been notified.”