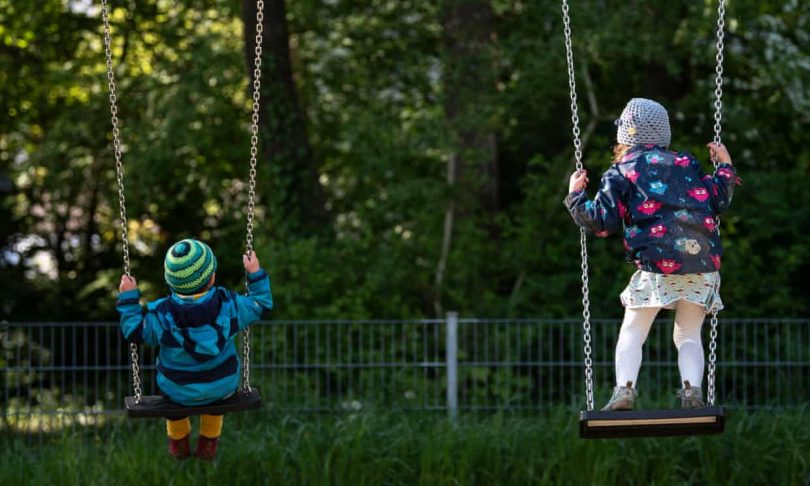 As countries look to ease school and play restrictions, what evidence is there that children react differently?

How many children are being infected with Covid-19?
Children represent just a small fraction of confirmed Covid-19 cases, with fewer than 2% of reported infections in China, Italy and the United States being in people under 18 years old and with under-18s accounted for fewer than 2% of hospital admissions with Covid-19 in the UK.

Does this mean children are less susceptible?
There is now a wealth of evidence that children generally experience milder symptoms when they are infected – although there have been rare cases of children becoming seriously ill or even dying. However, it is not yet clear whether they have a lower chance of catching Covid-19. Although fewer children have been picked up in national testing programmes, this could be due to fewer being tested. During the early phase of the epidemic in Europe, adult travellers played a dominant role in seeding infections, which also meant, purely for circumstantial reasons, that children would have played a less significant role in spreading infections.

Studies on this question give a mixed picture. One analysis, in the Lancet Infectious Diseases, of households with confirmed Covid-19 in Shenzhen, China, found that children younger than ten were just as likely as adults to get infected. However, there is other evidence from South Korea, Italy and Iceland suggesting lower infection rates among children. Some of the difference could also be down to differences in social mixing.

Why do children react differently to adults?
For many infectious diseases, there is a U-shaped risk curve, with the youngest and oldest in society being most vulnerable. Covid-19 does not follow this pattern – even toddlers and newborn babies typically only experience mild symptoms. One theory is that children’s lungs might contain fewer of the ACE2 receptors that the virus uses to enter cells. To confirm this, researchers would need to study tissue samples from children. Another possibility is that children’s immune systems respond in a more optimal way to the virus – mounting a strong enough response to get rid of the infection, but without going into overdrive and flooding the body with inflammatory proteins, which are known to sometimes cause problems in adult patients.

Are children invisible transmitters?
Asymptomatic transmission is known to play an important role in the spread of Covid-19 – studies have shown that in general people appear to be at their most infectious in the day or so before symptoms start. This raises the question of whether children are silent spreaders of the virus. A recent German study, which compared the viral load of nearly 4,000 people aged from one to 100 years old, added weight to this idea. It found that regardless of age, people appeared to shed a similar level of virus, suggesting they could be equally infectious. However, a caveat is that the study did not measure real-life transmission in children. As schools reopen and community transmission is tracked closely in some European countries, a clearer answer on this is likely to emerge in the coming months.