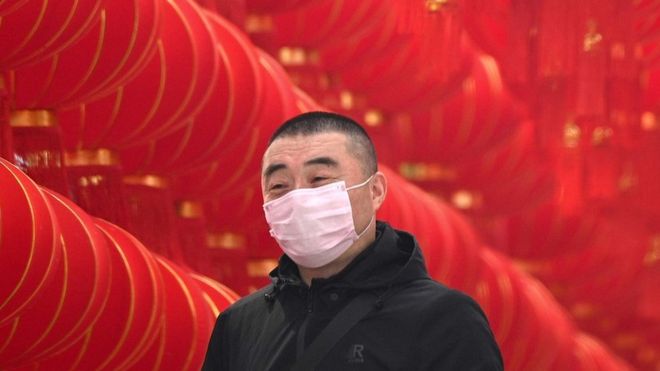 Step outside your door without a face mask in Hong Kong, Seoul or Tokyo, and you may well get a disapproving look.

In recent weeks, many European nations have issued advisories to wear a mask in certain public settings, and in England the latest advice is to wear a face covering in “enclosed spaces where social distancing is not always possible”, such as public transport and some shops.

Several US states have also given similar advice, and even the White House now makes it compulsory for all staff to wear face masks – though President Donald Trump still refuses to wear one.

Many people are still not wearing masks despite official advice though, and some governments remain unconvinced about the science.

Why some people embrace masks while others shun them is not just about government directives and medical advice – it’s also about culture and history, a debate over evidence, and even about personal liberties.

The official word on face masks

Nobody else needs to wear a mask, and experts have given several reasons for that.

One is that a mask is not seen as reliable protection as other methods, given that current research shows the virus is spread by droplets and contact with contaminated surfaces. So it could protect you, but only in certain situations such as when you’re in close quarters with others where someone infected might sneeze or cough near your face. This is why experts say frequent hand washing with soap and water is far more effective.

Removing a mask requires special attention to avoid hand contamination, and it could also breed a false sense of security where you end up ignoring or forgetting to practice good hygiene.

Yet in some parts of Asia everyone wears a mask by default – it is seen as safer and more considerate.

In mainland China, Hong Kong, Japan, South Korea, Thailand and Taiwan, the broad assumption is that anyone could be a carrier of the virus, even healthy people. So in the spirit of solidarity, you need to protect others from yourself.

Some places take this idea very seriously: in some parts of China, you could be arrested or punished for not wearing a mask. In Singapore, which used to discourage citizens from wearing masks, it’s now compulsory to wear one outside or risk a fine of S$300 (£170, $210).

Meanwhile in Indonesia and the Philippines, where there are suspicions that there are many under-reported cases, most people in major cities wear masks to protect themselves from others.

For many of these countries, mask-wearing was a cultural norm even before the coronavirus outbreak. They’ve even become fashion statements – at one point Hello Kitty face masks were all the rage in the street markets of Hong Kong.

In East Asia, many people are used to wearing masks when they are sick or when it’s hay fever season, because it’s considered impolite to be sneezing or coughing openly. 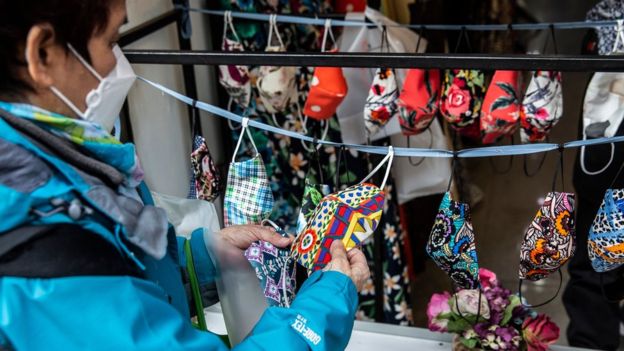 In Hong Kong, you can buy different designs of masks

The 2003 Sars virus outbreak, which affected several countries in the region, also drove home the importance of wearing masks, particularly in Hong Kong, where many died as a result of the virus. So one key difference between these societies and Western ones, is that they have experienced contagion before – and the memories are still fresh and painful.

In some parts of Asia, seasonal air pollution or heavy traffic pollution in crowded cities have also made it pretty normal for people to wear masks outside.

The mask as a social nudge

Some argue that ubiquitous mask wearing, as a very visual reminder of the dangers of the virus, could actually act as a “behavioural nudge” to you and others for overall better personal hygiene.

“Putting on a mask every day before you go out is like a ritual, like putting on a uniform, and in ritual behaviour you feel you have to live up to what the uniform stands for, which is more hygienic behaviour like not touching your face or avoiding crowded places and social distancing,” said Donald Low, a behavioural economist and professor at the Hong Kong University of Science and Technology. 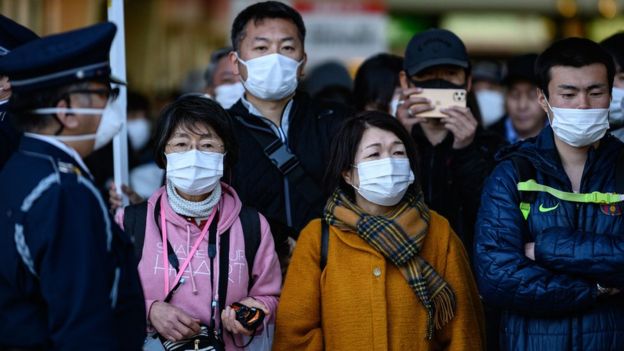 Can wearing a mask act as a daily reminder to yourself and others to practise better hygiene?

Then, there’s the idea that every little bit counts in the war the world is waging against the virus.

“We can’t say if face masks are ineffective, but we presume they have some effect because that’s the protection we give to healthcare workers,” said Benjamin Cowling, an epidemiologist with Hong Kong University.

“If face masks are used on a lot of people in crowded areas, I think it would have some effect on public transmission, and at the moment we’re looking for every small measure we can to reduce transmission – it adds up.”

But there are down sides of course. Some places such as Japan, Indonesia and Thailand have faced shortages, and South Korea has had to ration out surgical masks.

There is the fear that people may end up re-using disposable masks, which is unhygienic, or use inferior masks sold on the black market. Japan and Singapore have since given out reusable masks to its citizens.

People who do not wear masks in these places have also been stigmatised, to the point that they are shunned and blocked from shops and buildings.

In Hong Kong, some tabloids have splashed pictures on their covers of Westerners not wearing masks and congregating in groups in the city’s nightlife district, and criticised expatriates and tourists for not taking enough precautions.

But the discrimination works both ways.

I'm so tired of being harassed for wearing masks in the US. I wore a mask on my way to work today. One man walked up and coughed loudly at me. A few minutes later, another man aggressively approached me&asked: "r u a nurse?" I'm no nurse. I just know what's coming for all of us.

In places where mask wearing is still not the norm despite government advisories, those who do wear masks have been shunned or even attacked. It hasn’t helped that many of these mask wearers are Asians.

In the US, it’s become an issue of personal freedoms, with some arguing that making everyone wear face masks infringes on civil liberties. The city of Stillwater in Oklahoma was forced to soften a mask law to an advisory after threats of violence, while a Michigan security guard was killed after he barred a shopper who didn’t have a mask from entering a store.

But those societies that do advocate everyone wearing a mask may have a point and increasingly, experts are now questioning the official WHO advice.

Firstly, there is some emerging evidence that there are more “silent carriers”, or healthy people with the virus who show little or no symptoms, than experts initially thought.

In China, it is estimated that a third of all positive cases show no symptoms, according to classified Chinese government data seen by the South China Morning Post.

On the Diamond Princess, the cruise ship that docked in Yokohama, about half of the more than 600 positive cases found onboard were found to have no symptoms. A similar proportion of asymptomatic cases has been reported in Iceland. 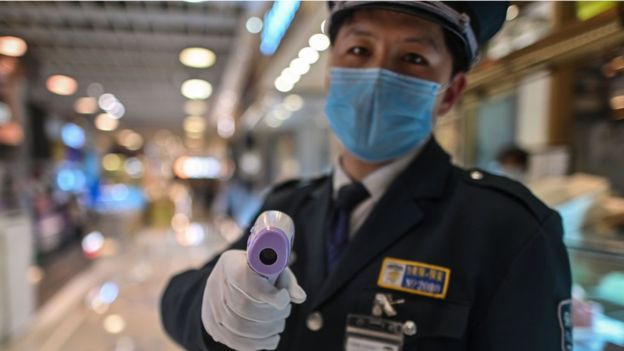 In Wuhan and Guangzhou, Chinese authorities have said those not wearing masks could face arrest

The prevailing belief has been that because these people do not exhibit symptoms, they are not very contagious. But some are questioning this now.

A recently published study of cases in China found that “undocumented cases of infection”, or those with either mild or no symptoms, were significantly contagious and could have been responsible for nearly 80% of positive virus cases.

Meanwhile a Hong Kong study estimates that up to 44% of virus transmission from an infected person can happen before that person starts showing any symptoms.

So does that mean if everyone wore a mask, these silent carriers wouldn’t turn into spreaders?

The jury is still out on this issue, with various studies proving and disproving the effectiveness of a mask in stopping transmission of the coronavirus. This is why some places have so far held back from mask laws and advisories, such as New Zealand which successfully controlled its outbreak and is holding back on advising citizens to wear masks because of the lack of scientific consensus and clinical trials.

Research is ongoing, and future studies will no doubt add nuance to the overall picture.

The face mask may be a product of recent history, experience with contagion, and cultural norm. But as this pandemic evolves, along with evidence and research, our behaviour may change again.