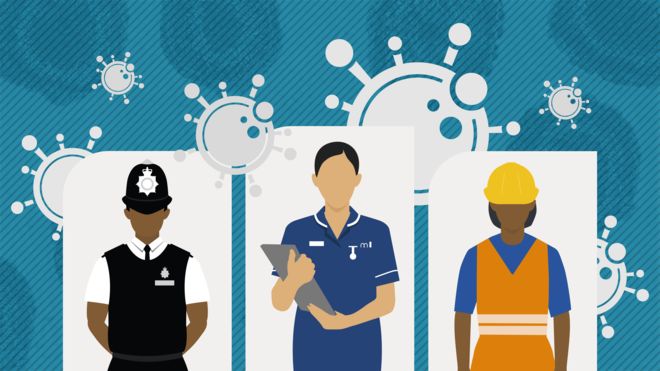 Millions of workers are doing their day jobs from makeshift set-ups in their living rooms and kitchens, while those in England who can’t work from home are now encouraged to go back in if they can do so safely.

But how exposed to coronavirus might you be in your job? And how does that compare to others?

Data from the UK’s Office for National Statistics, based on a US survey, puts into context the risk of exposure to disease, as well as the amount of close human contact workers had before social distancing and other safety measures were introduced.

While most jobs require people to work relatively closely to others – somewhere in the range between arm’s length and a shared office environment – there are very few that typically involve exposure to disease more than once a year.

It’s important to note that the data on both exposure to disease at work and how close people are to others is based on interviews that took place with US workers before the pandemic broke out and social distancing recommendations were introduced.

Some jobs may find it easier to adjust than others and there may be slightly different working practices and conditions in the US for certain occupations. The results can be expected to be broadly the same in most developed countries.

Almost all the jobs that have a high exposure to both disease and other people are healthcare professions, while those who scored low on both measures include artists, lawyers and those in more typical office jobs like marketing, HR and financial advisers.

Cleaners, prison officers and undertakers are among those who have relatively high exposure to disease without so much close interaction with other people.

But the people who might be most at risk to a new infectious disease like Covid-19, are those who have lots of close contact with people, but aren’t used to being exposed to disease.

Bar staff, hairdressers and actors fall into this category, as well as taxi drivers and bricklayers.

Other figures released by the ONS this week showed that deaths in the healthcare sector in the UK are no higher on average than those in the wider community, although social care workers were dying at higher rates. Given that these healthcare occupations are so exposed to both disease and other people, why have there not been more deaths?

This could be because workers in these jobs are more likely to be using personal protective equipment (PPE) like masks and gloves, says Ben Humberstone, deputy director for health analysis at the ONS. They also follow regular hygiene measures like washing hands.

One of the jobs which had many more coronavirus deaths than the average was taxi drivers. That’s a job which scores highly in terms of closeness to other people, particularly among those jobs which are still actually possible to do at the moment. Bar staff, hairdressers and fitness instructors all score higher, but with bars, gyms and hair salons shut, most of these people will be isolating.

As taxi drivers are less exposed to disease in normal times, there may not be an existing culture of regular hand-washing and wearing PPE. Some firms are trialling partition screens and distributing gloves and masks to protect their drivers and customers.

The data in the look-up comes from this release by the ONS.

The figures on proximity to others and exposure to disease come from a survey carried out by the Occupational Information Network (O*NET) in which they asked respondents in the US to place themselves on a 1-5 scale for the following two questions.

1. How physically close to other people are you when you perform your current job?

2. How often does your current job require you to be exposed to diseases or infection?

For the physical closeness question, one means the respondent works more than 100ft away from the nearest other person, while five means they need to touch or be near to touching other people at work. The survey was carried out before social distancing measures were introduced and workers in certain jobs will of course find it easier to adjust than others.

The responses for people in the same jobs were averaged together and extrapolated to form a score of 100. We’ve looked at these scores out of of 100 and given each job a ranking.

If any two jobs had the same score we’ve given them a tied ranking.