Breakneck triage nails many diagnoses, but deeper treatment is needed.

There has never been a harder time to be a political leader. The choices that must be made are enormous, the consequences potentially catastrophic, the science guiding those decisions uncertain — and there is no precedent. As a result, the COVID-19 pandemic has revealed some of the best and the worst in the world’s leaders: from opportunism and denial to compassion and clarity.

It’s a shame that policymakers did not have books such as Joshua Gans’s Economics in the Age of COVID-19 to lay out the issues for them in January. It is remarkable that they do already. Gans completed this book at breakneck speed, by late March. His attempt to explain the economic thinking that should guide policy is useful, but inevitably limited. With the situation and knowledge changing daily, unfurling events will always render some aspects of such an analysis obsolete. In this sense, Gans, an economist at the University of Toronto in Canada, has taken a brave shot at an impossible task. Ultimately, economic thinking will need wider horizons.

The crisis has forced some politicians, especially on the right, to go against deeply held inclinations by implementing interventions and financial handouts that, in normal times, even most of their opponents would deem excessive. Countries have tried to freeze their economies and prop up the absence of liquidity and wages with eye-watering subsidies until the wheels start turning again.

Therein lies the difference from the oft-cited comparison with wartime economics. In that situation, activity continues, but redirected. The present worldwide lockdowns have drastically shrunk the workforce. Aside from essential workers — in health, care, food and transport, say — only those jobs that can be done alone from home can safely continue (never have I felt luckier to be a writer). This has sometimes been presented, too simplistically, as creating a choice between saving lives or saving the economy. As many countries have now passed the (first?) peak of infections, discussion has turned to the dangers to health posed by an economy left too long in stasis.

That discussion needs to happen, but it risks becoming facile, too. Presenting lives versus livelihoods as a dichotomy is used in defence of leaders who hesitated to impose a lockdown. That, Gans shows, is mistaken. The highly infectious nature and the fatality rate of COVID-19, which were both clear early on, even if exact numbers were not, meant there was never a gradual trade-off to be had: a dash more economy at the price of a few more deaths. “If you know you are going to shut down the country eventually, there are huge returns to doing it quickly,” Gans writes. It is the only way to keep choices open as more is learnt about the virus and its spread.

This is not hindsight: Gans was writing while the UK and US governments were procrastinating. Nor is it just about saving lives in the short term. “Pursuing public health can be consistent with superior long-run economic performance,” Gans writes.

And to be effective, that decision to shutter must be made with “resolve, clarity [and] transparency”. If leaders downplay the enormity of the crisis, prevaricate or issue weak behavioural guidelines — rather than expectations with consequences — then individuals will “do as they often do and pursue their own interest”, and will “keep businesses open and keep engaging in social life”.

Then there’s the question of how to manage the crisis in an economy on pause. Again, ideology might clash with reality. If you urgently need masks or ventilators, then there’s no time to put it out to tender and let market mechanisms make the choices about who gets the contract and the product. There must be centralized decision-making and allocation, even if that risks a degree of ‘inefficiency’. 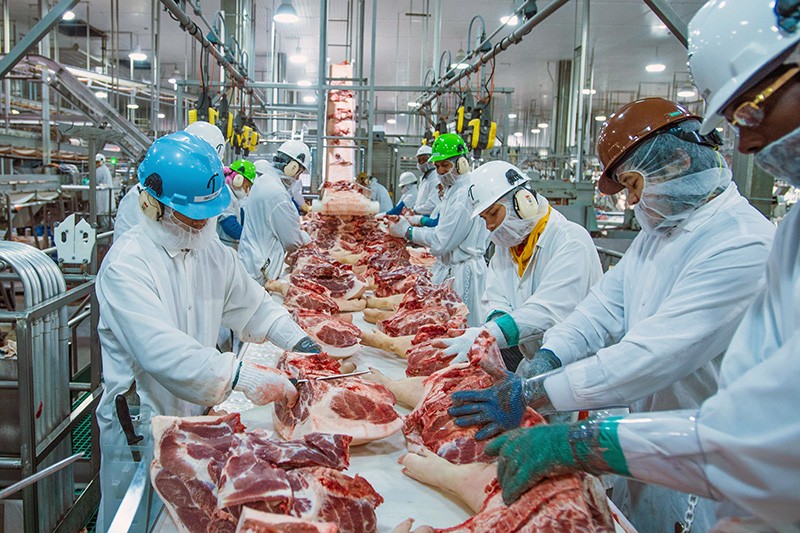 There has been a surge in COVID-19 cases in meatpackers in the United States.

And how do you keep the economy in suspended animation, without the onset of necrosis? Governments have generally realized that they must help to cover lost wages, but the details are very tricky. The options of providing financial assistance to cover bills, such as rent and mortgages, suspending those costs or covering them directly are not equivalent. Gans says that the aim must be for payments, subsidies and loans to “ensure that people’s short-term disruptions are not translated into long-term breakups”. One solution, he suggests, is repayment of government loans over time through taxation.

Is the past any guide? Gans touches on the only comparable event in recent times, the 1918 influenza pandemic. The economic consequences of that were complicated because it occurred directly after a global war (mobilization of troops exacerbated that outbreak). Gans might also have mentioned the AIDS epidemic in Africa, which has in some regions been devastating enough to orphan generations, deplete the workforce and hamper economic development. Prioritizing the economy over health is not necessarily taking the long view.

Gans does a good job fleshing out the requirements for an exit strategy. He says we now need to “invest in the testing economy”, for example to establish who can safely return to work and to monitor workplace safety. “Countries and regions that were able to test, trace, and then isolate the infected were able to contain the virus quickly and reopen their economies sooner”, he points out — in a ringing endorsement of World Health Organization policy. Even with a vaccine, he says, testing is likely to be a part of our daily lives for many years.

He also offers a useful discussion of how to optimally allocate a vaccine when it has not been produced in sufficient quantities for all (although he does not go into the issue of people refusing it, which is likely to be a problem). And he considers how innovation in vaccine development can be motivated without reliance on market forces and patenting of what is so clearly a global public good. There is previous discussion he might have drawn on here about the development of urgently needed drugs and treatments that seem unlikely to generate profits for pharmaceutical companies, such as new antibiotics and treatments for tuberculosis.

As others have done after previous outbreaks, Gans advocates establishing a pan-national institution with a “set of resources to contain future pandemics and ensure an international, harmonized response”. More like the International Monetary Fund than the WHO in his vision, this would focus not just on drugs but also on innovations to enhance protection from infection at work and on public transport. He calls “hundreds of billions of dollars per year to mitigate substantially the risk of global pandemics” a no-brainer, echoing those after the first Ebola outbreak who drew parallels with defence spending.

Here, the book stops short. Realistically, Gan’s word was always going to be the first, not the last. But he paints a picture of a post-COVID-19 world that is largely back to normal, with some inconveniences. The truth is that the pandemic throws much more into question. Whatever landscape emerges, it is unlikely to be same as that at the end of 2019.

There is a moral case for rethinking inequalities in light of what we have learnt about who is truly essential for society’s functioning. Some aspects of neoliberal economic policy are fundamentally in conflict with the needs of a fragile world, with greater risks to come. The behaviour of some leaders has pointed out the dangers of an information economy that has become a ‘marketplace for truth’. And economics itself must incorporate the revision of past preconceptions and habits that will be demanded of the rest of us.