The Chinese city’s goal is unrivaled in scale. But a top expert has questioned the need for it, given the low number of infections.

Wuhan, the Chinese city where the coronavirus pandemic began, has announced an ambitious plan to test all of its 11 million residents for the virus in the coming days, a campaign that will be closely watched by governments elsewhere.

The testing drive, which is likely to require the mobilization of thousands of medical and other workers, shows the ruling Communist Party’s resolve to prevent a second wave of infections as it tries to restart China’s economy. The plan was announced this week after Wuhan reported six coronavirus cases, breaking a streak of more than a month without any new confirmed infections.

The city’s goal of testing every resident is unrivaled in scale, and in the speed at which Wuhan apparently plans to carry it out.

Some countries, like South Korea and Germany, have aggressively tested and traced infections, albeit at much lower levels than Wuhan is attempting. In the United States, the rate of testing is still far short of the three to five million tests per week that experts say will be necessary to safely reopen the country.

Such comprehensive testing poses challenges. It is unclear how Wuhan will procure enough testing kits and process all the samples, and whether such a broad, systematic approach is the best use of resources when the city’s infections are low.

Here’s what we know about the plan so far. Early reports had suggested that Wuhan was planning to test all 11 million residents in less than two weeks, citing a government notice that called it a “10-day battle.”

But even state media reports acknowledged the difficulty of that task. The official Health Daily newspaper said in a report on Thursday that Wuhan’s authorities would have to conduct at least 730,000 tests a day to finish within 10 days, even after excluding people who had already been recently tested.

That is several times the current testing capacity in Wuhan, which the paper said could conduct 100,000 tests a day under extreme circumstances. By comparison, South Korea was testing 20,000 people a day at 633 sites nationwide in March, just after its outbreak had peaked. At that rate, it would take about a year and a half to test 11 million people.

An employee who answered the phone at a hotline set up by Wuhan’s mayor said the tests would be carried out in a staggered manner. Some neighborhoods would start earlier than others, but each would plan to finish testing its residents within 10 days, this person said.

Wuhan, by far the hardest-hit Chinese city, has reported more than 50,000 infections and 3,800 deaths since the outbreak started. One major goal of testing would be to identify infected people with no symptoms, who can still spread the virus.

According to government notices distributed on social media, at least seven neighborhoods in Wuhan said testing would start on Wednesday.

“A nucleic acid test is your responsibility to yourself, your family and society,” read a post from the Changqing Garden No. 2 Neighborhood District Committee. “Please support and cooperate.” 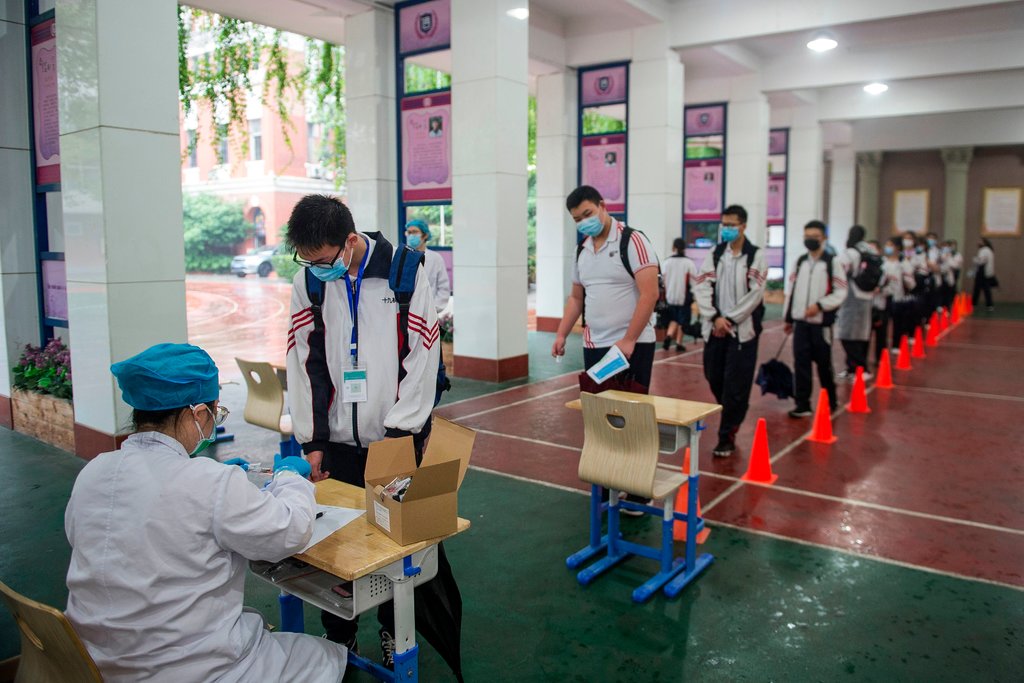 Students lined up to give swab samples at a Wuhan school on Thursday.

Lines form as officials say, ‘Leave no one behind.’

Organizers of the drive have distributed fliers and made announcements on loudspeakers and social media urging residents to register for testing slots in their neighborhoods.

In areas where the drive has started, officials have erected rows of tents and set up folding tables and stools. Social media posts on Wednesday showed dozens of residents lining up to have nasal or throat swabs taken by medical workers wearing safety goggles and protective suits.

District notices shared on social media urged residents to keep a distance from one another and to spread the word about the testing, in order to “leave no one behind.”

The government said it would prioritize residential compounds with older residents, densely populated communities and neighborhoods with rural migrants. People who have been tested within the past week do not need to be tested again. Children under the age of 6 are exempted, some notices said.

Some confusion remains. One hospital, Wuhan First, received so many calls from people asking if one member of each family could be tested, rather than the entire family, that state media published an interview with hospital officials explaining why some family members could be sick while others were healthy.

An official in one neighborhood told the magazine Caixin that he did not know whether to send all residents in his district to the hospital or invite doctors to come to the neighborhood. 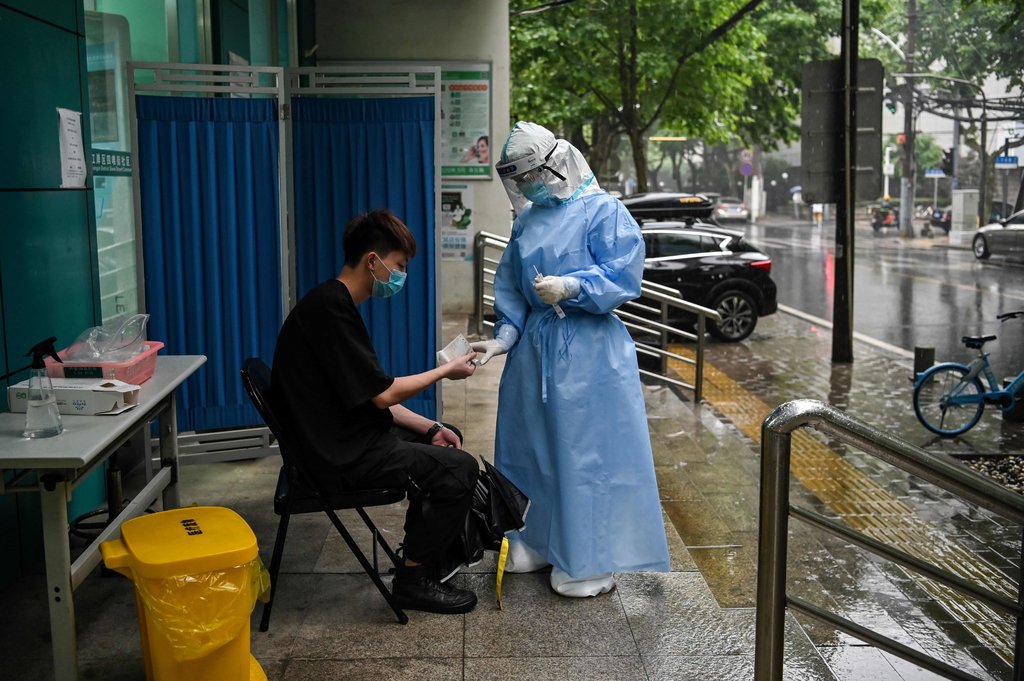 Preparing for a test in Wuhan on Thursday.

Companies are rushing to meet the sudden demand.

Zhang Zheren, an official at a testing lab called Adicon Clinical Laboratories, told Caixin that her company planned to ship equipment from the eastern city of Hangzhou to Wuhan. She expected to increase her company’s testing capacity tenfold, she said.

Wuhan’s deputy mayor, Li Qiang, said last month that there were 53 facilities in the city that together could handle a daily average of 46,000 coronavirus tests.

The employee at the mayor’s hotline said residents would typically be able to receive the results of their tests within 48 hours. 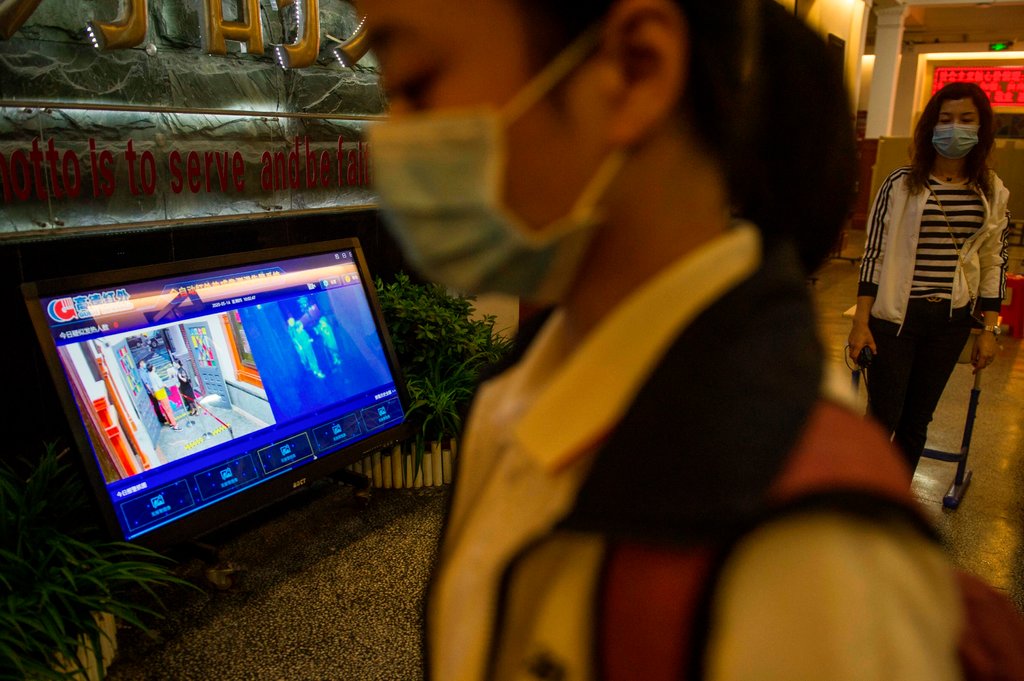 Thermal scanning at a Wuhan school on Thursday.

In the early weeks of the outbreak in Wuhan, many residents struggled to get tested because of a shortage of kits.

Now, testing is widely available around the country. Many companies are arranging for their staff to get tested before they resume work. Hundreds of hospitals and clinics are able to test people, and labs can process the results more quickly.

Even before Wuhan launched its mass testing drive, the government covered nearly the full cost of a test under its basic medical insurance scheme.

This time, Wuhan residents need not pay at all, according to local government notices and Chinese media reports. The Health Daily article said testing was free and that the cost of the drive — which it estimated would exceed 1 billion yuan, or around $140 million — would likely be borne by the city. 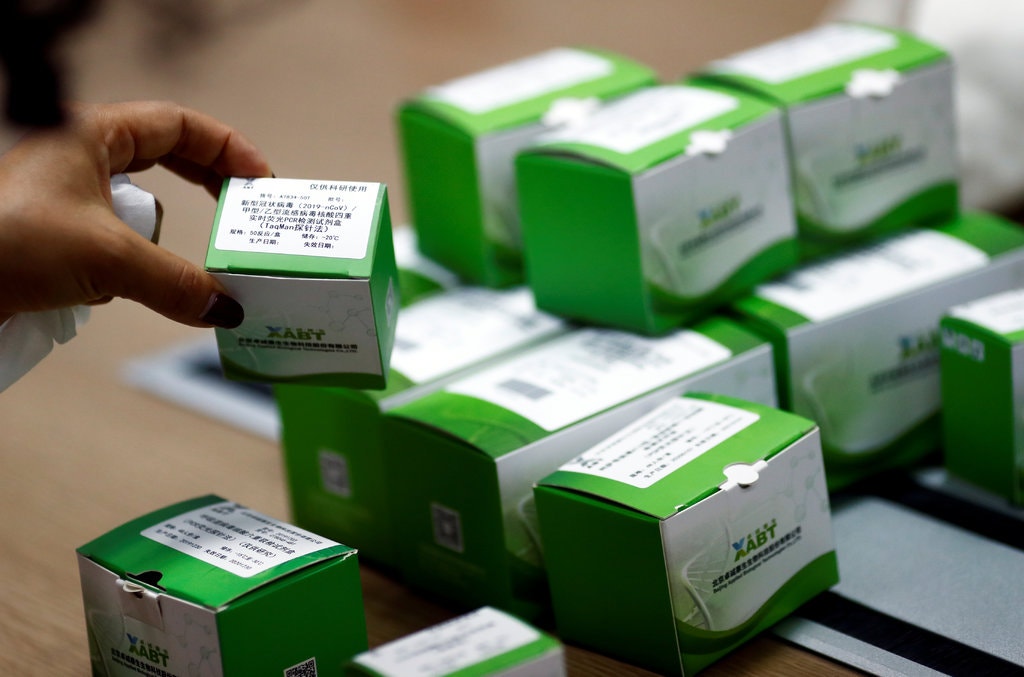 But at least one expert thinks this is overkill.

While some residents have been supportive, others are concerned or angry about being asked to join long lines outdoors and risk becoming infected. Even though the lockdown in Wuhan has lifted, many residents have still chosen to stay home as much as possible.

One senior expert said it was unnecessary to test every resident in Wuhan, given the low number of cases in the city.

When asked about Wuhan’s new infections, Wu Zunyou, the chief epidemiologist of China’s Center for Disease Control and Prevention, said in an interview with state television on Tuesday that large-scale testing should focus on “key areas and key groups.”

“In communities without infections, there is no need to screen everyone,” Dr. Wu said.