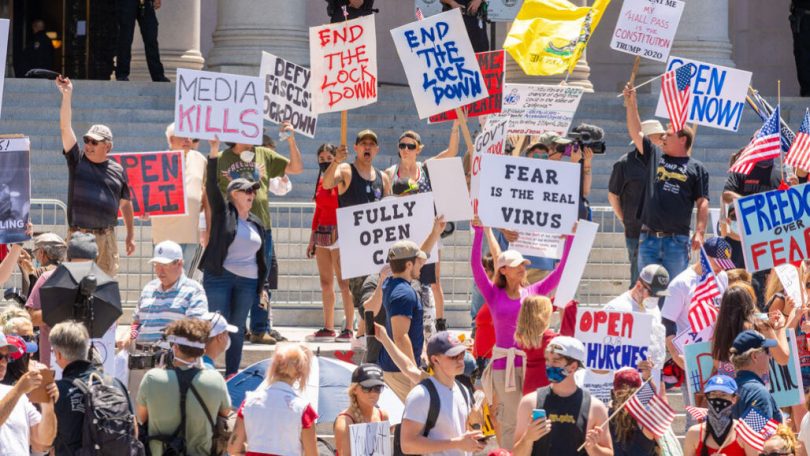 Even as cases of COVID-19 continue to rise in many places, some U.S. states are starting to relax social distancing guidelines. With public health experts often disagreeing with politicians pushing for reopening, in many cases individuals may decide for themselves when and how to return to society.

To be clear, for many people, the decision to re-enter society isn’t much of a choice. As states reopen businesses, furloughed workers no longer eligible for unemployment are returning to work for a paycheck. The public overall remains wary of frequenting businesses, with 44 percent saying they would be uncomfortable visiting a grocery store and 78 percent saying they would be uncomfortable eating at a restaurant, according to a Washington Post–University of Maryland poll released earlier this month. Those numbers break down along partisan lines, with Republicans more comfortable than Democrats with increased social interaction. For instance, just 10 percent of Democrats said they would be comfortable eating out at a restaurant compared with 36 percent of Republicans.

Some of the partisan divide could come down to emotions. People who respond to threats with anger, for instance, tend to downplay risks and resist risk-reduction policies — sentiments that have been playing out at “reopening” rallies. Those attending such rallies have often expressed anger and frustration at states’ stay-at-home orders, with President Donald Trump this month tweeting, “These are very good people, but they are angry.” And a second Washington Post–University of Maryland poll, released May 13, found that Republicans and Republican-leaning independents were much less worried about becoming seriously ill from COVID-19 than Democrats and Democrat-leaning independents — 44 percent compared with 68 percent.

Science can help explain how people respond differently to risks. And it can also provide clues for how to move past snap judgments to make sound choices when the answers are far from clear — a position many people now find themselves in. Science News asked Jennifer Lerner, a behavioral scientist at Harvard University’s John F. Kennedy School of Government, about how fear and anger influence how people perceive risk and make decisions. This interview has been condensed and edited for clarity.

SN: Why are risks so hard to evaluate during this pandemic?

Lerner: We know that anything that’s unpredictable or uncertain ratchets up people’s perception of risk. A lot of what we know about risk perception comes from Paul Slovic [a researcher at the University of Oregon]. He found that things that seem to be certain and predictable and under individual control are perceived as less risky, even if they are very risky in real life. For instance, people perceive that handguns are safe because they’re under individual control, even though handguns have enormously high accident rates. Conversely, things that seem uncertain, unpredictable and not controllable seem more risky.

These unpredictable things include radioactive waste, DNA technology and nuclear reactor disasters. COVID-19 also fits that category. It has a long latency period and affects people differently. And the risk communication from the U.S. federal government has been extremely misleading. For example, President Trump originally called the virus a hoax, and federal officials said that masks would not protect people.

Other research shows that when people are in heightened stress for a very long period of time, they’re not in a good mind-set to carefully weigh costs and benefits of different actions. There becomes this need to resolve and get certainty about things. So that’s where we are now.

SN: Your research looks at how emotions color decision making. Can you talk about that?

Lerner: Many psychological scientists now assume that emotions are, for better or worse, a dominant driver of most meaningful decisions in life.

It used to be thought that when people were experiencing negative emotions like fear, anger, anxiety, hostility or frustration, they would have a pessimistic outlook and see everything as riskier than if they were in a neutral emotional state. But that’s not true. We’ve conducted a lot of studies all showing that fear heightens subsequent perception of risk, while anger reduces that perception of risk. Labs around the world have also replicated this finding.

That makes sense. Fear automatically triggers a sense of uncertainty and a sense that one cannot control what will happen. But anger triggers the opposite pattern. When people are mad, they don’t believe that factors beyond anyone’s control caused the bad outcome. They blame an individual. They have a meta-experience of certainty.

SN: How does your research into fearful versus angry people play out in real life?

Lerner: We did several studies in the aftermath of the September 11 attacks to study how a global event triggers emotional responses. The samples we used were nationally representative and allowed us to generalize to the U.S. population as a whole.

First, we looked at people’s predisposition toward fear and anxiety or anger and hostility using questionnaires shortly after the attacks. Two months later, we tested to see if we could trigger emotions by randomly assigning participants to read either an anger- or fear-inducing news article. Participants who were predisposed to experience anxiety or fear or who read fear-inducing stories were more likely than those in the anger conditions to say that they were going to take risk-prevention measures, like buy a hazmat suit or screen their mail due to the anthrax scare. Basically fear and anger have opposing influences on people’s risk perceptions, risk preferences, the choices they make and policies they support.

About a year after 9/11, we again induced fear and anger in the participants with the same results around perceptions of risk. But we also found that those induced feelings colored not just how participants felt about the future but also their pasts. People are not even aware that their emotions have been manipulated.

SN: You used real news stories and found that emotions are easy to manipulate. What happens when we read fake news?

Lerner: Humans are very susceptible to manipulation by emotionally evocative stories. Fake news could influence our emotions even more than real news stories, as such stories are designed specifically to influence emotions.

One implication from our studies is that citizens need protection from emotional manipulation, especially with life-defining topics. Both in the aftermath of 9/11 and in the present pandemic, these emotion effects can be large enough to tip the scales in close decisions. People can be made angry enough to accept risky policies, such as certainty around when to reopen stores, or scared enough to purchase hoax remedies.

SN: So fear isn’t great, but is it a safer emotion than anger during a health crisis?

Lerner: Extreme levels of either fear or anger are both detrimental to the kind of careful trade-off analysis that will help people make smart choices for their families. The more people are in a state of anger, the more their perception of risk will be diminished. A protracted state of anxiety nudges people to avoid risks, but staying in that high anxiety state for too long can lead to excess secretion of cortisol [a stress hormone] that can suppress the immune system. And people in an extended hyper-state of vigilance struggle to distinguish lower threats from higher threats.

SN: If emotions get us into trouble, what can we do to make better decisions?

Lerner: Emotions are valuable guides to decision making. They are a faster system than cognition. When we have to immediately jump back or run away from a danger, emotions like fear, anger and distrust serve us well.

Where we get into trouble is if we experience emotions that are too intense, so much so that they can shut down the kind of systematic decision making that needs to be involved in resolving inevitable trade-offs like risks to income versus risks to health.

We are actively researching that question in relation to COVID-19 in countries around the world. We have one study looking at how the way risks are communicated affects citizens’ adherence to risk-prevention behavior. The other study is on emotional regulation and how to increase resilience. Our hope is that those findings will help us identify ways to teach people strategies to decrease negative emotions like fear and anger and increase positive emotions like gratitude and compassion, so that they can make sound judgements and decisions.