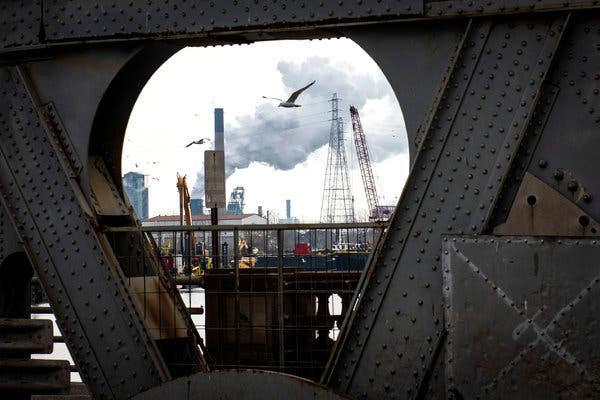 This isn’t the first time Vicki Dobbins’s town has been forced to shelter in place.

Last year, the Marathon Petroleum refinery that looms over her neighborhood near Detroit emitted a pungent gas, causing nausea and dizziness among neighbors and prompting health officials to warn people to stay inside. When a stay-at-home advisory returned in March, this time for the coronavirus, “it was just devastating,” Ms. Dobbins said.

Ms. Dobbins, who is 76, later contracted Covid-19, and spent two weeks on oxygen in intensive care. Now she has a question. “Do the polluters in our area make us more susceptible to asthma, bronchitis, heart failure, cancers?” she asked. “Is the virus just going to be one of the ones added to that list?”

Nationwide, low-income communities of color like hers, River Rouge, Mich., are exposed to significantly higher levels of pollution, studies have found, and also see higher levels of lung disease and other ailments. Now, scientists are racing to understand if long-term exposure to air pollution plays a role in the coronavirus crisis, particularly since minorities are disproportionately dying.

And while it’s impossible to say with certainty that any one person was made more vulnerable to the virus because of pollution, earlier studies of other respiratory diseases have established that long-term exposure to air pollution increases the risk of those illness.

“The system has allowed, basically, low-income people and people of color to have to breathe the pollution,” said Dr. Abdul El-Sayed, an epidemiologist and Detroit’s former health director.

The tensions are playing out in minority communities across the country that live with industrial air pollution and the health risks that come with it. A neighborhood in Houston, Texas, for instance, that is home not only to factories making plastics materials used in medical masks, but also incinerators that burn medical waste. A community outside San Francisco near the state’s largest refinery but far from most hospitals.

And the county where Ms. Dobbins lives, which has seen more Covid-19 deaths than almost any other outside of New York state. 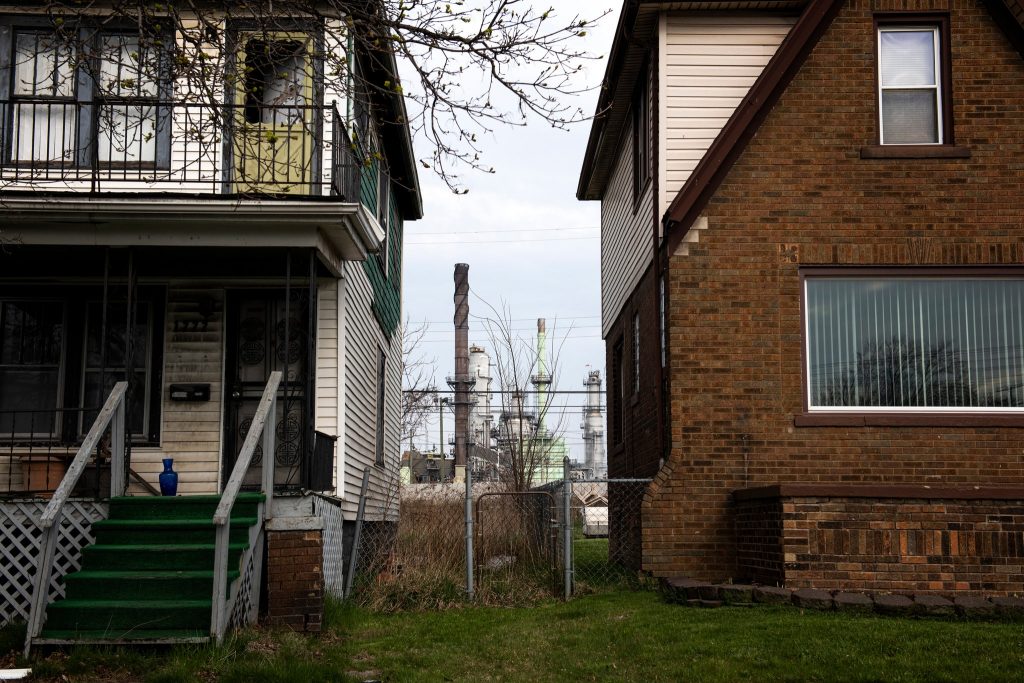 Ms. Dobbins lives in one of Michigan’s most polluted ZIP codes.

There’s a refinery, two power stations, a steel mill and a sewage treatment plant within a five-mile radius. The area’s levels of ozone, a gas that has been linked to lung disease and other ailments, frequently exceed federal limits.

Her county has seen 2,192 deaths so far, putting it in the same league as much larger Cook County, Ill., which is home to Chicago and 2,589 recorded deaths. In Michigan, African-Americans have accounted for more than 40 percent of deaths, even though they make up only 15 percent of the population.

A substitute teacher, Ms. Dobbins had already struggled to breathe since developing asthma after moving back to the neighborhood 20 years ago to care for her mother. She got used to carrying around her inhaler and also sheltering in place, as she did a year ago during the warning about the Marathon refinery.

Back then, the Detroit Health Department advised people to stay indoors with the windows closed, saying that the odors could cause “symptoms such as nausea, vomiting, headaches, or difficulty breathing” among people sensitive to the smells. A flare failure had released hydrogen sulfide, sulfur dioxide and other compounds, Marathon told regulators. In a statement, a company spokesman, Jamal T. Kheiry, said the plant operator “did not detect any emission levels of concern” in the episode. 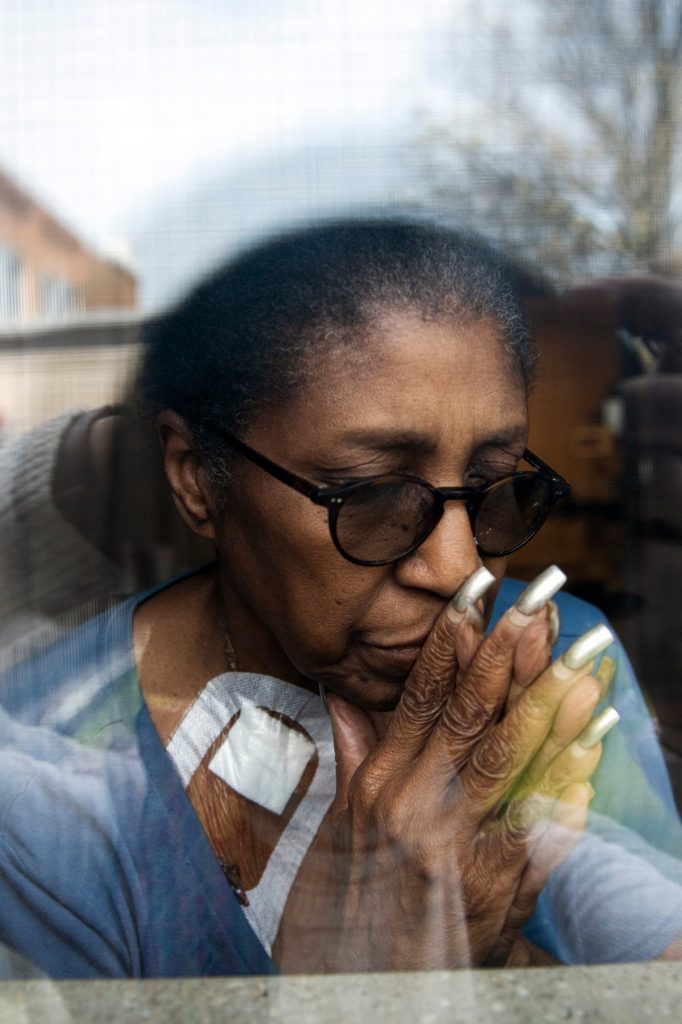 Vicki Dobbins has a question: Have decades of industrial air pollution in her area made people more susceptible to Covid-19?

The area around River Rouge, on the southwest edge of Detroit, is among the state’s most polluted.

Today, amid the pandemic, Marathon has urged state regulators to suspend environmental monitoring rules, partly so its staff will not have to work and risk infection. On April 2, Timothy J. Peterkoski, Marathon’s environmental director, wrote to regulators that some “sampling, testing, record-keeping and reporting activities may need to be deferred.”

When the virus lockdown came in March, the entire state sheltered at home, including Ms. Dobbins. Only then did she discover that she had already caught the coronavirus, most likely at a birthday party a few weeks earlier in Detroit, where she danced the night away with friends, she said.

She was hospitalized with pneumonia, then transferred to intensive care. Then, her kidneys failed. She was among the lucky and today is recovering at home. Nevertheless, Ms. Dobbins now struggles to take the 20 steps to and from her bathroom. “I’m so winded I can’t breathe,” she said, pausing to catch her breath while speaking on the phone.

And she struggled to describe the industrial smells that plague her neighborhood: “I smell it every day. I live it every day.” The neighborhoods surrounding the Houston Ship Channel, a bustling petrochemical hub of refineries and oil tankers, produce the raw materials vital to some of the most highly sought-after products in the nation right now: masks, plastic gowns and other medical equipment.

And when that gear is discarded, residents fear that some of it is coming back to be incinerated in the five medical waste facilities in and around Houston, Port Arthur and surrounding counties.

It is the kind of one-two industrial punch that has contributed to air pollution for decades around the neighborhoods’ sizable African-American and Hispanic populations. The American Lung Association ranks Houston among the nation’s most polluted cities.

Today, Harris County, which includes metropolitan Houston, has reported more than 9,000 coronavirus cases. Minority groups have accounted for about two-thirds of early Covid-19 deaths in the city, despite making up only 22 percent of the population.

“Hospitals need the masks, the gloves,” said Yvette Arellano, a community organizer in Houston’s polluted neighborhoods. But the irony, she said, is that communities like this “are breathing in the toxins that industry says is necessary for the safety of other people.” 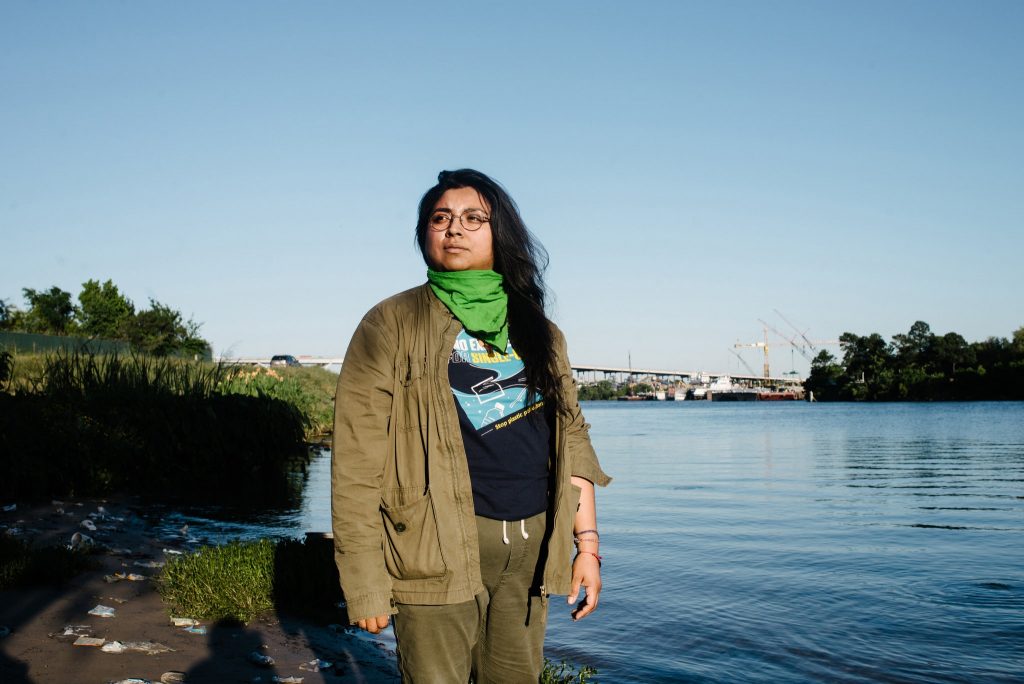 Yvette Arellano on the bank of Buffalo Bayou in industrial east Houston.

Despite the economic shutdown, petrochemical companies around Houston have kept operating because they are essential for the production of masks and protective equipment. Research has shown that most waste incinerators in the United States are in lower-income communities of color, and medical waste, when burned, can release dioxins and other compounds.

Denae W. King, an expert in environmental health at Texas Southern University, said more research was needed to pin down if and precisely how air pollution might make communities more vulnerable. But particulate matter, which can lodge deep in the lungs and cause inflammation, adds risk, she said. “If your lungs have already been exposed, you already have underlying issues related to inflammation, and then you’re diagnosed with Covid-19, that just exacerbates the problems that already exist.”

Ms. Arellano says she suspects, but can’t be sure, that her own mother caught coronavirus. She had the dry cough, a headache and muscle pain. But health officials said her mother wouldn’t qualify for a test without proof that she had run a sustained fever, a tricky ask for Americans with no family physician.

Her mother never got tested. But because of her cough, she hasn’t been able to keep working as a grocery cashier.

Pollution Nearby, Hospitals Far Away 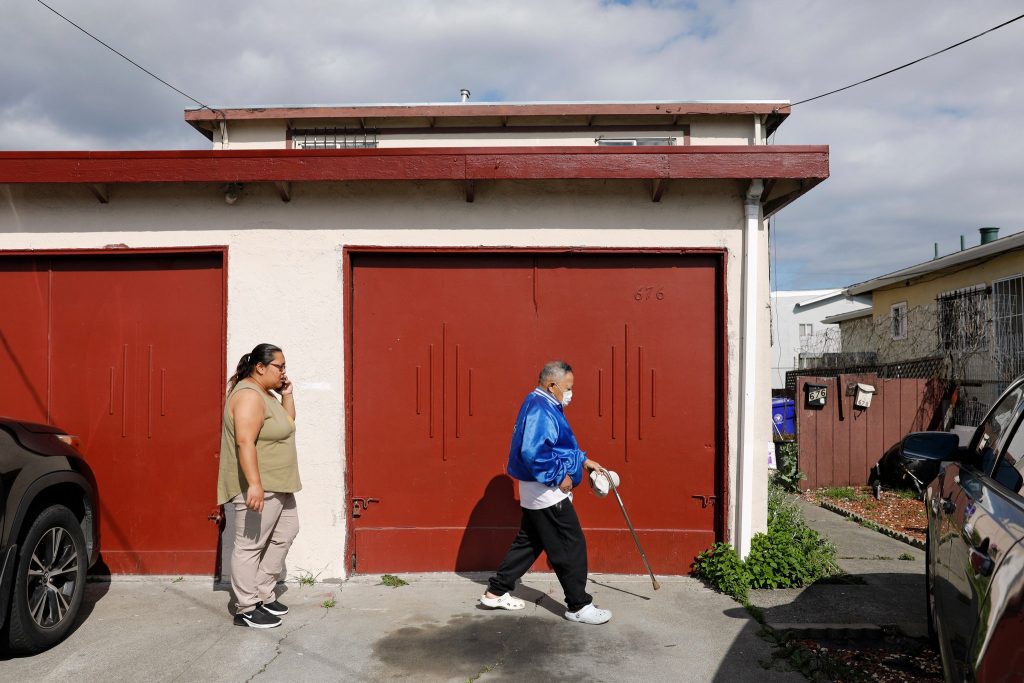 Siengther Lakthanasuk fought for the Americans against communist forces for 15 years in Indochina, and waited another 16 years at a refugee camp in Thailand before landing in 1991 in Richmond, Calif., in Contra Costa County, just a few minutes from a Chevron refinery that is the state’s largest polluter.

Mr. Lakthanasuk’s neighborhood, a community of people hailing from his native Laos, is also affected by other industrial pollution, including coal trains headed to port.

While Richmond doesn’t lack for industrial infrastructure, it does fall short in health care options. The only public hospital serving the city of 110,000 shut its doors in 2015.

Contra Costa County has recorded 1,089 coronavirus cases, and its fatality rate has climbed to nearly 3 percent, almost twice that of wealthier San Francisco a short drive away. That disparity underscores regional inequalities even as California has been praised for its early virus intervention — including the nation’s first shelter-in-place orders in six counties, including Contra Costa.

Many local families are like Mr. Lakthanasuk’s, intergenerational households with service industry jobs that are either risky or have disappeared. Mr. Lakthanasuk’s wife lost her job at a nearby casino shuttered by the pandemic. His two adult daughters work at nearby grocery stores, essential workers both to the community and for their income. 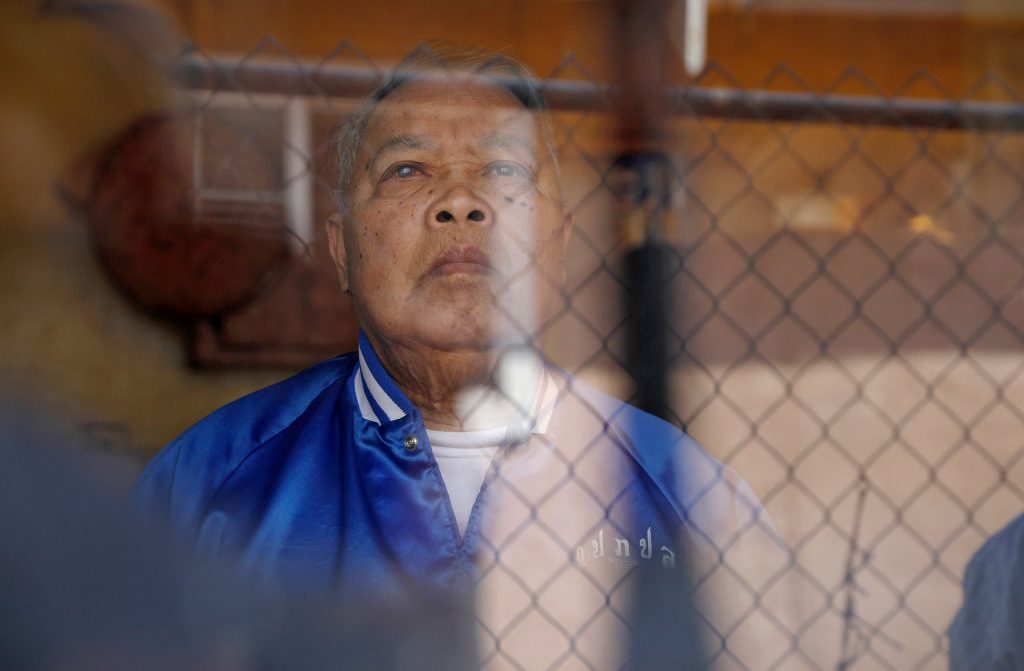 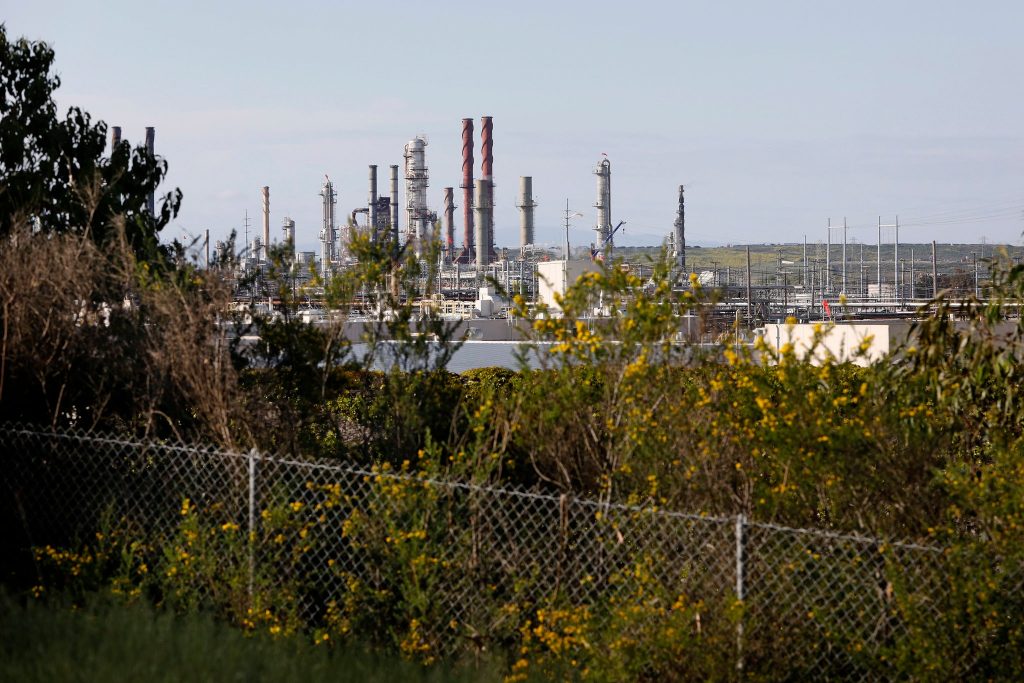 The Chevron refinery in Richmond.

Members of Mr. Lakthanasuk’s family cleaned their shoes after coming home from work at a grocery store.

John Gioa, who serves on the county’s board of supervisors and the state’s Air Resources Board, said a new medical station in Richmond with 250 beds, housed in a former Ford Motor factory, would bring much-needed care. And testing had been greatly expanded, he said, with at least three locations in the city.

“I’m still concerned about the future,” he said. “Lower-income communities and those impacted by air pollution are at greater risk, and we need to be prepared.”

In 2012, a fire at the Chevron facility sent more than 10,000 people to seek treatment for respiratory difficulties, including Mr. Lakthanasuk and his family. “We were packed in the hospital,” Mr. Lakthanasuk said, recalling the fire. “But that’s not the only time. There’s been a lot of incidents.”

Last year at the refinery, episodes of flaring, the intentional burning of hydrogen, sent black smoke across the neighborhood, prompting an investigation by air-quality officials. Chevron said the flaring was related to the start-up of a more efficient hydrogen processing unit, now complete.

A spokesman for Chevron, Braden Reddall, said the refinery air-monitoring systems measure five chemical compounds at three locations, and those readings as of mid-May do not exceed health limits.

Mr. Lakthanasuk’s health concerns and financial strains are now starting to reach well beyond his boxy, red-and-yellow home in Richmond. His extended family back in Laos is now feeling the effects, too.

They are rice farmers, he said, and their crop last year was hit hard by drought, which local officials have linked to climate change. Despite fears for his own safety, Mr. Lakthanasuk recently ventured out to wire his nephew an emergency payment of $300 so he could buy food.

In his many years spent fighting communists in Indochina, Mr. Lakthanasuk said, he is proud of having never been captured. The virus, though, has given him a small taste. “Right now, home is worse than being a prisoner,” he said.