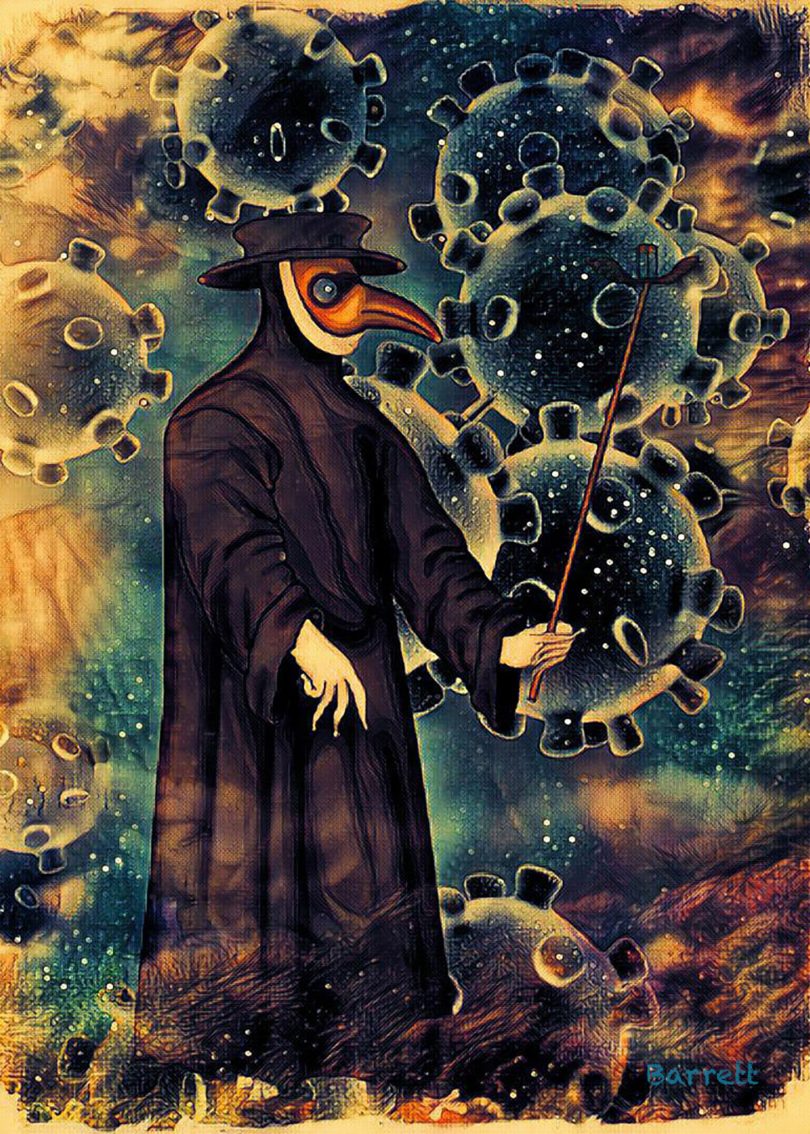 Harvard researcher says many having nights full of bugs, masks, and natural disasters

Much of Deirdre Barrett’s work has involved the study of dreams, particularly the distressing dreams and nightmares of those affected by trauma, including combat veterans, former prisoners of war, and 9/11 first responders. More recently, the assistant professor of psychology in the Department of Psychiatry at Harvard Medical School, whose books include “The Committee of Sleep” and “Trauma and Dreams,” has created an online survey to collect the dreams of people living through the coronavirus pandemic. To date she has more than 2,500 responses recounting more than 6,000 dreams. Barrett spoke with the Gazette about how she sees the outbreak affecting the quality and content of people’s dreams.

GAZETTE: What exactly is happening in our subconscious during periods of extreme stress? How is that manifesting in our dreams?

BARRETT: When we dream, our brain is in this state where visual areas are much more active than when we’re awake, and on average, emotional areas are a little more active. Our prefrontal cortex right behind our forehead, which controls the most precise linear logic and also censors inappropriate social things, as well as the right way to do things in our professional thinking, is very much damped down. Our verbal areas are somewhat less active. So, I think we’re thinking about the same things that we were most focused on by day, but in this other state of consciousness. We have more intuitive thinking and less linear thinking about things. Once in a while, we’ll see that our unconscious looks much more scared than we’re feeling by day or provides us with some optimistic perspective that we haven’t had by day. But I think in general, being anxious by day and having anxiety dreams correlate both as traits that a person carries over long periods of time, but also as a state for a short period of time when there’s a stressor.

GAZETTE: Do you think extra sleep, or lack of sleep, might contribute to vivid coronavirus dreams?

BARRETT: More sleep than usual, such as many people are getting now, means more dream time. And it’s not just proportional: Our last REM period of the night is the longest and more “dense” in REM, which correlates with long, vivid dreams, so an alarm clock chopping off a bit of sleep chops off a lot of dreaming. The relationship to insomnia is more complicated. If one is simply sleeping a shorter time, then there’s less dreaming. However, if less sleep is because of frequent awakenings — whether due to noise, anxiety, etc. — one is likely to awaken out of more REM periods, which results in more dream recall though not more actual dreaming. 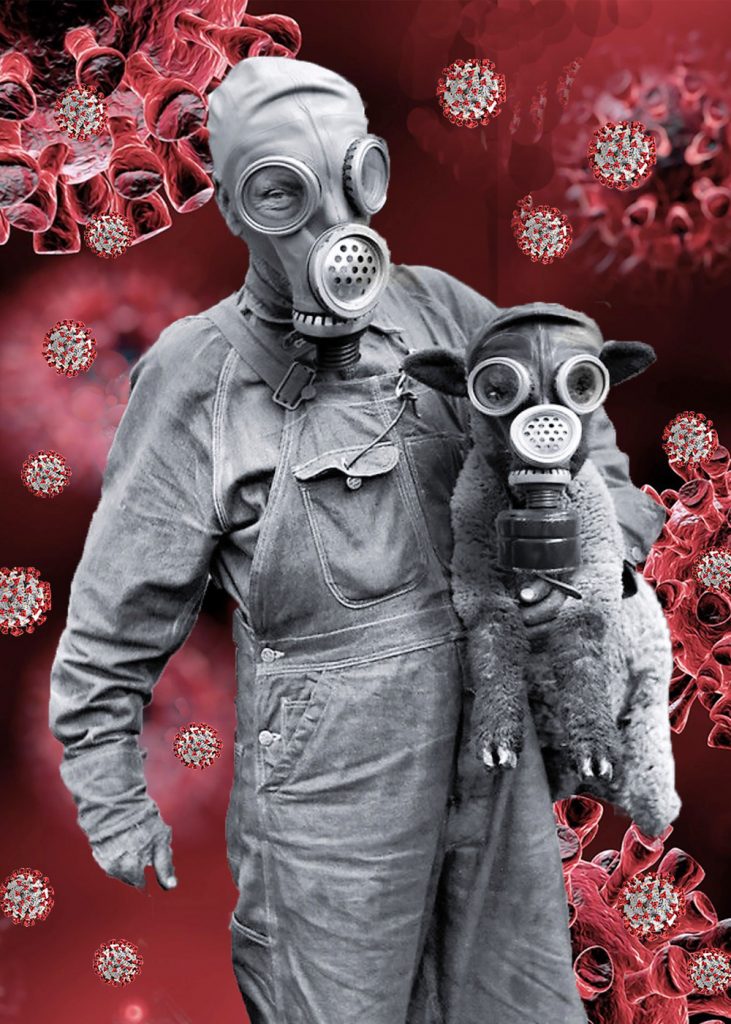 Barrett has had her own coronavirus-related dreams. This digitally manipulated photo-collage was inspired by her dream in which she was “trying to put a hood over my cat Morpheus’s head to protect him from something toxic in the air.”

GAZETTE: Broadly, are you seeing patterns or themes in the dreams you’ve been collecting through your survey?

BARRETT: I’m noticing big clusters of dream content. One is very literally about getting the virus — that’s been a fairly common dream where the person is short of breath or spiking a fever. Or sometimes it’s a little more fantastic. One woman looked down and saw blue stripes on her stomach and remembered in the dream that was supposed to be the first sign of a COVID-19 infection. Then there are metaphors for the virus — there’s a big sub-cluster of bug dreams. After 9/11, I saw metaphors as well as literal dreams about those events. But I didn’t see bug dreams after 9/11. And I’ve just seen dozens and dozens and dozens of every kind of bug imaginable attacking the dreamer: There are swarms of every kind of flying insect you’ve ever heard of; there are armies of cockroaches racing at the dreamer; there are masses of wriggling worms; there were some grasshoppers with vampire fangs; there are bed bugs, stink bugs.

GAZETTE: What do you think that is about?

BARRETT: When we say “I’ve got a bug,” that means “I’m sick” and often “I’ve got a virus.” So I think it’s partly just that association. But then a little bit deeper than just the word, I think, is the idea of lots of little things that cumulatively can hurt or kill you is really a very good metaphor for the virus particles.

GAZETTE: Are you seeing other things that represent the virus in people’s dreams?

BARRETT: I see every other bad event possible being plugged in as a metaphor for the virus. There are tsunamis and tornadoes and hurricanes and earthquakes and fires breaking out and mass shooters in the streets. And I did see all of those after 9/11. But I think a somewhat higher proportion of these dreams are metaphoric, because we don’t have one clear image that automatically goes with the COVID-19 virus or the pandemic. And yet the dreaming mind is so visual that, when it’s feeling anxious and worried, it seeks to represent that with an appropriate visual image. For 9/11, we saw plenty of dreams about buildings falling down or planes crashing into things, and hijackers with knives. So today, there are a fair number of metaphoric ones and the metaphoric ones will often have a little bit of literal pandemic content. For instance, [New York Gov. Andrew] Cuomo will be telling people in their dreams that they have to shelter in their homes because of the shooters in the street or the swarms of bugs, or you need to put a mask on because of the swarms of bugs, or you’re sheltering at home because fires are breaking out, or [President] Trump is telling you that the tsunami is fake news. So, they’ll have bits of sort of the real details included. 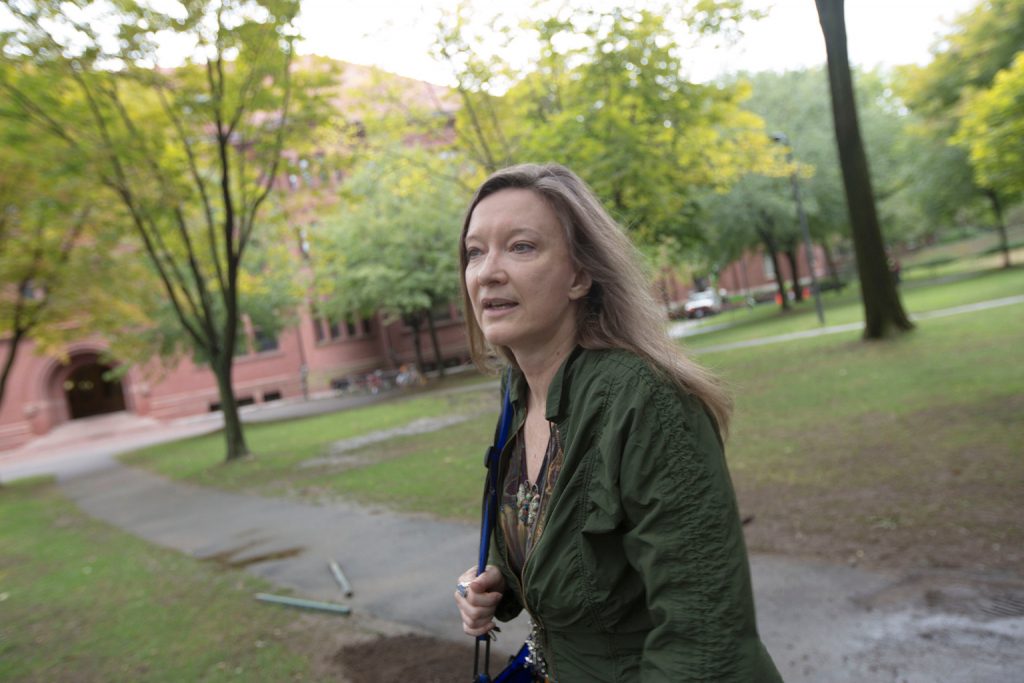 Deirdre Barrett has conducted several research projects on dreams, including an undergraduate class which did dream research based on old journals of World War II prisoners of war.

GAZETTE: Anything else that you’ve noticed specifically related to coronavirus?

BARRETT: Early on, I saw an awful lot of dreams that seemed to be sort of practicing mask wearing or social distancing. In about half of them, the dreamer would be out in public and realize they didn’t have their mask and panic or realize they had gotten too close to someone. In the other half, they would be doing what they were supposed to, and other people would not have their masks on or be crowding in the dream or be coughing on the dreamer. And they seemed like just these anxiety dreams. As you’re learning a new skill, you often kind of dream about what you’re trying to learn. There’s a little less emphasis on the, “I’m getting the virus,” either metaphorically or for real, in dreams. What I’m beginning to see — these have been there from the start but they’re on the increase — are dreams about the aspects of the lockdown or other things that are an outgrowth of the pandemic. The most common is definitely the shelter-at-home stuff. People who are sheltering at home alone will dream that they’ve been locked up in prison, or one woman was sent to Mars by herself to establish the first one-person Mars colony. There was a woman who in reality was homeschooling her child, but she dreamed that that someone had decided that her child’s entire class had to come and live with her. So you see dreams exaggerating isolation for some people or exaggerating crowding or a reduction in privacy rights for others. And those are on the increase, as are dreams about finding out all your money’s gone, or trying to get a job and not being able to.

GAZETTE: Are you able to distinguish any differences in the dreams of those who are on the front lines? Or maybe even people who’ve had a diagnosis of COVID-19?

BARRETT: I have more than 600 health care workers now. It’s still a small part of the total sample, but I really see strong trends. Of the people who are working in the ICU or the emergency rooms or even just general medical units, in most cases they’re having full-on nightmares. And they look like trauma nightmares, meaning they’re not as dreamlike and bizarre and metaphorical as most of the other dreams. They tend to involve taking care of someone who’s dying of COVID-19, and they’re trying to do something like put a patient on a respirator, or get the tube reattached that’s come off a respirator, or the respirator machines are not working. So they feel like it’s their responsibility to save this person’s life, and yet they don’t actually have much control over it, and the person is dying anyway. That’s their nightmare. It’s the worst moment from their daytime experiences.

“I see every other bad event possible being plugged in as a metaphor for the virus.”

GAZETTE: Can you say more about the difference between anxiety dreams, nightmares, and trauma dreams?

BARRETT: All anxiety dreams are not nightmares. We usually reserve the word nightmare for dreams where somebody just feels overwhelmed with terror, as opposed to when anxiety dominates the dream. But traumatic nightmares are really a thing unto themselves. They don’t look as dreamlike as dreams. The vast majority of ordinary dreams and garden-variety nightmares are happening during rapid-eye-movement, or REM, sleep. That’s not true of traumatic nightmares when they’ve been studied in the sleep lab. They’re happening across all stages of sleep, which is really unusual. We think that they may actually be similar to what is happening with daytime flashbacks, that there are just these intrusive trauma memories that are intruding on your consciousness during any state of consciousness, from waking to dreaming sleep to what is usually nondreaming sleep.

GAZETTE: Is there anything we can do to try to control what we dream about?

BARRETT: The best way to do that is to think of what you would like to dream about. You could pick out a person you’d like to see in your dream tonight, or a favorite place. Some people enjoy flying dreams, or some people have just had an all-time lifetime favorite dream. So pick what you’d like to dream about. And if it’s a general one, like a person or place, just visualize that person or place. Or you can put some photograph of what you’re trying to dream about on your nightstand so you look at it as the last thing before you go to sleep. If you have a particular favorite dream you’re focusing on, you might try to replay that in detail before falling asleep. And that would make you likelier to have a similar dream. And that both makes it likelier that you’ll dream about that content, and it also makes it less likely you’ll have anxiety dreams.