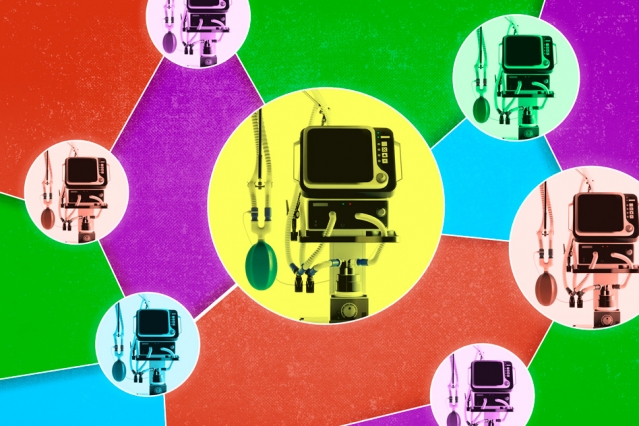 When hospitals face ventilator shortages during the Covid-19 crisis, they often rely on state policies to determine which patients are assigned the equipment. In Michigan, for example, medical personnel who get sick have priority for ventilators. Many other states determine patient priority from a formula using a patient’s prognosis and age.

Those rules address tough decisions, but as constituted they also raise questions about equity, since these policies prioritize particular groups — such as health care workers and younger patients. A new working paper co-authored by an MIT professor offers an alternative design: a “reserve system” that would allocate medical resources among multiple groups at the same time, rather than applying a single set of criteria to all patients.

“The overwhelming majority of states use a single-dimension priority points system to allocate ventilators,” says MIT economist Parag Pathak, an expert in designing markets that allocate nonfinancial goods. “Instead of requiring a single score for all units, we suggest what we call reserve categories, where for [only] a portion of units, we use one such priority ordering.” With such an approach, he adds, “You never run into this situation where [one group] either gets all of the ventilators, or they get none of them.”

The principles behind the reserve system need not only apply to ventilators, notes Pathak. Looking ahead to the full trajectory of the Covid-19 pandemic, the concept also relates to the distribution of tests, therapeutic treatments, and vaccines — any medical resource where demand exceeds supply.

In many cases, the Covid-19 virus attacks the lungs, making breathing difficult and necessitating the use of ventilators for some patients. As of March 2020, the U.S. had somewhere between 72,000 and 82,000 ventilators available, but some hospitals have had shortages, and even with increased ventilator production, there may be more shortages ahead.

Several states had already developed their own ventilator-use policies, prior to the pandemic. Michigan crafted its rules in 2012. In New York, a 2015 ventilator task force built a policy that has been largely adopted by California, Colorado, Massachusetts, New Jersey, Oklahoma, and Pennsylvania.

The New York policy uses the “SOFA” score — the Sequential Organ Failure Assessment — to rate the short-term health of six organ systems in patients on a scale from 1 to 4, with a lower score being better. The New York system takes this initial SOFA score, then adds scores for the long-term prognosis for a patient (based on their co-morbidities), and the patient’s age. Patients with the lowest overall scores receive ventilators; everyone is reassessed every 48 hours. This is the system many hospitals have been using during the Covid-19 crisis.

The SOFA-based approach has the benefit of simplicity, though its formula is necessarily somewhat arbitrary. But this is hardly the only approach that could be used in these situations. Some patients’ rights advocates could contend that all patients should simply be treated equally, meaning that no health-based criteria should be used. By contrast, Michigan-style policies are determinedly “instrumental” in nature: By prioritizing health care workers, the aim is to save people who could help save even more lives.

The researchers say in the paper they are taking a “middle-ground approach,” by emphasizing that a state can, in effect, combine the other approaches. A state could have one ventilator reserve for the general public, one for frontline health care workers, one for patients who need ventilators due to non-Covid-19 illnesses, or use additional categories.

Pathak says he is “agnostic” about what the range of categories should exist, but underlines that a blend of priorities is preferable to a one-size-fits-all system.

“The reason some of these rationing guidelines have constrained themselves in what values they can entertain is because of the allocation mechanism,” Pathak says. “Whenever you write down a guideline like this, it’s a statement about what values are important, and really, in a nutshell, about whose life matters more. This is why we think our proposal is compelling. If you are excluding certain values just because of the allocation mechanism, what kind of message is that sending?”

To be sure, the researchers explain in the paper, the specifics of the “reserve system” approach do matter. The definitions of reserve-system categories could either be overlapping or exclusive, for example: Are medical personnel only eligible for a group of ventilators reserved for them, or are they also eligible for ventilators assigned to the rest of the general public?

Moreover, the order in which the particular ventilator reserves are assigned can affect the overall distribution of the devices. Suppose a state deems medical personnel to be eligible for two different ventilator reserves — those for the general public and those reserved just for health care workers. If the ventilators assigned to the general public are deployed first, medical workers will end up having access to more ventilators than if their own supply was tapped into first, as the researchers detail in the paper.

Such principles have been explored in past research by all the co-authors, including Sönmez, who Pathak calls a “heroic figure in the field” of market-design principles.

Given the time frame in which the pandemic is unfolding, and the many areas in which the reserve system can be applied, the research hope their work will begin to inform public officials and policmakers by the time, say, effective therapeutics for Covid-19 become more prevalent.

“The idea is to try to take the current [ventilator] crisis and make progress in other areas,” Pathak says. “We’re quite interested in trying to get this deployed and have it be part of rationing guidelines.”