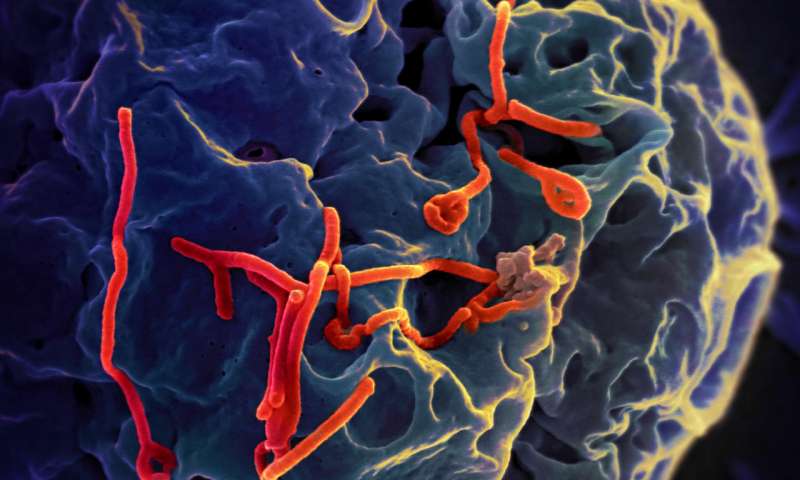 As the world focuses on finding a COVID-19 vaccine, research continues on other potentially catastrophic pandemic diseases, including Ebola and Marburg viruses.

The world cannot afford to take our eye of other threats, says Flinders University Professor Nikolai Petrovsky, who warns the highly lethal and infectious Ebola virus could appear in a more virulent form.

“While a live virus vaccine has recently been developed to protect against Ebola, it is not necessarily effective against all forms of Ebola and Marburg and is sensitive to heat which requires it to be stored frozen—a problem in poor tropical countries in Africa with erratic power supplies, which is where Ebola resides,” he says.

In the latest collaboration with US partners, a vaccine turbocharger called Advax adjuvant, developed at Professor Petrovsky’s Australian laboratory was combined with a synthetic protein against Ebola developed by the United States Army Medical Research Institute of Infectious Disease (USAMRIID).

The resulting vaccine appeared to be highly protective against a lethal Ebola virus infection in mice, including after just a single injection. As well, the protection generated by the vaccine was long-lasting and shown to be able to be transferred to naïve mice using antibodies taken from the immunised mice.

This work provides promise that a more convenient and heat stable version of the Ebola vaccine can be developed, which could then play a key role in preventing further Ebola outbreaks in Africa, Professor Petrovsky says.

“While developing a COVID-19 vaccine is a top priority including for our team, we must also continue developing vaccines against a wide range of other potentially catastrophic pandemic diseases including Ebola and Marburg viruses, as these continue to periodically jump from wild animals to people in Africa,” he says.

The Petrovsky lab and Vaxine Pty Ltd is currently using the same Advax vaccine turbocharger approach to develop a recombinant protein vaccine against COVID-19, which is now in late stage animal testing ahead of human trials in Australia.

“Like coronaviruses, we must continue research into improving the world’s vaccine pipeline for diseases, particularly rapidly changing viral infections believed to be transmitted to people from wild animals,” he says.

The World Health Organisation notes Ebola virus disease (EVD) is a severe, generally fatal illness with an average case fatality of over 50%.

The 2014-2016 outbreak in West Africa was the largest and most complex Ebola outbreak with more cases and deaths than all others combined since the virus was discovered in 1976. It also spread between countries, starting in Guinea then moving across land borders to Sierra Leone and Liberia.

Infected patients travelled to many countries around the globe before the outbreak was stopped by quarantine measures.