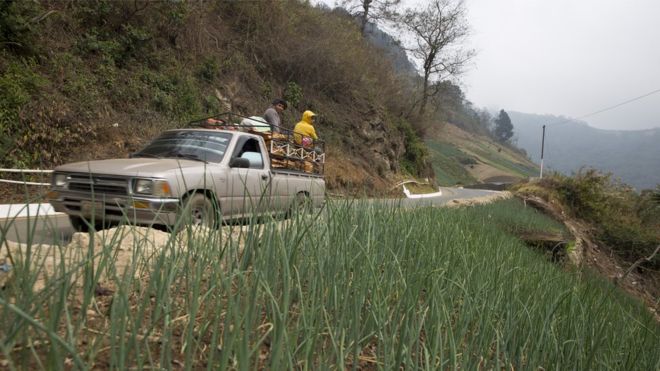 During the 20 years that Alejandro Carrillo has worked in the United States, he has always sent money home.

Earnings from his time with construction crews in Florida were enough to provide food and an education to each of his seven children and to build his wife a house in which to raise them.

It was also enough to later help his 33-year-old son, José Carrillo, purchase a small, green car to start a taxi business.

Funds sent back to Central America from migrants who work in economically developed countries are a lifeline to families like the Carrillos.

Remittances represent a steady cash flow which keeps receivers out of poverty and provides a safety net in times of crisis. 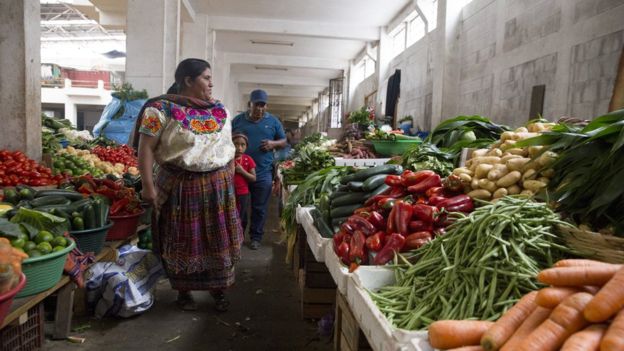 Many Guatemalans rely on remittances to make ends meet

And that number was steadily growing. Until Covid-19 hit.

Guatemala has reported more than 1,600 confirmed cases of coronavirus. Measures to slow its spread include nightly curfews and restrictions on movement rather than the all-encompassing lockdowns other Latin American governments have imposed in recent months. 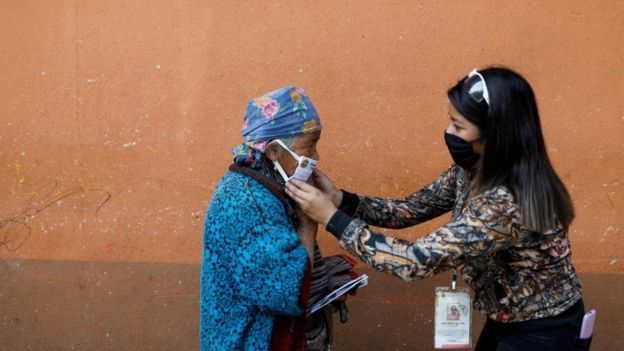 But in the US, the lockdowns imposed by many states have hit the economy hard and unemployment has shot up.

More than 33 million people in the US filed for unemployment between the beginning of the pandemic and 7 May, making this the worst employment crisis in US history.

In March, Alejandro’s work practically evaporated and the remittances he used to send dried up too, leaving his family without their safety net.

The same is true for many of the millions of Central Americans in the US doing domestic work and manual labour. And this economic turmoil ripples across the communities they have left behind.

“Practically everything he earns goes toward surviving in the United States. He’s not sending anything anymore,” José Carrillo says of his father. 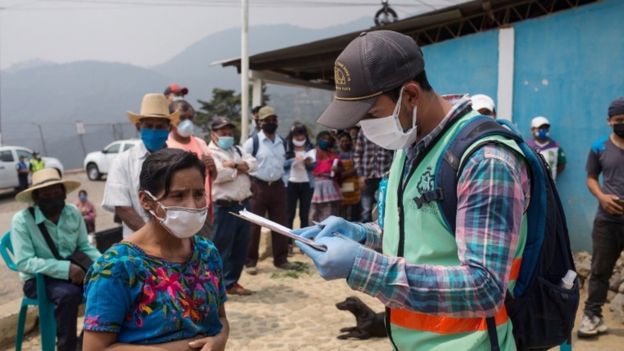 With remittances dwindling many Guatemalans have been relying on aid

“Honestly, it worries me because there are a lot of families who depend on these remittances. If they don’t send money, people don’t have anything to live off.”

The World Bank recently projected remittances from the US to Latin America would fall nearly 20% in 2020. Worldwide, they are expected to plummet four times more than during the aftermath of the 2008 financial crisis.

Experts say the emerging worldwide crisis is unprecedented. This is especially true for migratory countries such as Guatemala, Honduras and El Salvador, which would normally rely on remittances as a buffer.

“Remittances have been a central component of the economy in the region, and now is probably one of the first times when that source of revenue is going to be really threatened,” said Cecilia Menjivar, a University of California, Los Angeles sociology professor who studies Central America.

“We still don’t know what many of the effects could be, but it could be outright hunger,” she says.

And the strain is not just on those receiving the remittances but also on those sending them. 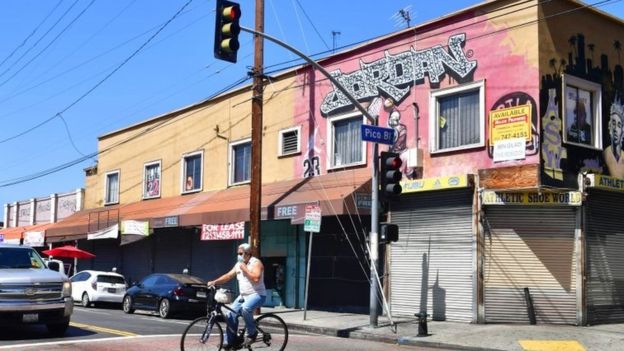 With many migrants losing their jobs in the US, remittances are drying up

Migrants may continue to send that capital until they are stretched too thinly, according to Manuel Orozco, director of the Migration, Remittances and Development programme at the Inter-American Dialogue think tank.

He says individuals who migrated to lift their families out of poverty view remittances as “financial obligations”, which are as important to them as paying rent or buying food.

Still, those payments dropped nearly 10% in March from the same period the previous year, data from Guatemala’s central bank shows. And that was before the bulk of US quarantine orders had come into full effect.

Rural Guatemala has been even more acutely affected. In the town of Cajolá, remittances have already dropped by 50% since the beginning of the crisis, said community leader Eduardo Jiménez. 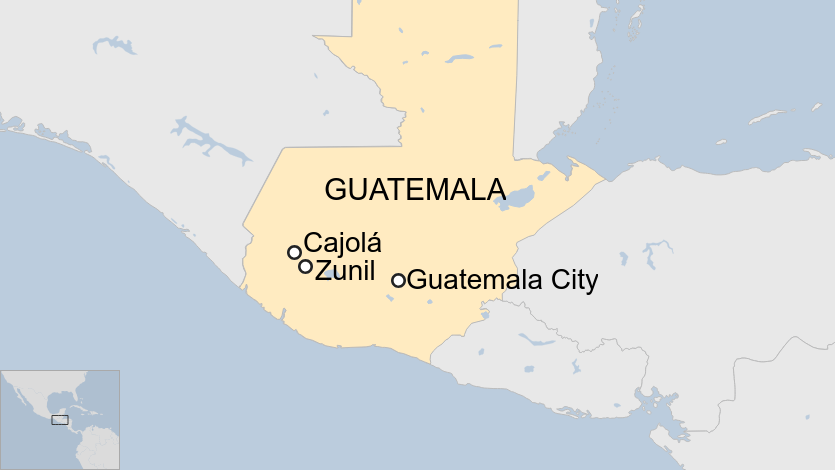 Migration to the US has moulded the village of 15,000 people since the 1980s, when the country was locked in civil conflict.

Money from those migrants generated entirely new industries, including construction, carpentry and electric work, and replaced many subsistence agriculture jobs with home building.

“Especially in Cajolá, it has a huge impact, because the remittances coming from North America have been a form of survival,” Mr Jiménez says.

Mr Jiménez was part of that migration. For 10 years, he worked as an undocumented migrant in the US and returned to Guatemala in 2006 to start carpentry and weaving workshops to give opportunities to rural Guatemalans who might otherwise migrate.

But that work has tapered off and Mr Jiménez is searching for other strategies to keep the town afloat and feed families cut off from the capital that carried them for decades.

For Cajolá, he says, that may mean returning to subsistence agriculture. Migrating to the US would be suicidal, he said.

“We Guatemalans have been creative,” Mr Jiménez says. And that gives him hope. “I’ve seen that the people of Guatemala have kept pushing forward despite the few resources we have. We’ve had to invent in order to survive.”

That is the same thing going through Mr Carrillo’s mind as he drives his neon-green cab along the rolling farmlands just outside his town.

He is scared because it is not just his father who has lost work in Florida but also one of his brothers. The brother was sending money to build a home for his wife and kids little by little, just like their father had done for them. 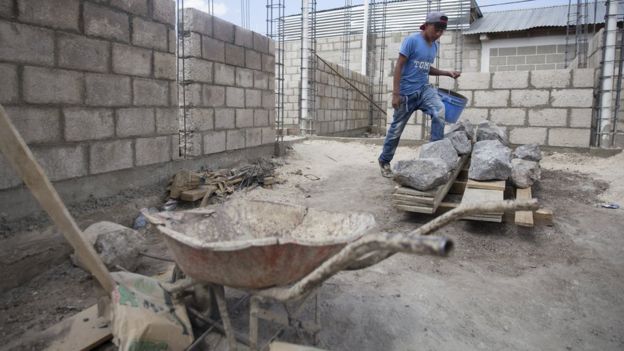 Many Guatemalans use the remittances to build homes for their families

But that construction stalled, and so has the work from Mr Carrillo’s small taxi business, leaving the family with nothing coming in.

He says he will do whatever it takes to keep his family afloat. But without remittances, that may only be sustainable for a short time.

“There aren’t many fares. We’ve been struggling, it’s not like it was before,” Mr Carrillo says. “If it continues like this, in one or two months, we’re going to get hit very hard.”