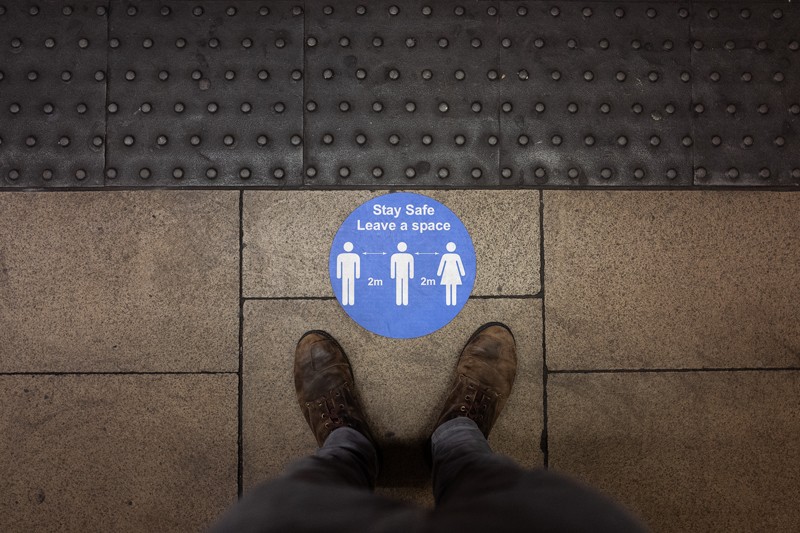 Reported rates of influenza and other infections have fallen sharply, but some communicable diseases may see a rise.

Lockdowns and social-distancing measures aimed at slowing the spread of coronavirus seem to have shortened the influenza season in the northern hemisphere by about six weeks.

Globally, an estimated 290,000–650,000 people typically die from seasonal flu, so a shorter flu season could mean tens of thousands of lives are spared. But the net impacts on global health will be hard to unpick against the large number of deaths from COVID-19 as well as other causes in 2020 and beyond. Tracking influenza and other infectious diseases can help to reveal the effectiveness of public-health policies aimed at stopping the coronavirus pandemic.

Seasonal flu cases in the northern hemisphere usually peak in February and tail off by the end of May. This year, unusually, lab-confirmed cases of influenza dropped precipitously in early April, a few weeks after the coronavirus pandemic was declared on 11 March (see ‘Flu season cut short by COVID-19 measures’). The data comes from tests of more than 150,000 samples from national influenza laboratories in 71 countries that report data to FluNet, a global surveillance system. 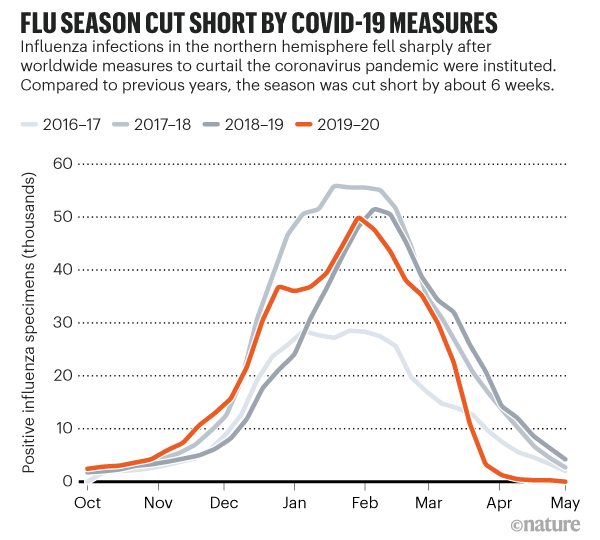 The early end to the flu season comes despite the fact that it started with a bang; in January, before the coronavirus pandemic, the influenza season was on track to be the most severe in decades.

There are other possible contributors to the decline: people with flu symptoms might have avoided clinics altogether, for example, isolating at home and so not showing up in the statistics. But the response to the pandemic is likely to be an important factor: “Public-health measures such as movement restrictions, social distancing and increased personal hygiene likely had an effect on decreasing influenza and other respiratory virus transmission,” said the World Health Organization in a statement to Nature.

Local data from the state of New York show a similar pattern. Although the flu season started a few weeks earlier than usual there, the rate of cases fell sharply and the season ended five weeks early. In Hong Kong, the 2019–20 influenza season was 63% shorter than those of the previous five years, and the number of deaths from lab-confirmed flu was 62% lower1. A similar decline was seen during the 2003 epidemic of the related coronavirus that causes SARS (severe acute respiratory syndrome).

Other infectious diseases might also have been affected this year, says study co-author, infectious-disease researcher Pak-leung Ho at the University of Hong Kong. In Hong Kong, compared with previous years, the number of chickenpox cases dropped by about half to three-quarters. In April, cases of measles and rubella were their lowest, globally, since at least 2016, according to provisional data available so far — only 36 cases of rubella were reported in April worldwide. Ho notes that typically these are diseases that affect children. “Closure of schools may have had the biggest impact,” he says.

Sexually transmitted infections (STIs) might also be affected, says Amanda Simanek, an epidemiologist at the University of Wisconsin–Milwaukee. Cases may decline in the absence of close contact, she says, but there may also be a decline in detection and treatment leading to a later surge. Other communicable diseases, such as tuberculosis, are more likely to see an upswing, because programmes to fight the disease have been derailed by the pandemic. The international organization the Stop TB Partnership released a report in May estimating that a 3-month lockdown and a 10-month period of recovery would cause an additional 1.37 million deaths globally during the next 5 years.

The flu season in the southern hemisphere is just starting (it typically peaks in July or August); it is unclear whether a similar flu trend will be seen there.