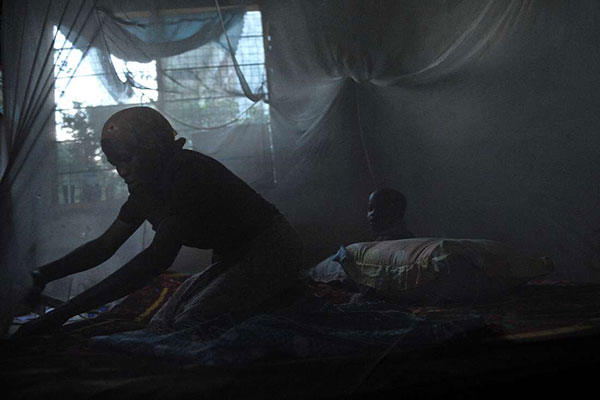 African nations grappling to contain coronavirus are scrambling to stop the outbreak worsening the impact of other killer diseases.

Across the continent, countries regularly face surges from a raft of diseases that flourish in the humid weather and prey on weak health systems.

Malaria strikes down hundreds of thousands each year, typhoid, measles and cholera are endemic to many areas, tuberculosis and HIV are particularly prevalent in southern Africa and the “meningitis belt” stretches from Senegal to Ethiopia.

Some countries like Nigeria or Democratic Republic of Congo (DRC) are especially susceptible and were already facing a constant battle on many fronts—even before the arrival of coronavirus.

In these volatile nations, factors from neglected healthcare facilities to rapid population growth, growing numbers flocking to cities, and climate change have combined to make the situation worse.

In Nigeria, Lassa fever, a haemorrhagic disease mainly spread by rats, has since January killed 200 people from around 5,000 infections—a figure that grows higher each year.

In DRC, Lassa fever’s far more deadly cousin Ebola has killed 3,000 since an outbreak started in August 2018 and new infections have stopped officials from declaring the crisis over.

Since January 2019 over 6,000 children across the country of 85 million have died from measles and 50,000 have fallen ill with it this year alone, Doctors Without Borders (MSF) says.

The World Health Organization (WHO) and other aid groups have sounded repeated alarms about the impact the coronavirus crisis could have on the fight against other diseases.

Malaria deaths could double if measures like mosquito nets are neglected, polio could roar back if vaccination programmes are halted, AIDS and tuberculosis fatalities could reach a million if anti-retroviral therapies are disrupted.

Years of vaccination campaigns have helped to bring some of the deadliest diseases under control—but there are fears that added burdens from coronavirus and challenges of social distancing could interrupt these efforts.

In Nigeria’s chaotic megacity of Lagos, where around 20 million people live crammed together, immunisation rates have reached up to 90 percent thanks to widespread pushes to boost awareness.

But those major successes risk being lost.

“Many medical facilities have closed down, people are afraid to go to the hospitals, and some of the regular vaccination activities are disturbed,” Dr Anisur Rahman Siddique, who heads Unicef’s immunisation programmes in Nigeria, told AFP.

“We need to keep on checking,” he said, pointing especially to a possible rise in measles.

Officials in numerous countries have warned that a focus on tackling coronavirus could rob attention from other pressing threats.

A lawmaker in Angola called on the government to step up sanitation and fumigation in poor neighbourhoods to maintain the fight against malaria.

Nigeria, one of the last countries in the world to report wild poliovirus infections along with Afghanistan and Pakistan, was set to be declared officially free of the scourge in June after three years without a case.

WHO says that 2,500 of its staff and personnel from partner organisations are still continuing surveillance for any outbreaks of polio in Africa’s most populous nation.

But the “hard choice” was made to halt door-to-door vaccination campaigns that had already been hit by insecurity in the north of the country.

But what can be seen as a weakness could actually turn out to be a strength—and the experience of coping with these recurring epidemics could give countries a boost in handling coronavirus.

The same WHO network in Nigeria that has been used to combat polio and other diseases is now be used to help track and test for possible coronavirus outbreaks in remote areas.

In eastern Congo, the epicentre of the country’s Ebola outbreak, around 20 coronavirus cases had been registered by mid-May and the spread seems to have slowed.

“The response against Covid-19 in the east of the country appears to have born fruits,” a government report said.

Christian Happi, a professor at the infectious disease institute at Nigeria’s Redeemer’s University, told AFP that for Africa the fight against coronavirus was just “business as usual”.

“We don’t have the same technologies, we may not have resources, but we have the human skills to fight it: it’s something we are used to,” he said.

“Medical workers are experienced, they know how to manage these kind of emergency situations, there is less panic, fighting epidemics is part of our life.”