As the coronavirus drastically reorders society and economies, more Italians are returning to the agricultural jobs of their grandparents.

CORCOLLE, Italy — On a small farm outside Rome, workers crouched in the corridors of a cornfield and tended to stalks for the coming harvest. The ones from Morocco, Romania and Nigeria knew exactly what to do. It was the new Italian hires who needed help.

“These you have to get rid of,” the farm’s owner told Massimiliano Cassina, pointing at some cobs on the bottom of the plant.

Only weeks ago, Mr. Cassina, 52, was running a fabric company that had international clients and specialized in sports T-shirts. But the coronavirus pandemic that has killed more than 30,000 Italians and wrecked the national economy also dealt a deathblow to his business. Desperate for a paycheck, he became one of an increasing number of Italians seeking a future in the country’s agrarian past. 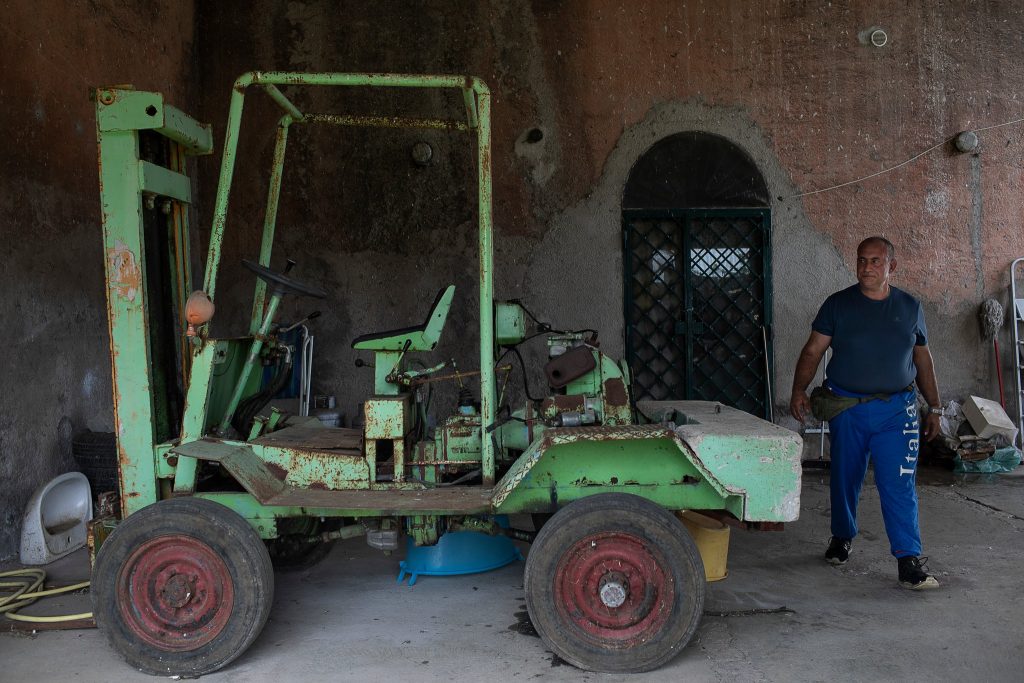 Massimiliano Cassina ran a fabric company which was forced to close during the pandemic. He now works as an agricultural laborer in Corcolle, near Rome.

Italy industrialized after World War II, and never really looked back. But the virus has drastically reordered society and economies, locking seasonal workers in their home countries while marooning Italians who worked in retail, entertainment, fashion and other once-mighty industries.

Where until recently a return to the land seemed reserved for natural wine hipsters or gentry sowing boutique gardens with ancient seeds, more Italians are now considering the work of their grandparents as laborers on the large farms that are increasingly essential to feed a paralyzed country and continent.

Without them, hundreds of tons of broccoli, fava beans, fruit and vegetables are in danger of withering on the vine or rotting on the ground.

“The virus has forced us to rethink the models of development and the way the country works,” Teresa Bellanova, Italy’s agricultural minister, who is herself a former farmhand, said in an interview.

She said that the virus required Italy, which has remained at the vanguard of the epidemic and its consequences in Europe, to confront “a scarcity of food for many levels of the population,” including unemployed young professionals, and that agriculture needed to be “where the new generations can find a future.”

To do that, agriculture needed to shake off the backward stigma of Europe’s preindustrial and pre-technological past and emphasize its use of sophisticated technology, machinery and chemistry. She said she had discussed such a shift with her French counterpart and the same was true for Spain and Germany and beyond as the virus laid waste to other sectors.

“Agriculture doesn’t mean a return to the hoe,” she said.

If Italians now need the fields to survive, the farms also suddenly need Italians. Despite vigorous lobbying by agricultural groups to create so-called Green Corridors to ease their arrival, about 150,000 seasonal workers from Romania, Poland, India and elsewhere are locked out of Italy.

At the same time, Italians, who previously constituted about 36 percent of Italy’s roughly 1 million agricultural workers, are finding their restaurants, tour companies and stores shuttered. The safer working conditions outdoors are proving attractive. So is a paycheck.

Italy’s leading agricultural associations have set up websites with names like Agrijob and Jobincountry and drawn more than 20,000 applications, most of them from Italians, to fill the shortfall.

“Manna from heaven,” is how Paolo Figna, 26, who lost his job as a waiter, described work picking strawberries on a farm outside Verona.

But the transition for many has not been easy. Agricultural work has become as foreign to Italians as the seasonal workers from other countries who have filled the ranks of farm hands for decades.

Massimiliano Giansanti, the president of Confagricoltura, one of Italy’s largest agricultural associations, said many of those who were interested in the work didn’t have the necessary training or experience.

“Agriculture is not picking a red apple from a tree,” he said, explaining that, far from the House and Garden idyll of the Italian imagination, farming was a modern industry that required know-how, commitment and flexibility.

For now, he said, “the majority” of the Italians inquiring about positions posted on the association’s Agrijob platform still considered it gardening.

Bruno Francescon, 45, the owner of a melon farm in Mantova, hired Italians who had worked in hotels and driven buses. He said he missed his “professionally very prepared” workers from India and Morocco. An influx of Italians, he said, “doesn’t compensate for the lack of skills.” And some of the Italians he hired simply “ran away.”

Others who have found themselves in the fields had envisioned a career connected to the land. Just not so connected.

Anna Flora, 23, grew up enchanted by stories of her grandfather’s horse farm, which he had to sell off because his children showed no interest in continuing. Her passion for the land remained, though, and in February she found a job selling hail insurance to farms around Italy.

But it was the virus that struck. The firm closed and she applied to sporting goods and pet food shops as a salesperson. They closed, too. Then her town of Ferrara advertised a program to replace the missing seasonal laborers with local workers and Ms. Flora applied.

After weeks of picking strawberries, she said she found the work fulfilling, but also gainful. Plus, she said, “My grandfather is very, very happy.” 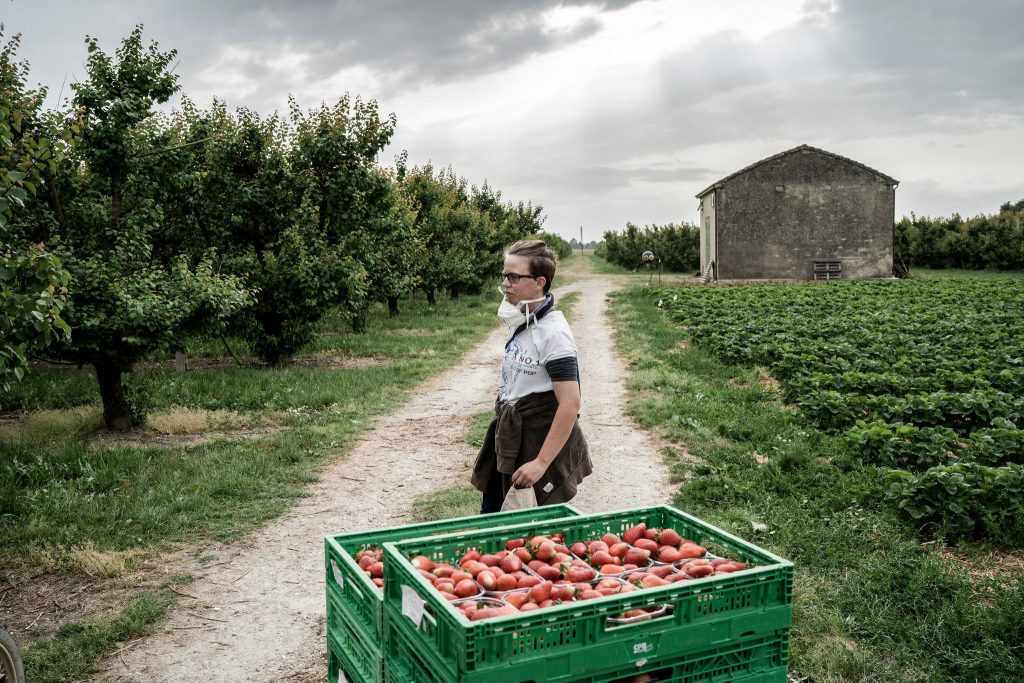 Anna Flora leaving the strawberry field after a day of work.

Ms. Flora was one of the more than 50 applicants for 12 positions posted on the Agrijob website to substitute for missing Polish workers at a farm owned by Franco Baraldi.

Mr. Baraldi, 59, said the Italians he hired — people who had worked in bakeries and cafes and supermarkets — didn’t know what they were doing in the beginning, but that they caught on. He said many hadn’t earned anything since March or received the help promised to them by the government. Several have asked him to stay on after the strawberry harvest for the apricot and peach season.

He said he hoped that they could, but that the future of agriculture depended on government help. Since his grandfather’s days running the farm, he said, the state had abandoned the industry. If the young didn’t follow their parents into the fields, it was because “no one helped them.” Without the subsidies given to other industries, he said, farms couldn’t make a profit, creating the conditions for unscrupulous landowners to underpay foreign workers.

This month, the Italian government set aside more than a billion euros (about $1.1 billion) of subsidies to farmers as part of a 55-billion-euro relief package. The measure became a source of acrimonious political debate, though, because it also included a pathway to legalization for undocumented workers in the fields.

Ms. Bellanova choked up in announcing the measure, which she said in an interview would help integration in Italy but also fill the shortfall of laborers created by the virus.

Critics said that legalization would do little to compensate for the labor shortfall, because those undocumented workers were already working the fields, just in exploitative conditions that grossly underpaid and overworked them. Populists both in and out of the Italian government argued that the minister was exploiting the epidemic to further a progressive agenda.

Austin Okoro, 25, a Nigerian with a work permit who picked corn with Mr. Cassina outside Rome, said his friends without legal status would jump at a job like his. But he also said that he didn’t begrudge the Italians who had joined him in the cornfield.

“They are doing fine,” he said with a smile.

The main question, though, remained the absence of trained seasonal workers and getting enough workers in time for the coming harvests.

Confagricoltura has organized flights carrying hundreds of Moroccan workers, paid for privately by farms, to arrive in Italy this week. A wine grower in the northern region of Alto Adige complained that the Italians he had hired bailed on him and so he chartered a flight to bring eight seasoned Romanian workers to his vineyard.

But compared with Germany, which has allowed for the arrival of tens of thousands of seasonal laborers, this amounted to a drop in the bucket.

Italy’s experience has been echoed in other parts of Europe. Prince Charles, Queen Elizabeth II’s eldest son and the heir to the British throne, has urged furloughed workers across the nation to join a government campaign aimed at finding farm labor to “pick for Britain” and save the season’s crops as the country faces a dearth of migrant workers. 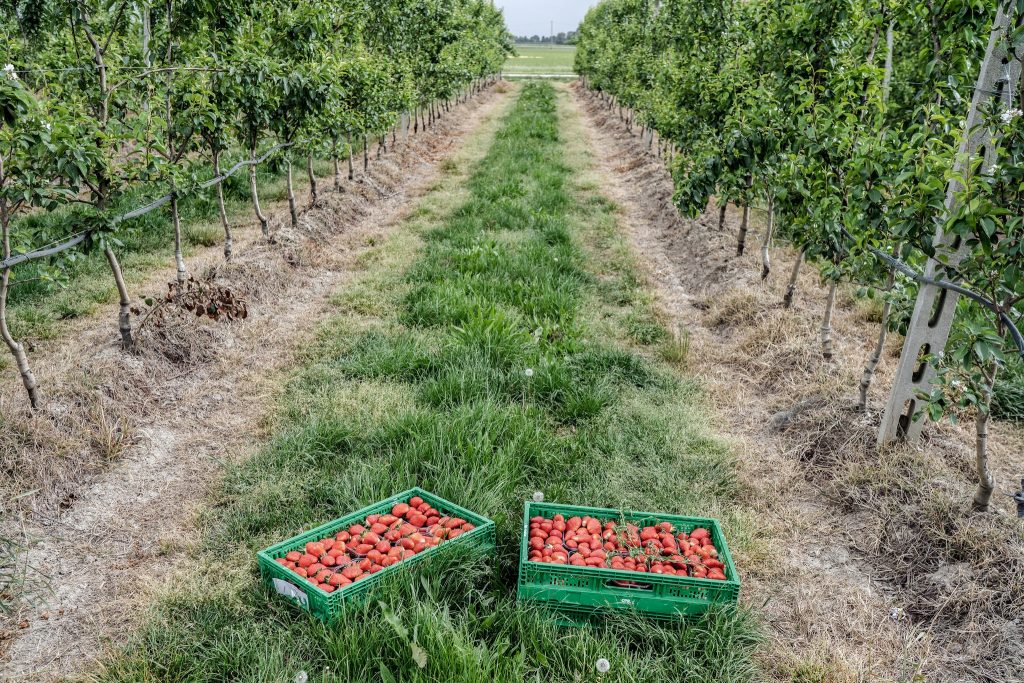 In Italy, some officials and farmers have looked for a potential pool of laborers among the poorest Italians, many of whom live in the country’s economically depressed south and who in 2018 started receiving a monthly universal income check.

Francesco D’Amore, who grows tomatoes near Caserta, in the southern region of Campania, burst out laughing when asked if he thought people would give up their guaranteed welfare checks to go back to the fields.

But this month, the government created the possibility for recipients of the benefit to put it on hold for up to 60 days if they found a job in agriculture.

Nazaro Lo Iacono, 56, who lives near Caserta and has received the basic income subsidy, said that with the new guarantee, he would happily let someone else temporarily take his welfare check and return to pick tomatoes, as he had done in his youth, as long as he received a proper contract.

The problem, he said, was that “dishonest” farm owners chased Italians away by slashing wages and underpaying exploited foreigners. “We grew distant from the earth for this reason,” he said.

Back in the cornfield, Mr. Cassina said he missed his old life as he got on his hands and knees, dirtying his shorts. The farm’s owner, Vittorio Galasso, 62, observed his progress.