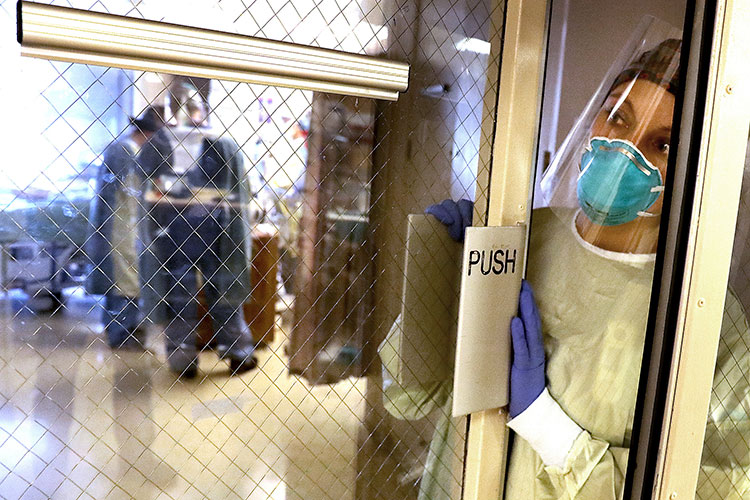 Hospitalized COVID-19 patients in the U.S. are enduring longer hospital stays and facing higher rates of intensive care unit (ICU) admission than patients in China, finds a new study led by researchers at the University of California, Berkeley, and Kaiser Permanente.

The results suggest that hospitals in the U.S. may be harder hit by the coronavirus pandemic than initially thought, as many forecasts of disease burden — particularly the number of hospital beds and ICU units needed at the peak of infection — are based on data out of China.

“The hospital resources needed to meet the needs of severely ill patients are substantial,” said Joseph Lewnard, an assistant professor of epidemiology at UC Berkeley and lead author of the paper. “We found that observations from China may not provide a sufficient basis for anticipating the U.S. health care demand.”

The study focused on 1,277 Kaiser Permanente members who were hospitalized with clinically- or laboratory-confirmed cases of COVID-19 between the start of the year and early April.

“Because Kaiser Permanente members receive comprehensive health care from a single provider network, we overcome many of the difficulties that arise in studies of diseases within the fragmented U.S. health care delivery system,” said Lewnard.

Despite the grim forecast for hospitals, the report does offer a glimmer of hope: Estimates of transmission intensity, based on extrapolations of infection rates from hospitalization data, indicate that the social distancing measures in the region are succeeding at flattening the curve of contagion.

“When people engaged in protecting themselves and their communities through social distancing, their efforts translated into a substantial reduction in the transmissibility of the disease,” said Vincent Liu, a research scientist at the Kaiser Permanente Division of Research in Northern California and co-author of the paper. “Those efforts are going to be critical for this next phase, in which social distancing measures are gradually relaxed. We need our communities to stay really engaged, because these data show that even the actions of individuals and small groups can really impact the spread of the virus.”

The results appeared online May 22 in The BMJ.

Of the 1,277 Kaiser Permanente members who were hospitalized with COVID-19, 42% required care in the ICU, and 18% died from the disease. Modeling estimates based on observations in China usually assume that only about 30% of hospitalized patients will require ICU care.

Similarly, the data showed that hospital stays lasted an average of 10.7 days for survivors and 13.7 days for non-survivors, compared to an average of 7.5 days among non-survivors in China. Troublingly, 25% of patients were hospitalized for 16 days or more. In comparison, a widely-used modeling study from Imperial College London projecting health care needs assumes an average stay of eight days.

While the underlying reasons for these discrepancies remain unclear, the authors stress the need to collect data in different regions and under different health care settings and caution against heavy reliance on models based on data from other countries.

“The spread of COVID-19 and its impact on local health care systems show differences across the world,” Liu said. “Health care systems differ, and their capabilities and structure have an effect on the local response and the impact of the surge. So, it’s really important to understand how our own data agree with, or in some cases differ from, the experience we’ve seen in other countries.”

Estimates of transmission intensity over time yielded promising results. The team found that the transmission rate of the virus has decreased significantly, and the drop began slightly before statewide shelter-in-place orders went into effect in late March. This effect is likely due to the implementation of smaller-scale social distancing measures, such as local restrictions on gatherings and individuals’ compliance with safety recommendations, in the weeks prior to the statewide orders, the authors said.

However, while the data indicate that social distancing is succeeding, the authors warn that we shouldn’t expect to return to normal anytime soon.

“These data suggest that if we were to release all of our mitigation measures at one time, the disease would start rapidly spreading again,” Liu said. “We have to be really strategic and vigilant about how and when we roll back our social distancing measures. It’s going to require coordination between health care systems, community partners, government and public health agencies, academic institutions and industry.”

“We also need to be mindful of just how severe the disease is,” Lewnard added. “We see an 18% overall fatality rate among all people who are getting hospitalized, and 42% end up in the ICU, so the impact of transmission in terms of severe disease and hospital burden is quite high.”

The study was funded by Kaiser Permanente.