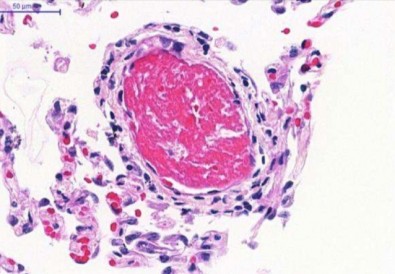 The hypothesis that blood clotting disorders may explain some of the worst symptoms of COVID-19, including respiratory failure and pulmonary fibrosis, was suggested in mid-April by researchers in Brazil affiliated with the University of São Paulo’s Medical School (FM-USP) via an article accepted for publication by the Journal of Thrombosis.

In less than a month, the topic had been highlighted in articles posted to the websites of Science and Nature, both of which are among the world’s leading scientific publications.

One of the first scientists to report the “thrombotic nature” of the disease caused by the novel coronavirus (SARS-CoV-2) was Elnara Negri, a researcher and pulmonologist at Hospital das Clínicas, the hospital complex run by FM-USP – the largest in Latin America – and Hospital Sírio-Libanês, a leading private hospital also in São Paulo City.

“Around March 25, we were treating a patient whose breathing was rapidly deteriorating,” Negri told Agência FAPESP. “When she was intubated, I observed that her lungs were easy to ventilate. They weren’t hardened and stiff, as you’d expect in someone with acute respiratory distress. Shortly thereafter, I noticed that the patient had an ischemic toe.”

The latter condition has been referred to as COVID-toe and can affect all ten toes. It is caused by the obstruction of the small blood vessels that circulate blood in the feet. Negri observed a similar phenomenon many years ago in patients who underwent open heart surgery with extracorporeal circulation.

“In the old days, a device was used to pump oxygen into the blood, and clots would form inside the blood vessels. I’d seen the condition before and knew how to treat it,” she said.

Negri prescribed heparin, one of the most widely used anti-coagulant drugs worldwide. In under 18 hours, the patient’s oxygen saturation improved, and her angry red toe regained a healthy pink color. The same effect was achieved with other patients treated at the Sírio-Libanês. “Since that day, we’ve treated approximately 80 COVID-19 patients, and so far, none of them has died. Four are currently in the ICU [intensive care unit]. The rest are in the ward or have been discharged,” Negri said.

Most studies show that severe COVID-19 patients require 28 days of mechanical ventilation on average, whereas those treated with heparin typically improve after ten to 14 days of intensive care.

An article by Negri and colleagues describing their clinical experience with the first 27 patients who were treated with the protocol developed at Sírio-Libanês is available on medRxiv as a preprint (not yet peer-reviewed) version.

Shortly after the first successful administration of heparin, Negri shared the finding with colleagues Marisa Dolhnikoff and Paulo Saldiva, pathologists at FM-USP who are coordinating the autopsies of patients who die from COVID-19 at Hospital das Clínicas.

Using a minimally invasive technique developed during a project supported by FAPESP, the pathologists observed focal bleeding associated with mini-clots (microthrombi) in the small blood vessels of the lungs due to platelet clumping (more at: agencia.fapesp.br/32955 and agencia.fapesp.br/32810).

Negri, Dolhnikoff, Saldiva and colleagues recently wrote to the editor of the Journal of Thrombosis and Haemostasis, describing their findings. Entitled “Pathological evidence of pulmonary thrombotic phenomena in severe COVID-19”, this is the first article in the scientific literature to report this topic. Fully peer-reviewed and accepted for publication by the journal, the study could potentially revolutionize treatment of the disease.

“Patients with SARS or MERS develop a strong inflammatory reaction in the lungs, and this can lead to a condition known as acute respiratory distress,” Negri said. “The pulmonary alveoli, the tiny sacs in which carbon dioxide is exchanged for oxygen, fill up with dead cells, pus, and other inflammatory substances, hardening the lung tissue and impairing oxygenation of the organism.”

COVID-19 is different, at least initially, Negri added. SARS-CoV-2 does not cause severe inflammation of the lungs but does cause desquamation of the alveolar epithelial tissue.

“The epithelial cells die after being infected, fall into the alveolar lumen and leave the basement membrane exposed,” she said. “The organism’s defense system thinks the region is raw or ulcerated and assumes there’s a risk of hemorrhage, triggering a storm of interleukins [proteins that act as immune signalers] and what we call a ‘coagulation cascade’. The platelets begin clumping together to form clots and ‘plug the leak’.”

The clots block the lung’s small blood vessels and cause microinfarcts (cellular death or tissue necrosis). The regions of tissue that die due to a lack of blood supply are replaced by scar tissue in a process called fibrosis. In addition, microthrombi at the alveolar-blood vessel interface prevent the passage of oxygen to smaller arteries.

“This explains why COVID-19 patients may not have difficulty breathing even though their oxygen saturation is low. Many come to hospital walking and talking and very soon have to be intubated,” Negri said.

If the intravascular clotting is not rapidly treated, microinfarcts and fibrosis tend to spread throughout the lungs. Opportunistic bacteria and fungi may infect the damaged tissue and cause pneumonia, as SARS-CoV-2 leads to a decrease in the number of immune cells (lymphopenia). The patient may develop acute respiratory distress at the end of this process.

Heparin helps avert this outcome via two mechanisms. Negri found that the drug dissolves the microthrombi that prevent oxygen from flowing from the alveoli to the pulmonary blood vessels and contributes to the regeneration of the vascular endothelium, the layer of epithelial cells that line the interior of blood vessels.

“Damaged endothelium is like a road full of potholes. It hinders the flow of blood and leads to more clotting. This creates a snowball effect,” Negri said.

A third possible mechanism of action of heparin was described by a study recently conducted at the Federal University of São Paulo (UNIFESP) with FAPESP’s support. In vitro experiments by the biomedical scientist Helena Bonciani Nader and colleagues showed that heparin brings about a 70% reduction in cell invasion by SARS-CoV-2 (more at: agencia.fapesp.br/33200).

“There may be an anti-viral effect, which should be investigated in greater depth. As I like to say, we’re changing tires without stopping the car,” Negri said.

In Negri’s opinion, however, many lives may have been lost because patients diagnosed with COVID-19 were treated from the start as cases of acute respiratory syndrome and placed in ICU beds with lower levels of hydration and more intense mechanical ventilation. “These two approaches worsen the thrombotic condition. We need to change the treatment paradigm,” she said.

Negri would like heparin to be administered as soon as the oxygen saturation level falls below 93%, which may happen between the seventh and tenth days after the onset of flu-like symptoms and can be detected by a physician in a private or public clinic.

“It’s pointless to buy the drug from a pharmacy and swallow a pill,” she warned. “That will have no therapeutic effect and could cause bleeding. It must be injected, and a medic must calculate the right dose.”

It should be stressed that heparin has significant effects on various physiological processes, and if the drug is administered without medical supervision, it can endanger the patient’s life. Self-medication and failure to take side effects into account are particularly hazardous in the case of treatment for COVID-19.

A randomized clinical trial will be needed to demonstrate the therapeutic efficacy of heparin in COVID-19 patients. This means there need to be two randomly chosen groups with similar characteristics, only one of which receives the drug. The results for this group are then compared with the outcomes for the group not given the drug.

“The trial will entail giving heparin to patients who come to the outpatient clinic with low oxygen saturation levels and seeing if treatment with the anti-coagulant can avoid the need for mechanical ventilation,” Negri said.