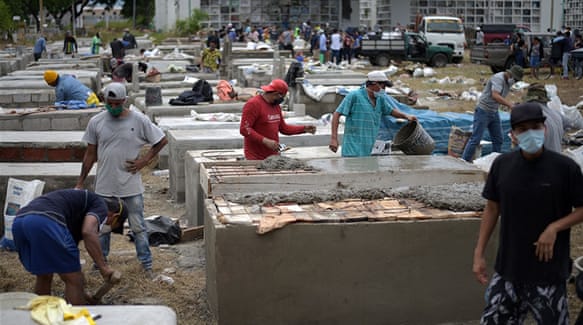 When Victoria Sanchez and her mother, Eufemia Nicolaza Sanches Pin, showed up at their local public hospital in Ecuador’s Guayaquil for Sanches Pin’s weekly dialysis treatment last month, hospital staff refused to let the mother, a diabetic, in because she had a runny nose.

Hospital staff worried it could be COVID-19 and said they could not risk exposing other patients in the dialysis ward, Sanchez says they told her.

With no money to go to a private clinic or pay for transportation fees to get to the other two public hospitals at the opposite end of the city, the mother and daughter went home.

A doctor later confirmed the runny nose was caused by a throat infection. Sanchez’s mother quickly grew too weak to move on her own. A week later, she was dead.

Following Sanches Pin’s death, Sanchez called the emergency lines, but no one would come to pick up her mother’s body in their neighbourhood of Monte Sinai, which lies on the northern periphery of the city. The body stayed in the house for four days, while Sanchez ran around the city looking for a coffin and a cemetery she could afford. She eventually asked her church community for help, who built a coffin for free and helped raise funds for a cheaper cemetery plot in the neighbouring district.

“Thank god, otherwise, I wouldn’t have been able to bury her,” Sanchez says, through heavy tears. “I feel anger and sadness, because maybe if someone would have helped at some point, she would still be with us.” 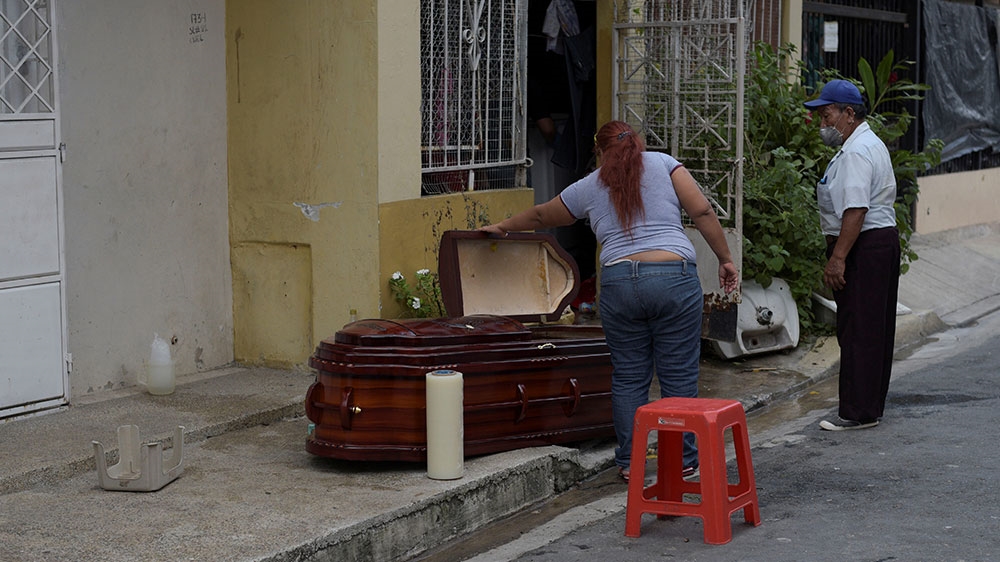 A woman looks into a coffin holding the dead body of her mother after she died at home during the outbreak of the coronavirus disease (COVID-19), in Guayaquil, Ecuador

Sanchez is not alone. Ecuador’s coastal city of Guayaquil has been one of the hardest-hit areas of COVID-19 in Latin America. Last month, photos of dead bodies lying in the streets or on park benches flooded social media, showing the collapse of the local healthcare and mortuary systems.

According to official figures, there were 37,355 confirmed coronavirus cases and 3,203 COVID-19-linked deaths in Ecuador as of Monday, but many say the numbers are drastically underreported. Last month, the state registry released data showing that over 10,000 deaths were recorded for the months of March and April, just for the province of Guayas, where Guayaquil is located. Officials say this is nearly 6,000 more deaths than the same time period in the last two years, leading many to conclude that the vast majority are COVID-19 related. They also include deaths that could have been prevented had the healthcare system not collapsed under the weight of COVID-19, yet no data exists to make this differentiation.

Human rights workers say the virus has highlighted the city’s vast social inequalities, and has disproportionately affected working-class families. Many of these families now find themselves jobless, turned away from saturated public hospitals, facing inflated costs of medication and mortuary services, and having to adapt to a quarantine they cannot afford.

Waiting 2-7 days for bodies to be picked up

Billy Navarrete, director of the Committee for the Defense of Human Rights in Guayaquil, said at the peak of the crisis at the end of March, he received more than 100 messages and phone calls in just one weekend from families reporting that officials had not come to pick up the dead body of their recently deceased family member. These families had been waiting anywhere from two to seven days for these bodies to be picked up. In some cases, they were forced to put the cadavers on the street, either for fear of contagion or to escape the smell of decomposition.

“There were an infinite amount of testimonies,” Navarrete said.

“All of them were from lower-class neighbourhoods,” he told Al Jazeera.

Some of these neighbourhoods include Monte Sinai, Bastion Popular, Suburbio, and Trinitaria in the northern and southern peripheries of the city. Many of these communities do not have access to basic services like sewage systems or drinking water, and have high population densities. These provide the perfect conditions for a virus to spread, Navarrete said.

Luis Alfonso Saltos, architect and urban planner in Guayaquil, said people who live in peripheral regions that lack infrastructure would inevitably end up being more exposed to the virus, and carrying it greater distances, as they are forced to leave their home or neighbourhood to find basic necessities.

“Understand citizen logic. If you don’t have water in your house or a store nearby, that obliges you to have to leave and find it,” Saltos said.

In April, Saltos collaborated with local journalist Blanca Moncaya to collect and map reports left by families on social media platforms, begging for help to remove the cadavers of their loved ones from their homes. The map indicates that the vast majority of these reports came from either the city centre, where there was a large flow of people, or in the peripheral areas in the north of the city, where there are higher population densities and lack of infrastructure, he said. Although this data is not conclusive, it provides an idea of the dynamics of the virus, he added.

Despite being the commercial capital of Ecuador, Guayaquil is one of the most unequal cities in the country. It has the highest poverty rate, at 14 percent, and the highest rate of workers in the informal economy. Nearly half of the working population in the city work in the informal sector, according to the national statistics institute. The informal sector includes jobs like street vendors and domestic workers, those who live off their daily wages with no social security benefits, and earn well below the national minimum wage of $400 per month.

Ecuador’s strict quarantine measures have weighed particularly heavily on these families in Guayaquil. Like most places in the world, lockdown measures include social distancing and the prohibition of all non-essential businesses, but it also includes a strict 2pm curfew, enforced by military and police, that has been in effect since mid-March.

“I don’t agree with the government who always blames the people for not staying at home. You can stay at home when you have your necessities met, and savings in the bank,” said Giselle Viteri Cevallos, with the local organisation Asphalt Women (Mujeres de Asfalto) that promotes the rights of women of African descendent.

Many people continue to leave their homes every day to sell lemons and toilet paper on the street, she said.

The coronavirus has also disproportionately affected African descendent communities in Guayaquil, which has the largest Black population of any city in Ecuador. Most in this community are informal workers who live in the same marginalised areas that were harshly affected, said Viteri. Not a day goes by that she does not get news that someone she knows has died, she added.

Compounding the situation is the country’s healthcare system, experts say. Ecuador has a three-tier healthcare system, which includes public hospitals that serve everyone; social security hospitals, generally for people with permanent jobs who pay into the system; and private clinics.

Ricardo Ramirez Aguirre, a retired physician in Guayaquil and head of a regional Anti-Corruption Commission, said the public and social security hospitals in the coastal city have shown “improper handling” of the COVID-19 crisis. Several people have reported hospitals turning away non-COVID-19 patients, leaving them with nowhere to go. Others reported that hospitals not designated to treat coronavirus were turning away patients with dengue thinking it was COVID-19. 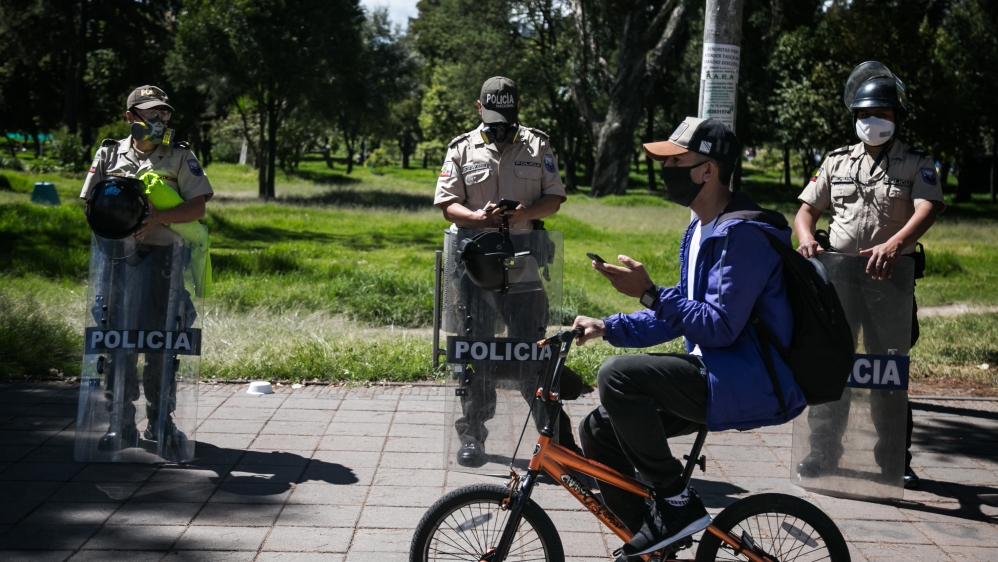 Thousands of Ecuadorians took to the streets on Monday to protest austerity policies implemented by the government. Big rallies organised by unions and other social organisations were seen in cities such as Quito, Guayaquil, Cuenca, Latacunga, Ibarra, Machala and Urcuqui

The problem is due to historic mismanagement of the public healthcare system, said Ramirez, which has worsened since President Lenin Moreno reportedly cut nearly 4,000 jobs in the healthcare sector nationwide last year. During the pandemic, the government also failed to provide protective gear to hospitals or assure long term job security for new recruits, so many healthcare workers refused to fill necessary positions, said Ramirez. At least 117 doctors and nurses lost their lives while treating COVID-19 infections in the province of Guayas alone, according to local unions.

Those most affected by these hospital conditions have been the marginalised urban sectors, according to Ramirez, where families survive off of their daily income so have been unable to maintain quarantine.

“It’s from here that many of the patients come from who go to public and social security hospitals, because the transmissibility is higher in these conditions,” he said.

Apart from saturated hospitals, one of the biggest struggles for families is paying for medication and mortuary services, as high demand has shot up prices. Paracetamol that normally costs $0.25 a pill can no longer be found in pharmacies, but is being sold for $4.00 in informal commercial areas, said Viteri. Some families have also been forced to go into debt, as they try to pay the high costs of a coffin and cemetery plot, which could range from $3,000 to $5,000, for their deceased family members.

Earlier this month, UN Deputy Secretary-General Amina Mohammed warned the global crisis is a health, humanitarian and development emergency, which will hit the most vulnerable populations hardest. She also urged governments to address the inequalities in their country, saying “We have a unique opportunity now, to leverage this crisis to kick-start a Decade of Action to deliver the Sustainable Development Goals (SDGs).” 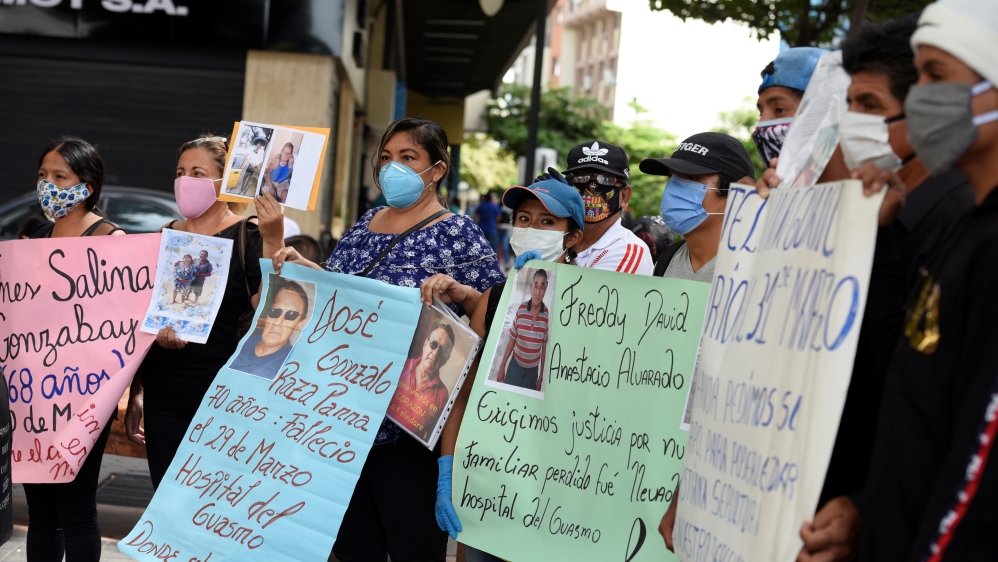 Families, who are looking for their deceased loved ones who have been lost or misidentified during the outbreak of the coronavirus disease (COVID-19), hold signs during a protest, in Guayaquil

Navarrete said Guayaquil has stabilised over the past month, since the central government created a special taskforce to collect the cadavers piling up in homes and city streets, after reports of the bodies exploded across international media. But the government still is not doing enough to help lower-class families, he added. The Ministry of Interior did not respond to several requests for comment by the time of publication.

By the third week in April, Guayaquil Mayor Cyntia Viteri announced a series of initiatives, including the implementation of testing and medical teams in the most affected marginalised communities. The city government also began a weekly project, called the “Strategic Plan for Door-to-Door Service”, to deliver more than 100,000 food rations to the most affected areas of the city, according to the mayor’s press office.

“We are working intensely on all fronts to help citizens,” the mayor’s office told Al Jazeera.

Back in her neighbourhood of Monte Sinai, Sanchez says she received donations from the municipality at the beginning of April, but it has not come back. Many people in her community are hungry and anxious, she says.

“It’s hard to see all of this. I feel powerless at times not being able to help,” Sanchez says. “I want to, but I can’t.”

Thinking back to the night of her mother’s death, she remembers how often she tried calling officials for help, but it never arrived.

“They said to call back, but when I did, nothing. No matter how much I called, I never got help. I never even got to speak to a doctor or anything like that,” Sanchez says. “I wish I could have done more, but I couldn’t do it.”