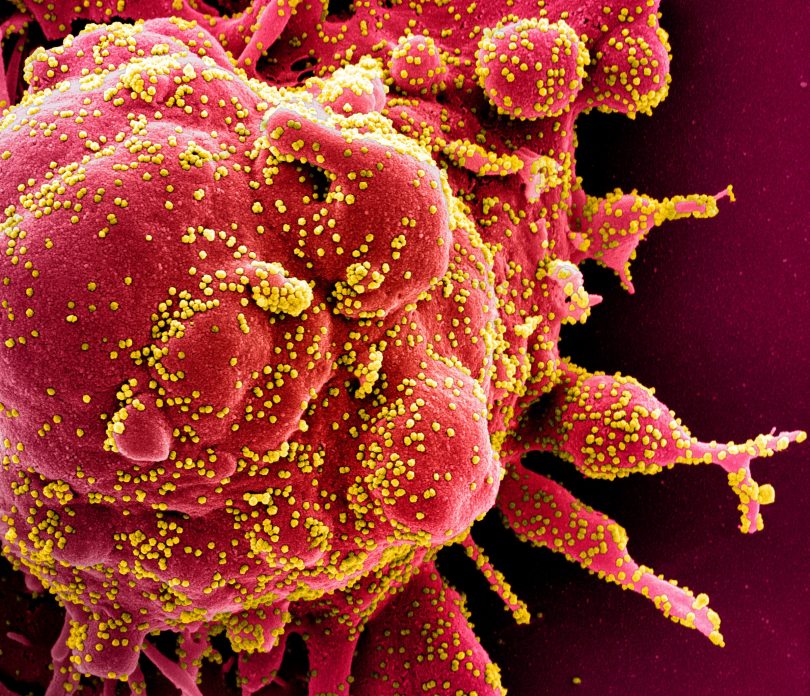 THE PRESIDENT CALLS SARS-CoV-2 the “invisible enemy.” Sure, at some 0.000003 inches across, the virus evades the naked eye. But luckily for us, virologists have a tool to render the pathogen quite visible, thanks to British physicist Joseph John Thomson. In 1897, Thomson discovered the electron, a particle too teensy to be measured. Just over 30 years later, scientists proved it’s also a wave that magnets can bend, just as lenses deflect light. Those discoveries birthed the electron microscope and fuzzy pictures, or micrographs, of the virosphere.

Today virologists can watch pathogens attack cells. That’s what those yellow dots (aka SARS-CoV-2) are doing in this 30,000X magnification of vervet monkey cells. “People think we’re trying to make them look scary,” says microscopist John Bernbaum, whose team at the National Institute of Allergy and Infectious Diseases captured and colorized this image in March to better understand the virus. “But we just try to come up with pleasing color combinations.”

Bernbaum used a scanning electron microscope, known for creating sculptural, 3D views. A field emission gun fires electrons down a vacuum chamber and past electromagnets that focus them into a beam. Some bounce back up into a detector, which lets Bernbaum follow along on his computer screen. He snaps pictures when he sees something important—or just plain wild. “It’s like being in a car, just driving and looking at the landscape.” The cells in this specimen were mostly flat, so when he noticed them forming blobby outgrowths called blebs, he perked up. Blebs signal cell suicide; when stressed cells start chopping up their own proteins, their membranes distend. “You start having these projections coming off the main body, with viruses heavily attached.” That, he says, suggests the viruses were trying to reach other cells.

In February, a team at the University of Texas at Austin used a fancier electron microscopy technique, freezing specimens at temperatures colder than Pluto to create a 3D model of the spike protein that SARS-CoV-2 employs to latch onto cells. It was used to design a vaccine now in trials, says lab director Jason McLellan. “Knowing what the enemy looks like helps us fight it.”