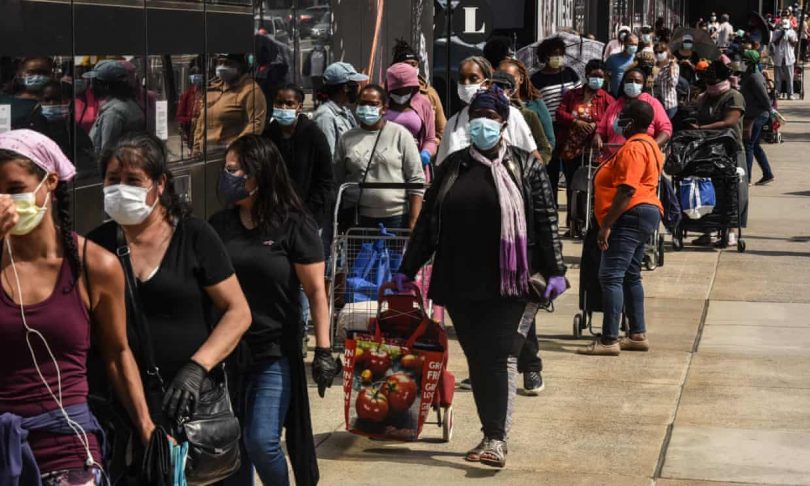 A record number of Americans face hunger this year as the catastrophic economic fallout caused by the coronavirus pandemic looks set to leave tens of millions of people unable to buy enough food to feed their families.

Nationwide, the demand for aid at food banks and pantries has soared since the virus forced the economy to be shutdown, resulting in more than 40m new unemployment benefit claims, according to the latest figures.

As a result, an estimated one in four children, the equivalent of 18 million minors, could need food aid this year – a 63% increase compared to 2018.

Overall, about 54 million people across the US could go hungry without help from food banks, food stamps and other aid, according to an analysis by Feeding America, the national food bank network.

America’s food insecurity crisis was dire even before the Covid-19 pandemic, when at least 37 million people lived in households without adequate resources to guarantee consistent access to enough food for an active, healthy life.

Food insecurity varies vastly from state to state, and county to county, and had only recently fallen to pre-Great Recession levels. The current crisis will almost certainly reverse hard-fought for improvements, and exacerbate existing inequalities.

It’s in southern states where the economic impact and food insecurity will probably penetrate deepest: more than 11 million people in the states of Louisiana, Arkansas, Alabama, Mississippi, New Mexico, Texas and Tennessee are projected to suffer food insecurity in 2020.

In Mississippi, proportionately the worst-affected state before and since the pandemic, almost three-quarters of a million people could need food aid this year, including one in every three children.

Further west, tourist mecca Las Vegas is bracing itself for tough times as even the casinos, hotels and restaurants which survive the shutdown will take months to fully reopen.

“We were on the precipice of being the first food bank to meet the meal gap but we just don’t have the food sources to meet this sudden, dramatic increase. We have to completely retool our organization to accommodate this,” said Larry Scott, chief operating officer of the Three Square food bank in the city.

Here, about 65% more food aid will be needed to stop people from going hungry: one of the biggest jumps in the country. “People are going to go hungry, that’s the truth,” said Scott.

The situation looks dire statewide: one in three children and one in five adults in Nevada are projected to suffer from food insecurity this year – a rise of almost 60% since 2018.

Why? The Nevada jobless figure is higher than any state ever, including during the Great Depression, signaling an extraordinary turnabout in fortune after unemployment hit an all-time-low in February.

“This pandemic continues to impact the lives and livelihoods of our neighbors nationwide, putting millions of additional people at risk of hunger while continuing to hurt people already familiar with hardship,” said Claire Babineaux-Fontenot, CEO of Feeding America. 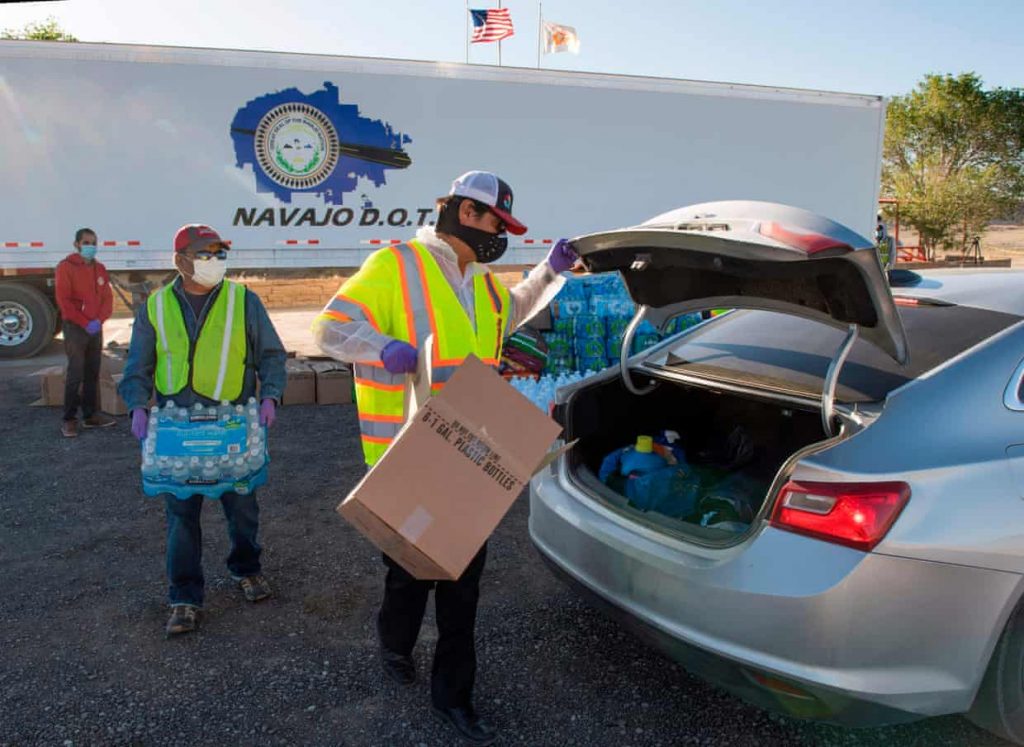 Cars line up for a Navajo Nation food bank donation in New Mexico.

On Thursday in Tucson, Arizona, 1,400 or so cars lined up at a mobile distribution point, which was open for three hours, for grocery boxes of canned fruits, pinto beans, pasta, milk, fresh vegetables, frozen meat and bread, to help make ends meet for a month.

Historically, there was a shortfall of 34m meals every year in the five counties served by the Community Food Bank of southern Arizona. Currently, the demand remains sky high – double pre-pandemic levels, and statewide 17% of the workforce have claimed unemployment since the start of the crisis.

“We were getting darn close to closing the meal gap before the crisis,” said Michael McDonald, the CEO. “But if demand continues at this rate for the rest of the year or into next year, we’re going to fall way short. I don’t see us being able to keep up without a longer-term commitment from the federal government.”

One in three children in Arizona could go hungry this year without food aid.

Food banks aren’t in it alone.

Record numbers of people have applied for food stamps, and advocates are pushing for the bump in how much people receive to be included in the next federal relief package, pointing to individual and wider economic benefits. Research shows that every $1bn spent on food stamps results in $1.54bn being added to gross domestic product.

In addition, the US department of agriculture (USDA)’s $3bn coronavirus Farmers to Families Food Box programme has started delivering truckloads of surplus perishable produce like milk, meat and vegetables to food banks and pantries.

But it’s unclear how long this and other federal aid will last, which is causing advocates sleepless nights.

“Everything feels so unpredictable, I’ve literally no idea what’s going to happen in three months, and we got the short end of the stick from the USDA,” said Christina Maxwell, director of programs at the Food Bank of Western Massachusetts.

In this region, one in six is expected to suffer food insecurity in 2020 – a 50% rise due to Covid-19, with predominantly black and brown urban areas hardest hit. Only a tiny fraction of the USDA contracts went to distributors in New England.

As states start to reopen for business, economic recovery is expected to be painfully slow especially if further outbreaks are not adequately contained, which could trigger a full-blown second wave of the pandemic. Underemployment could last for years, which means millions of Americans are likely to need help with food, utilities and rent in the medium and long term.

Los Angeles county, where almost half the state of California’s Covid-19 cases have been confirmed, is projected to have 1.68 million food insecure people this year – the highest number in the country. It’s the most populous county in the US, with 10 million residents, where unemployment has risen to 20.3% – five percentage points higher than the state average – and food stamp applications have almost tripled compared with last year.

“If the numbers stay like this, no way food banks can cope, it’s beyond our capabilities, a lot will depend on how long federal help lasts,” said Michael Flood, president of the Los Angeles Food Bank, which has distributed 80% more groceries since the pandemic began.

Susan King, president of Feeding Northeast Florida, agrees: “It’s when the dust settles that I’m most worried about, when the federal and state help is over but the line of people waiting for food is still long.”

King added: “This is a marathon, we can’t sugarcoat how scary it is; it absolutely keeps me up at night.”