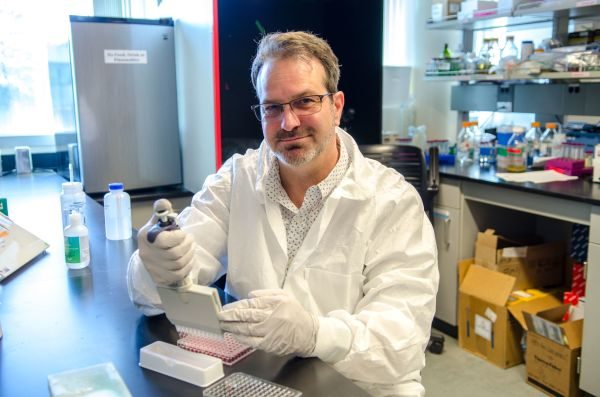 C. Todd French, assistant professor of biology and leader of Northern Arizona University’s new COVID-19 Testing Service Center (CTSC), is working with scientists at Vault Pharma, an emerging biotechnology company, to test candidate vaccines against the novel coronavirus. Through a multi-institutional public-private partnership linking the company with UCLA, NAU and the University of Nebraska–Lincoln, French is part of a collaborative team advancing a vaccine that has the potential to treat the virus in addition to protecting against it.

Vault Pharma creates genetically modified versions of vaults—naturally occurring nanoparticles found inside every cell of the human body—that can be bioengineered and used as drug delivery devices. So small that they are measured in nanometers (one nanometer equals one billionth of a meter), vaults were first discovered in 1986 by a lab group led by Vault Pharma co-founder Leonard H. Rome, distinguished professor of biological chemistry and associate director of the California NanoSystems Institute (CNSI) at UCLA. Vault Pharma is designing its vault vaccine with the Rome Lab and the research team led by Jeff F. Miller, UCLA’s Fred Kavli Professor of NanoSystems Sciences and the director of CNSI.

“Vaults are unique, hollow, natural protein nanoparticles,” said French, “named for their barrel-like structure. They have tremendous potential as a vaccine delivery platform when loaded with vaccine antigens. I’ve been a proponent of the vault vaccine platform for a long time, and I’m excited that UCLA and Vault Pharma want to work with us at NAU.”

As with typical vaccines, the team’s vault-based strategy is intended to stop infection before it starts by activating the antibodies in the immune system, which neutralize foreign microbes floating around in bodily fluids and tag them for elimination by immune cells. The researchers are choosing which coronavirus proteins to package inside vaults to stimulate the immune response.

Although it would not provide a frontline defense, the vault-based coronavirus vaccine in development is intended to be used against the disease after an initial vaccine has been developed and distributed, and could represent a step toward blocking the outbreak of a similar virus in the future.

The team at Vault Pharma has evidence suggesting that a vault-based vaccine could also work as a therapeutic. While the vault platform hasn’t yet been tested in humans, proof-of-concept studies indicate that vaults themselves don’t set off an immune attack but are readily internalized by multiple cells of the immune system.

“We established the CTSC at NAU to aid in the search for potential therapeutics that can inhibit the coronavirus in vitro. This summer, we will be bringing online the ability to test potential treatments and vaccines in COVID models, as well,” French said.

Plans for manufacturing the vault-based vaccine are in progress. As the project moves toward trials in humans, production of vaccine-laden vaults will be scaled up at the University of Nebraska–Lincoln.