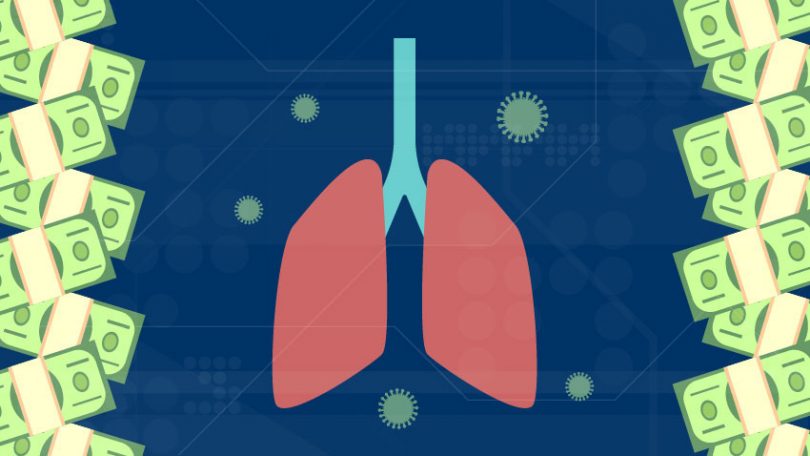 Long hospitalizations lead to large medical bills, with serious physical and emotional consequences for those recovering from critical illness.

It begins with shortness of breath. And for approximately one third of patients, acute respiratory distress syndrome, or ARDS, ends in death. For those who survive, their lives are often turned upside-down. Michigan Medicine researchers have been investigating the downstream effects of ARDS for years. As the COVID-19 pandemic rages on, their work has relevance for hundreds of thousands of new patients.

“The way COVID-19 kills patients is by depriving them from oxygen,” says Theodore (Jack) Iwashyna, M.D., professor of critical care medicine. “But only a third or fewer of COVID-19 patients who develop respiratory failure die. Most survive, and we need research that helps them not just survive but really heal.”

A team led by Iwashyna wanted to look more closely at how being hospitalized for ARDS affected people months after they were discharged. They interviewed dozens of patients from around the nation. “As we knew from past research, people had new disabilities ranging from general fatigue and weakness to where they couldn’t remember things,” says Katrina Hauschildt of the U-M department of sociology and first author on the study. “A lot of people had emotional difficulties coming to terms with just how sick they had been—a kind of PTSD from being in the ICU.”

“What I didn’t expect,” says Iwashyna, “was the lasting chaos into which surviving respiratory failure threw some of our patients and their families. Patients described problems coming not just from medical bills—although there were plenty of those—but also from losing their jobs and losing their insurance.” Given the magnitude of recession hitting at the same time as patients are trying to recover from COVID-19, Iwashyna and Hauschildt are worried this could be devastating for many families.

One 55-year old man described having to give up his small business because he could not work after getting out of the intensive care unit (ICU). “I had to sell my business. I’m on disability now…I owned a fire prevention company…We used to clean the kitchen exhaust systems in restaurants throughout the state. Degreased the restaurants, like their exhaust hoods in the kitchen and on the roof…Yeah, I sold everything.”

The team found that many respiratory failure patients experience what is known as financial toxicity, defined as the financial burdens and related distress of medical care. In turn, this financial toxicity led to additional negative effects on their physical and emotional recovery.

With hospitalization for ARDS often resulting in weeks of high intensity care, patients end up with medical bills ranging from tens of thousands to, in some cases, millions of dollars, and the proportion covered by insurance varied substantially.

One 49-year old male survivor of ARDS told the study team “I barely make it, or my bills are pending like electricity, things and other stuff.” Said another 55-year old woman “I had to pay my rent, my food and medicines and all that so I was a little bit short … They were kind of difficult to pay after the hospital … Because I had to get more medicines and all that.”

The team reported several consequences of hospitalization including emotional distress related to insurance issues and unpaid bills, reduced physical well-being due to the inability to receive follow-up care due to cost, an increased reliance on family and friends to help cover expenses and other material hardships. Said one patient: “In the next couple of months, I may end up being homeless because of the financial aspect of it.”

While these cases may seem extreme, they were not rare. And many patients described having to make hard choices about whether they could afford rehabilitation—and stopping early when their coverage ran out, even though they were not yet recovered. A 51-year old man told the study team “[Physical therapy] was very short, a couple weeks maybe; then it was over, and I just laid around basically. My insurance did not cover any more, so they had to cut me.”

Another patient, a 61-year-old woman, described not having the equipment when she tried to go home: “I could pick one item that I wanted,” of the hospital bed, wheelchair, and walker she needed, “because the insurance would only pay for one item.”

Hauschildt says the study outlines the need for doctors to be more aware of the financial toxicity faced by survivors of ARDS, including those recovering from COVID-19. “One of the biggest things any doctor involved in follow up care can do is anticipate that patients might have real financial burdens and know what resources are available so they can help,” she adds.

However, she notes, what’s available is really up to policy makers. For example, the study found that patients who were already on public insurance before their illness reported less of an out-of-pocket financial impact. “Communities that put a safety net in place for ARDS and COVID-19 survivors will ultimately have better healing and recovery. People who heal are able to return to work and care for others and their communities; people who don’t aren’t.”

This work was supported by the National Institutes of Health, National Heart, Lung and Blood Institute as part of the Prevention and Early Treatment of Acute Lung Injury (PETAL) Network. The patients who participated in these interviews gave their consent for their words to be quoted, and were all about nine months after having had moderate to severe ARDS.